GBP/USD. Preview of the new week. In the UK, the second "wave" of the COVID-2019 epidemic began. 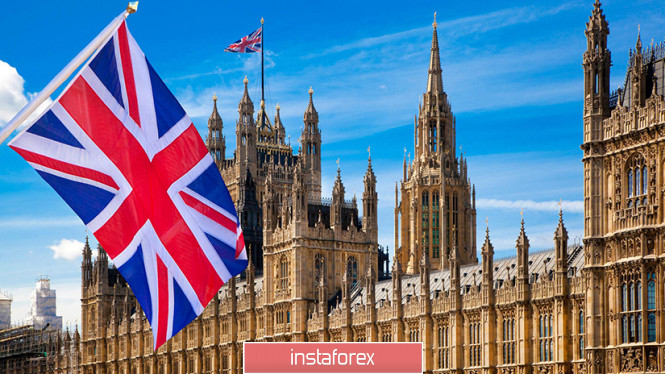 Trading the British pound has been more fun in recent weeks. Since September 1, the British currency has fallen by 700 points and then recovered by 200. Such a strong fall was triggered by the activities of Boris Johnson as Prime Minister of Great Britain. The results of his work in recent months are simply "amazing": all rounds of negotiations with Brussels on a trade agreement have failed, and a bill has been initiated that violates the Brexit agreement with the European Union. The whole world has realized that the UK can violate the principles of international law and it will be Boris Johnson who is to blame for this. Unfortunately, if the countries of the world understand that London can withdraw from any agreement or violate it at any time, then any diplomatic negotiations with the Kingdom will be held more harshly. Further, some countries will refuse to cooperate with Britain at all. And Boris Johnson will sooner or later leave his post, however, the shadow on the UK may remain for a much longer time. So, from our point of view, former Prime Ministers Theresa May, David Cameron, Gordon Brown, Tony Blair, and John Major are right when they criticize Johnson and his bill. Why was it necessary to sign an agreement with the European Union on the Northern Ireland border at all, if it did not suit London? This is the art of conducting international negotiations in order to reach an agreement with all the parties to the agreement. It was the lack of this skill that cost Theresa May her post. She was unable to negotiate with Brussels in a way that would suit the UK parliament, so she had to go through two votes of no confidence and eventually leave her post. It turns out that Boris Johnson simply deceived everyone and intended to go this way from the very beginning when he simply blocked the work of parliament so that it would not prevent him from immediately implementing a "hard" Brexit. Now it turns out that the Northern Ireland protocol does not suit Johnson and he is going to break it. Well, let's see if the British Prime Minister will really take this step and whether it will cost him his post.

Meanwhile, the same Boris Johnson officially announced that the second "wave" of the "coronavirus" epidemic has begun in the UK. "Now we are facing the second wave. I am afraid that this is absolutely inevitable - we will face this in our country," the Prime Minister said. Johnson also said that there will be no new quarantine because business and the economy are more important than human lives and the health of the nation. "I definitely don't want to introduce large-scale isolation measures, we want to keep schools open. It is fantastic that the work of educational institutions has returned to the previous level. We want to keep the economy as open as possible so that business can grow. The introduction of a nationwide quarantine is the last measure that anyone wants," the Prime Minister said. According to data from Johns Hopkins University, the number of cases in the UK has increased in the last two weeks to 3-4 thousand per day. Recall that the peak of the previous wave was 5-5.5 thousand diseases per day.

As for macroeconomic statistics and various events, there will be few of them in the UK next week. Until Wednesday, traders will have nothing to pay attention to at all. Only on the third trading day of the week in Britain, data on business activity in the services and manufacturing sectors for September will be published. It is expected that the values of all indicators will decrease slightly compared to the previous month, but will remain at a fairly high level. On Thursday, there will be a speech by Bank of England Governor Andrew Bailey, who also did not particularly please market participants last week. And on Friday, only the publication of the report on consumer confidence will take place. So the news calendar for the British pound is very sparse next week.

However, for the British pound at this time, all macroeconomic reports mean even less than for the US dollar. The pound now has two main themes that can easily lower it by another 500-600 points and can return it to the levels of 1.32-1.33. The first is the same ongoing negotiations on a trade agreement with Brussels. The second is Boris Johnson's controversial bill. The first theme is simply the continuation of the main series "Santa Barbara", which began back in 2016. The second topic is a resonant topic of the last few weeks, which is unclear what kind of continuation it will have. On the one hand, the British Parliament has already approved Boris Johnson's bill. On the other hand, the document has been sent for revision, and the very essence of the document does not mean that the agreement with the European Union will be violated without fail. Thus, it may be too early to sound the alarm, but one way or another, the future of the pound will depend on these two topics in the coming weeks.

As has often happened in recent years, the rescue of the British currency may come from the US. 2020 showed that the US currency is not as stable as everyone used to think. The "coronavirus" crisis and epidemic have shown that the American economy is not the pyramids in Egypt, which have stood for several thousand years and will remain unbroken for as long. And against the background of all the economic problems, political ones have also developed. We won't even talk about the elections once again, since this topic has already become a byword. Thus, only a stream of negative news from America can save the pound from further falls. Fortunately for the pound, this option is indeed very likely, since the general situation in the States has not improved much recently. The situation with coronavirus remains very difficult, and the future is uncertain. Thus, it is the pound and the dollar that will fight for the title of the main loser in 2020. The technical picture of the pound/dollar pair so far indicates a very likely resumption of the downward movement. The pair's quotes only managed to enter the Ichimoku cloud, and even then with great difficulty. On Monday or Tuesday, they may return to the area below the critical line, which will contribute to the resumption of the downward trend. 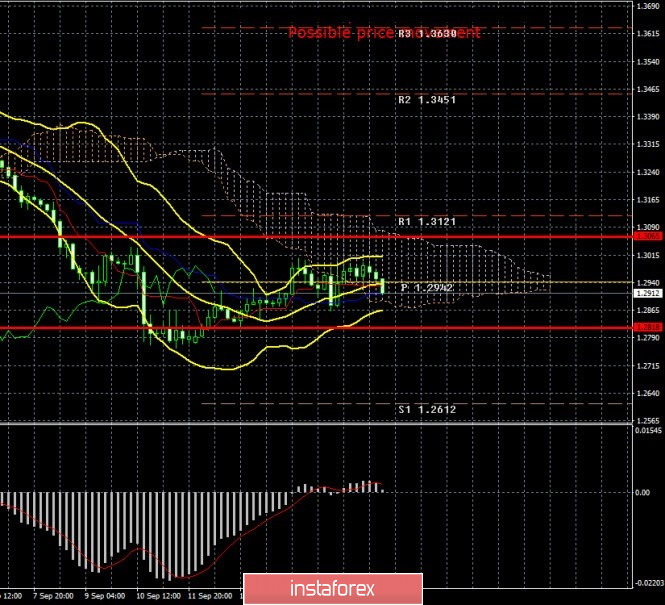 The pound/dollar pair continues to adjust within the downward trend. The pair entered the Ichimoku cloud on the 4-hour timeframe, but could not even reach its upper limit. The further movement of the pound depends entirely on the fundamental background from the UK, and theoretically, it can continue for as long as you want. In the current conditions, we recommend trading lower with targets of 1.2818 and 1.2612 if the pair is fixed below the Kijun-sen line.

Interesting? Write a comment below.
 #GBP/USD. Preview of the new week. In the UK, the second "wave" of the COVID-2019 epidemic began.
Forward 
Backward 