All this led Britain to the first place in Europe in the number of deaths from COVID-2019, and Boris Johnson and his government – to the minimum approval ratings. According to YouGov, which is famous for its statistics and social research, as well as the accuracy of their results, support for the Prime Minister and the government has fallen from 70% to 30% over the past six months. Now the second "wave" of the pandemic has begun. In other words, we can expect a new drop-in British confidence in the government since the number of cases in the country "caught up" with the maximum values of spring. On September 23, 6,187 cases were recorded in the UK, which is the absolute maximum. However, this is only the beginning of the second wave. British tabloids counted about 10 situations when Boris Johnson simply disappeared from view during difficult and crisis moments. Further, this is not our opinion. This is the opinion of British journalists. Thus, Johnson's main trump card remained Brexit, which was still moving towards its logical conclusion.

Johnson was also defeated on this issue. All his attempts to show "strength and stubbornness" did not have any impact on the European Union. Johnson probably thought that if he stood his ground as a statue carved out of stone, Brussels would start to give way. However, Michel Barnier and other top EU officials have repeatedly said that it is London that needs a deal in the first place. In general, the European Union did not make any concessions. Johnson went all-in and submitted a bill that allows violation of agreements with the EU on the Northern Ireland border. His party members immediately approved it (in the second reading and sent it for revision) and no one else in the world or the UK approved this bill except for Johnson's party members. Five former Prime Ministers of the Kingdom criticized any initiatives of Johnson, which may cast a shadow on the reputation of the UK. Also, Johnson does not care what Tony Blair or Theresa May thinks. He has all the power in Britain in his hands, thus, he can do what he wants.

Let us briefly recall the essence of the agreement between London and Brussels on the border on the island of Ireland. The parties agreed at the end of last year that Northern Ireland would effectively remain inside the European single market and comply with EU rules. The customs border between Ireland and Northern Ireland will run in the Irish sea rather than by land, avoiding a hard land border that was impossible to allow due to the Belfast Agreement of 1998, which ended 30 years of the bloody war that involved Ireland, Northern Ireland, and England. Boris Johnson's new bill proposes to cancel certain points of the agreement on Northern Ireland under a fictitious and hastily invented pretext and allow Parliament to make any decisions regarding the regime between Ireland and Northern Ireland. The pretext seems to have been invented within a very short period, as it sounds like this: "To prevent a food blockade by the European Union." In the same way, Johnson can rewrite any agreement with any country. For example, referring to intelligence, Luxembourg is preparing a military invasion of the territory of Great Britain, thus, all contracts are broken with it. It is very convenient, guided by pseudo-national interests, to act in their interests. However, this idea of Johnson is doomed to failure. We have repeatedly asked the question, how is it that 66-million-strong Britain puts forward ultimatums and sets conditions for the European Union, which has the second or third most powerful economy in the world? More than 50% of UK exports go to the European Union. In other words, it is Britain that needs an agreement with the EU, not the other way around. And the British tabloids, meanwhile, even began to write sarcastically that Boris Johnson managed the impossible – to unite five former Prime Ministers at once, who together criticized the "Johnson bill".

From America, Johnson also receives only bad news. First, Donald Trump's compliments to the British Prime Minister have abruptly decreased recently. Second, there has been a sharp decline in the talk of negotiating a trade deal. It is understandable since Trump is preparing for the election and is only busy figuring out how to increase his political ratings. But more calm Democrats have already warned Johnson that breaking the Brexit agreement with the EU will put an end to future negotiations with America. This was stated by both Joe Biden and Nancy Pelosi.

As a result, the final decision on the bill will be made by the Parliament, not the government, and the British media immediately began to ask the question: "Will there be any justification for London if China approves the intention to tear up the British-Hong Kong Declaration at the People's Congress?" It should be recalled that relations with China in Britain also did not work out from the very first day of Johnson at the helm of the country. At first, he and some other top officials of the country said that "now they don't know how to do business with China" (because of the "coronavirus" pandemic). Then Boris Johnson (as many believe, under the patronage of Washington) refused the Chinese company Huawei to develop 5G networks in the UK, although initially this company was entrusted with the development. And then there was the resonant law "on the internal security of Hong Kong", which canceled the autonomy of this city, which is spelled out in the British-Chinese agreement.

The apotheosis of the absurd was the statement of the British government about reaching a trade agreement with Japan, which is estimated at an "unrealistic" 15 billion pounds. This is about 0.1% of GDP. Recall that the membership fee from the EU Treasury from the UK was 70 billion a year. After that, it became known that London removed many of the trade barriers that were in effect against many other countries in the world to encourage exports and imports after Brexit. However, all these actions are still regarded as a trade agreement with Uganda for the supply of two tons of sand.

In general, Boris Johnson and Donald Trump are leading their countries into the abyss. Instead of the mass of declared improvements, both countries are rapidly and confidently moving on a downward path. Trump may lose his post in January. Will British MPs wait for the end of Boris Johnson's Premiership? 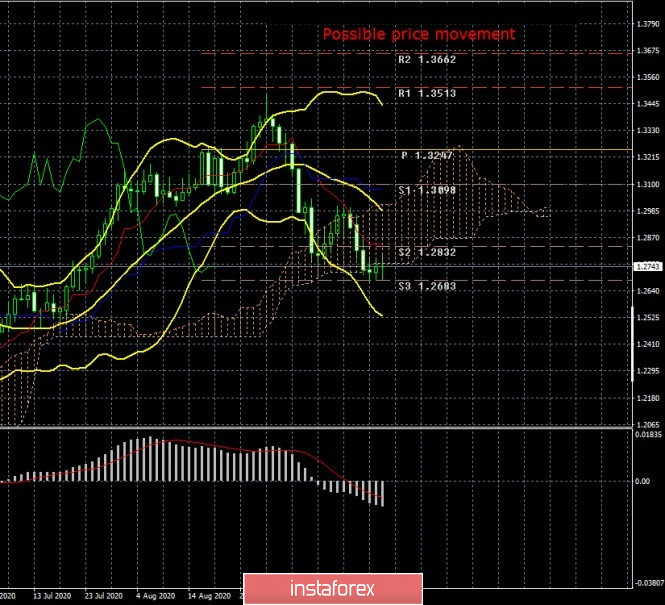 The pound/dollar pair continues its downward movement. In the 24-hour timeframe, traders managed to lower the pair to the area of the Senkou Span B line and even overcome the Ichimoku cloud. However, the further movement of the pound depends entirely on the fundamental background of the UK. Overcoming the support level of 1.2683 will increase the likelihood of further movement to the south. But do not forget that the fundamental background in the United States is also far from the most optimistic. Therefore, the US dollar may again begin to fall in price.