Hot forecast and trading signals for GBP/USD on September 2. COT report. Members of the Bank of England Monetary Committee 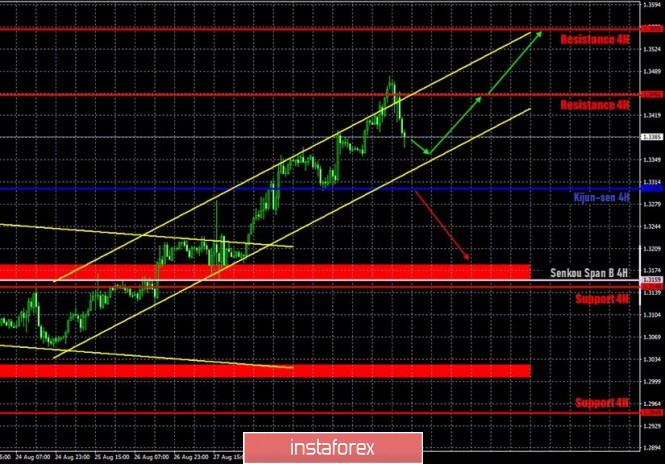 The GBP/USD pair reached this week's first resistance level at 1.3451 on September 1 and then it began a new round of downward correction. Although this round may turn out to be the same as all the previous ones, which is very small. However, now traders have an ascending channel at their disposal, near the lower line of which they can expect to turn up and resume the path to growth. One way or another, there is still an upward trend within this channel. After a whole month of opportunities, the bears have gone back to rest and are not making any attempts to seize the initiative. It seems that the US dollar does not have much to count on as long as the bulls do not start taking profits on long positions again. 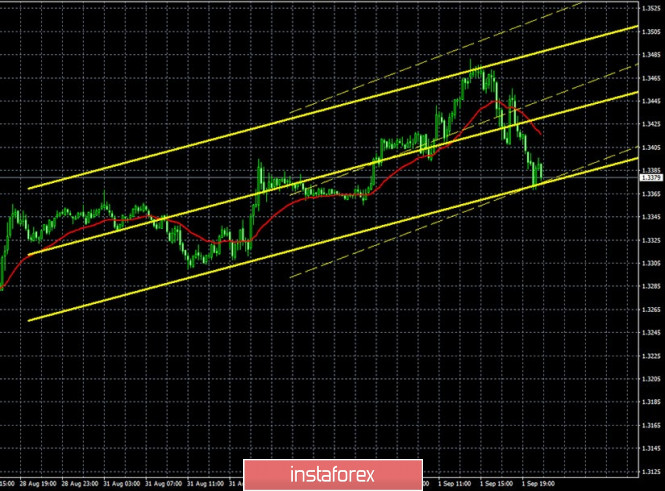 Both linear regression channels are directed upwards on the 15-minute timeframe. The latest Commitments of Traders (COT) report for the British pound, which was released last Friday, was completely neutral. Despite the fact that the UK currency resumed its growth against the dollar and continues to do so at the beginning of the new week, professional traders did not open new Buy-contracts during the reporting week of August 19-25. On the contrary, 9,700 Buy-contracts and 9,100 Sell-contracts were reduced. Thus, the net position for the non-commercial category of traders has slightly fallen. However, this change is so insignificant that it makes no sense to draw conclusions from it. Thus, the general mood of large traders remains the same. The last four trading days were not included in the latest COT report, and the British currency actually became more expensive again on such days. Thus, we can see a serious increase in the net position of non-commercial traders in the new COT report, which, in turn, will confirm the intention of large bulls to continue investing in the pound, while getting rid of the US dollar.

The fundamentals of Tuesday, September 1, boiled down to a few reports from the UK and the US. We have already figured out that the ISM report for the US manufacturing sector supported the dollar in the afternoon. Prior to that, the UK published the PMI for the manufacturing sector, which showed the lowest decrease compared to July - 55.2, so traders did not react to it. This is where the important economic news concerning the pound or dollar ran out. The first place was taken by political, social, epidemiological problems, as well as general economic ones (such as falling yields on US government bonds or the absence of an agreement between Democrats and Republicans on a new package of financial assistance to the US economy). Members of the Bank of England Monetary Committee, Andrew Haldane and Ben Broadbent, are set to speak on Wednesday, September 2. The comments of the BoE board members may give us a peek on future changes in the monetary policy of the British central bank. In particular, everyone is interested in the answer to the question whether negative rates will be introduced in 2020 and whether the quantitative incentive program will be expanded even more. However, just like before, the general background from America will take precedence. We have already found out more than once that traders are not interested in the problems of Britain and the pound.

Based on the above, we have two trading ideas for September 2:

1) Buyers have been active in recent days and are pushing the pair up again. At the moment, the price is still trading within the ascending channel, but the correction has begun. Thus, new long deals can be considered near the lower border of the channel or near the Kijun-sen line, with targets at the resistance levels of 1.3451 and 1.1355. Take Profit in this case will be from 65 to 165 points.

2) Bears have released the initiative from their hands again, thus, it is now recommended to consider short positions again after the price settles below the rising channel and the Kijun-sen line (1.3303) with the target of the support area 1.3156-1.3182. Take Profit in this case will be about 110 points.