Hot forecast and trading signals for EUR/USD on September 18. COT report. Neither bears nor bulls can pull the pair out of 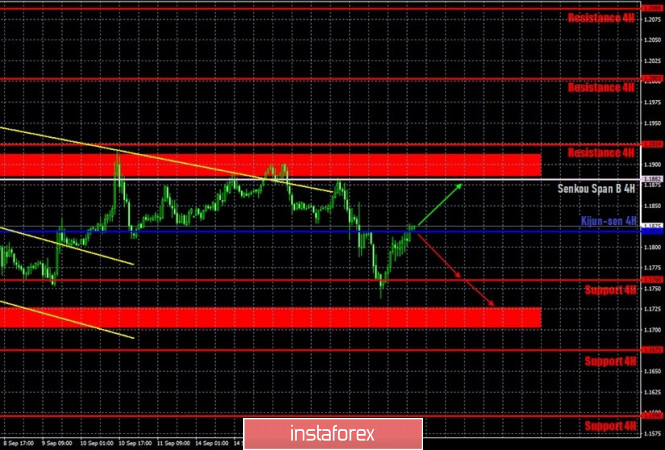 The EUR/USD pair, as part of the downward movement that had begun the day before, reached the support level of 1.1760 on the hourly timeframe on September 17. However, sellers, as usual, failed to overcome this level. "As usual" - because neither bulls nor bears have the necessary strength and desire to, in principle, bring the pair out of the horizontal channel, in which it has been for almost two months. The channel is limited by the levels of 1.17 and 1.19, therefore, rebounding from important levels / support areas / resistance constantly occurs within this channel, especially when not approaching its upper or lower line. At the moment, the pair's quotes have settled above the Kijun-sen line, so it can continue to move up while aiming for the Senkou Span B line. It will be quite difficult for the bulls to overcome this line, since it also borders on the resistance area of 1.1884-1.1910, from which prices only rebound twice in the last few days. 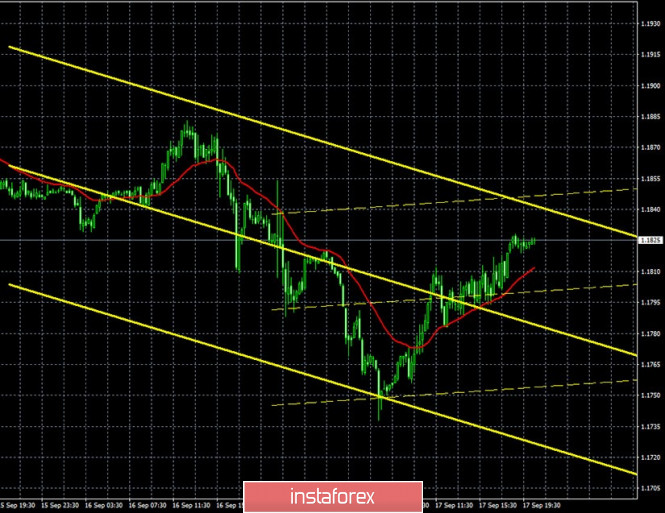 The lower linear regression channel turned up on the 15-minute timeframe, signaling an upward movement on the hourly chart. The latest Commitment of Traders (COT) report, which, recall, comes out with a three-day delay and so it only covers September 2-8, turned out to be absolutely predictable. We expected that the report would not show any fundamental changes in the mood of large traders, because the EUR/USD pair continues to trade in a horizontal channel. At the end of the reporting week, the non-commercial trader category closed 3,073 Buy-contracts (longs) and opened 789 Sell-contracts (shorts). The changes are minimal considering that the total number of contracts for this category exceeds 300,000. Take note that the net position for players in this category has slightly decreased, which means a weakening of the bullish sentiment, but again minimal. The commercial trader category was much more active and closed as many as 30,000 contracts during the reporting week. However, we remind you that the actions of non-commercial traders are more important, since they are considered to be the ones driving the market, and commercial traders usually open positions opposite to them. The last three trading days of last week were not included in the latest COT report, however, no serious price changes were recorded on those days. There are also no major price changes during the current trading week.

The European Union published a report on Thursday, September 17, that deserves attention. The report shows that EU inflation was in the negative area at -0.2% y/y in August. The situation with the so-called core inflation is slightly better, as it reached 0.4% y/y (the indicator does not take into account changes in energy prices and food prices, which tend to change frequently and strongly). However, these are still very low values, which create a headache for the European Central Bank. It is unlikely that this indicator alone should sound the alarm and immediately call for new stimulus from the ECB, but the worse the statistics from the eurozone is, the more likely it is for the euro to fall against the dollar. For example, inflation in the United States was solid, as for the crisis, 1.3% y/y in August.

1) Buyers have not been able to break through several resistances near the upper line of the horizontal channel at $1.17-1.19. Therefore, we recommend considering long positions once the 1.1884-1.1910 area is overcome, afterwards, you can aim for the resistance level of 1.2003. Take Profit in this case will be about 60 points. You can also reject the Senkou Span B line (1.1882), since the price has crossed the Kijun-sen line (1.1819).

2) Bears managed to pull down the pair to the lower area of the 1.17-1.19 horizontal channel, but did not stay there for a long time. The upward movement resumed, and sellers showed their weakness once again, since they could not even reach the 1.1700 level. Now the bears need to wait for the price to settle below the Kijun-sen line (1.1819) in order to open short positions while aiming for the support level at 1.1760. The potential Take Profit in this case is about 45 points.

Interesting? Write a comment below.
 #Hot forecast and trading signals for EUR/USD on September 18. COT report. Neither bears nor bulls can pull the pair out of
Forward 
Backward 