Hot forecast and trading signals for EUR/USD on September 23. COT report. Powell's speech did not stop the dollar from appreciating 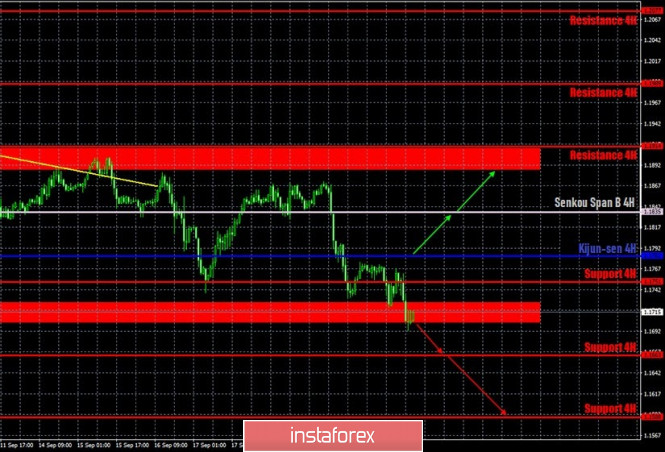 The EUR/USD pair finally fell into the support area of 1.1702-1.1726 on the hourly timeframe on September 22, where it had not been in for a long time. However, this area is the lower border of the $1.17-1.19 horizontal channel, which we have mentioned every day for almost two months now. We say that because the euro/dollar pair spent 90% of these two months within this channel. The quotes continue to trade in flat and even fell during the last two trading days, and this still does not change the overall technical picture. If the bears manage to confidently overcome the 1.1702-1.1726 area, then one can expect quotes to fall towards targets of 1.1663 and 1.1588. Globally, such a downward correction has been brewing a long time ago, since after rising by 1300 points, the pair corrected by only 200, which is very little. 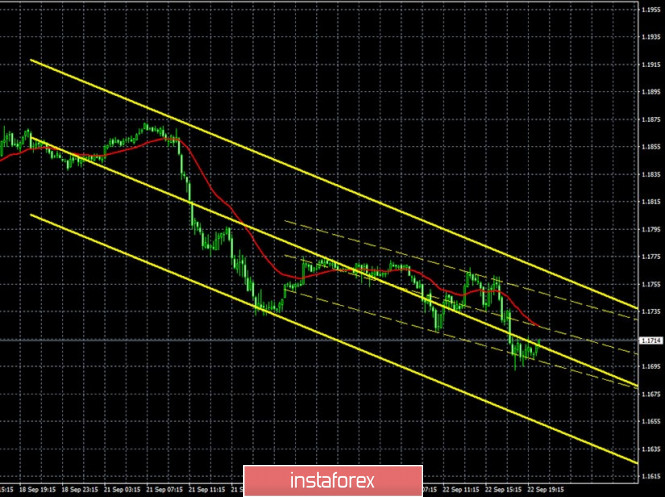 Both linear regression channels are directed to the downside on the 15 minute timeframe, signaling a downward movement. The EUR/USD pair continued to trade in the horizontal channel of 1.17-1.19 last week. Therefore, even if there were changes in the mood of large traders, it did not show on the pair's chart. And there were changes. Non-commercial traders closed as many as 17,000 Buy-contracts (longs) and only 1,500 Sell-contracts (shorts) during the reporting week (September 9-15). Thus, the sentiment of the most important group of traders, "non-commercial", has shifted towards bearish. The net position for this group also decreased by 15,000 contracts. In turn, this means that professional traders began to look towards buying the US dollar and selling the euro. Commercial traders actively closed both types of contracts. However, we are less interested in this group. We still haven't seen results from all these changes. And the nature of the pair's movement hasn't changed much from September 16 to 22. We still failed to get out of the horizontal channel, and falling towards the 1.1700 level is not something extraordinary. Thus, the new COT report, which will be released on Friday, may signal new changes, but there were none on the foreign exchange market during the reporting period.

No important speeches or publications in the European Union on Tuesday, September 22. Federal Reserve Chairman Jerome Powell delivered a speech in the US Congress, but traders were not that impressed, who, in principle, were anticipating the speech. Powell reiterated that economic recovery entirely depends on the success of the fight against the coronavirus epidemic and called on Congress to approve a new package of assistance to all the most affected areas of the economy. Powell is scheduled to make another speech in Congress today, which will most likely repeat yesterday's one with accuracy. Thus, traders can pay more attention to the indexes of business activity in the services and manufacturing sectors of Germany, the European Union and the United States. Changes in these indicators are expected to be minimal, therefore, most likely, market participants will ignore all these reports.

We have two trading ideas for September 23:

1) Buyers released the EUR/USD pair to the lower area of the $1.17-1.19 horizontal channel. Therefore, we recommend considering long positions if the pair remains inside the horizontal channel, and the bulls manage to settle above the Kijun-sen line (1.1782), while aiming for the Senkou Span B line (1.1835) and the resistance area of 1.1894-1.1910... Take Profit in this case will be from 40 to 90 points.

2) Bears pulled down the pair in half to the lower area of the 1.17-1.19 horizontal channel, but now they have to overcome the lower border. If this attempt is successful, we recommend trading down with targets at the support levels of 1.1663 and 1.1588. The potential Take Profit in this case is from 25 to 90 points. Otherwise, the pair will start a new round of upward movement inside the horizontal channel.

Interesting? Write a comment below.
 #Hot forecast and trading signals for EUR/USD on September 23. COT report. Powell's speech did not stop the dollar from appreciating
Forward 
Backward 