Hot forecast and trading signals for GBP/USD on September 29. COT report. Pound surged, but how long will the buyers' fuse 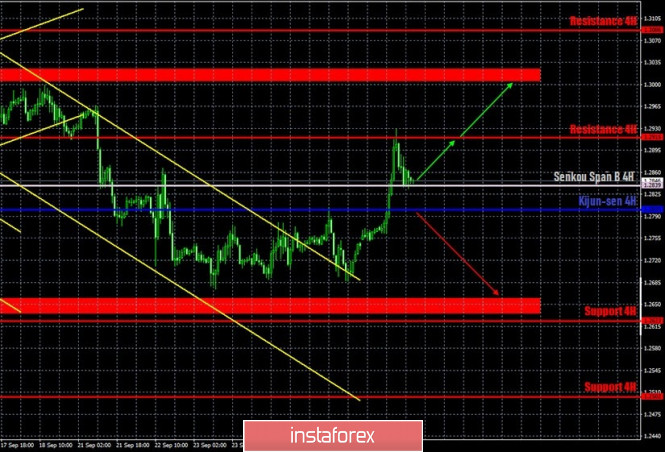 The GBP/USD pair began a stronger round of upward correction on September 28, having managed to overcome both the Kijun-sen line and the Senkou Span B line during the day proved to be correct. Now the upward movement may continue, although a downward correction is highly expected after such a strong growth. One way or another, the bears lost the initiative and now the bulls can take over. The outlook for the British pound looks rather ghostly now, but the US dollar is far from being alright. 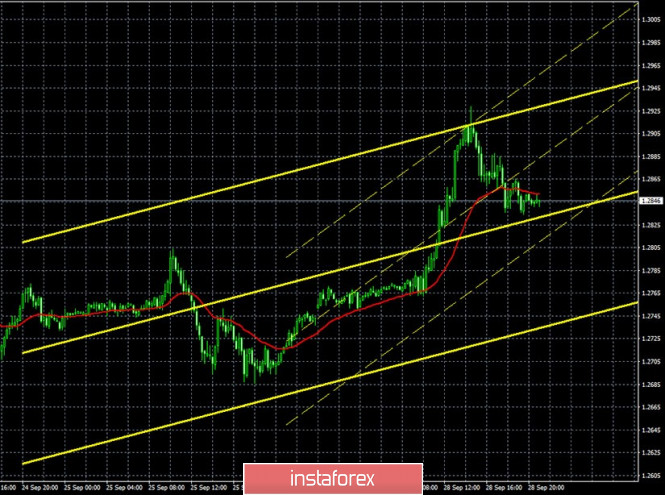 Both linear regression channels turned to the upside on the 15-minute timeframe, responding to the pair's strong growth on Monday.

The latest Commitment of Traders (COT) report for the British pound showed that non-commercial traders got rid of buying the pound and opened Sell-contracts (shorts). A group of commercial traders got rid of huge amounts of both longs and shorts of the pound. We then concluded that the pound sterling is now, in principle, not the most attractive currency for large traders. The new COT report showed absolutely minor changes for the "non-commercial" group. Buy-contracts (longs) fell by 2,000 while Sell-contracts decreased by 1,500. Thus, the net position for non-commercial traders remained practically unchanged for the reporting week (September 16-22). At this time, the British pound continued to fall, which can be considered a consequence of the previous reporting week, when the net position of non-commercial traders greatly decreased, by 11,500 contracts. No changes in the rate of the pound/dollar pair on the 23rd, 24th, 25th, which will be included in the next report. Thus, a long term decline in the pound's quotes is indeed questionable, although the pound is still the most unattractive currency in the foreign exchange market.

No major news, reports or events in the UK on Monday, September 28. Talks at the highest level between Brussels and London regarding the Brexit deal will begin today, but there is little hope of success. The parties have a maximum of a month to conclude it. Otherwise, even if they agree, they will not have time to ratify the agreement. This, of course, is not too much of a problem if the deal does not begin on January 1, but on February 1, for example. However, much more important is the lack of progress in the negotiations. Bank of England Governor Andrew Bailey will deliver another speech today. As always, the market's reaction will depend on what the head of the BoE says. In the past six months, there have been many rumors and conversations around the central bank's introduction of negative rates and the expansion of the QE program. Thus, the more speculations and hints at these steps, the more the pound sterling can potentially fall in price. Today, there will be an election debate between Joe Biden and Donald Trump in the United States. Their results can change the balance of power between opponents five weeks before the elections themselves.

We have two trading ideas for September 29:

1) Buyers continued to push the pair upward and broke through the Kijun-sen and Senkou Span B lines yesterday, and also reached the first resistance level of 1.2915. Thus, you are advised to open new long positions while aiming for the resistance level of 1.2915 and the resistance area of 1.3004 - 1.3024, if a rebound follows from the Senkou Span B line. Take Profit in this case will be from 50 to 150 points. The fundamental background at this time is simultaneously bad for both the pound and the dollar.

2) Sellers failed to keep the pair below the critical line. So now they need to wait for the price to settle below the Kijun-sen line (1.2800), and only after that should they resume trading down while aiming for the support area of 1.2636-1.2660. Take Profit in this case can be up to 110 points.

Interesting? Write a comment below.
 #Hot forecast and trading signals for GBP/USD on September 29. COT report. Pound surged, but how long will the buyers' fuse
Forward 
Backward 