Hot forecast and trading signals for GBP/USD on September 16. COT report. Buyers of the pound taking a rest. Chances of falling 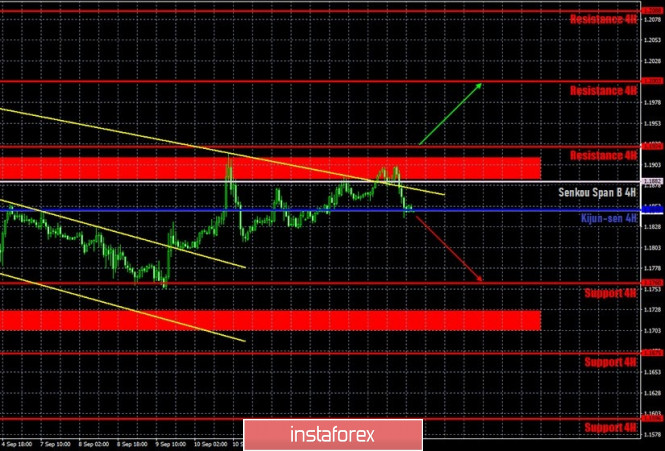 The GBP/USD pair continued to correct after a 700-point fall on September 15, and by the end of the day, it completed the Kijun-sen critical line for the second time in recent days. Thus, sellers received the opportunity to sell the currency pair again, since, firstly, the correction took place (albeit very weak), and secondly, the price rebounded off the Kijun-sen line again. Although the correction is extremely small, nevertheless, the current fundamental background from the UK does not indicate a stronger growth for the British currency. The downward channel remains relevant as the price remains within it. The price can also rebound off its upper line. The bulls continue to rest at this time and wait for the price to settle above the downward channel. 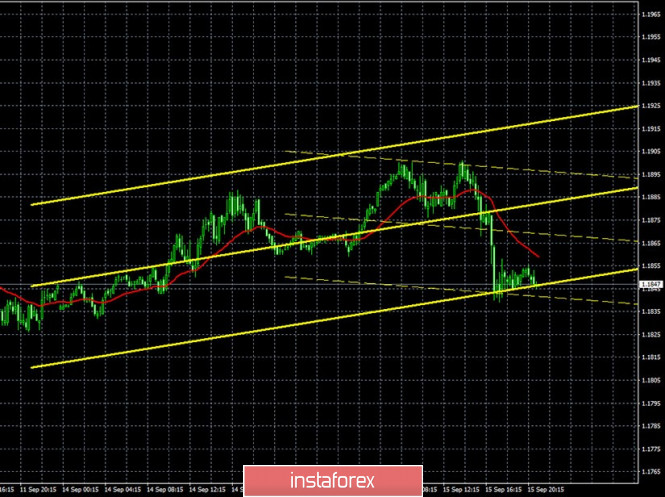 Both linear regression channels are directed upward on the 15-minute timeframe, but we expect it to move down in the near future. The latest Commitments of Traders (COT) report for the British pound was completely unexpected. Despite the fact that the pound only fell and lost 700 points during September 2-8, non-commercial traders (the most important group of traders) closed Sell-contracts (shorts) during this period. It has decreased by 8,000. Buy-contracts (longs) were also closed, but in smaller quantities, down by only 3,500. Thus, according to the logic of things, the pound was supposed to rise in price during this period, since the net position in the "non-commercial" category increased. One might think that other categories of traders have had a greater impact on the pound. However, this is not the case either, since commercial traders opened 14,000 Buy-contracts and 9,000 Sell-contracts in the same period of time. That is, the net position has grown for this category, in other words, traders have become more bullish. Therefore, we have witnessed a paradoxical situation when the report absolutely does not correspond to what is happening on the market. Therefore, the next report may show even more serious changes.

The fundamental background for the pound/dollar pair did not change on Tuesday. The British Parliament passed a decision on the "Johnson Bill", but this did not provoke new sell positions on the pound. Quite important reports were also published in the UK during the day. The unemployment rate rose to 4.1%, as predicted, the number of new applications for unemployment benefits in August reached 73,000, which is slightly lower than forecasts, and the average wage fell by 1% in July, which is also better than analysts' expectations. Thus, the entire package of data can even be regarded as positive. The British currency did not receive much support due to the fact that the unemployment rate rose, and wages fell. Today, traders will focus on the results of the Federal Reserve meeting and Chairman Jerome Powell's speech. However, in addition to this, the UK will publish the consumer price index for August, which may slow down (!!!) to 0% (!!!). If this forecast turns out to be true, then the pair may fall again, as this is a very weak value of inflation.

We have two trading ideas for September 16:

1) Buyers remain outside the market, therefore, it is not recommended to consider new buy positions on the British currency now. It will be possible to open long positions on the basis of the price settling above the downward channel and the Kijun-sen line (1.2896) with the targets on the resistance area of 1.3004-1.3024 and the resistance level of 1.3121. Take Profit in this case will be from 90 to 200 points.

2) Sellers stay in the game and short positions remain relevant. Since the price has not yet managed to gain a foothold above the critical line, it is now recommended to sell the pair again while aiming for the support area of 1.2634 - 1.2660, which is the nearest. Take Profit in this case can be around 180 points. For safety, we recommend placing a Stop Loss order. The pair may resume falling today once the inflation report in Britain has been released, however, there may be a strong unpredictable movement during the day, as the results of the Fed meeting will be published in the evening.