Hot forecast and trading signals for EUR/USD on September 29. COT report. Bulls have good prospects based on foundation and 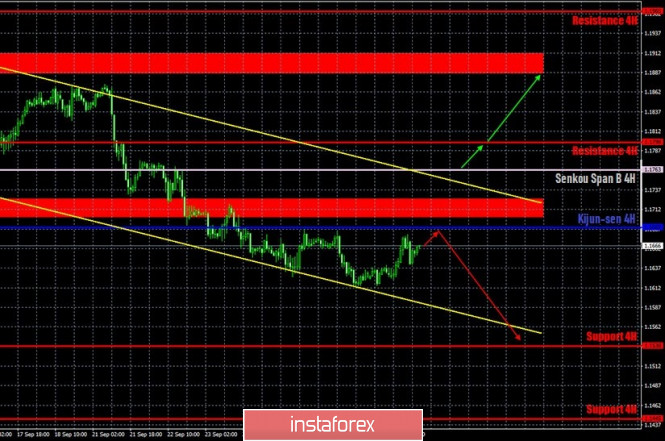 The euro/dollar pair began to correct and went to the critical Kijun-sen line, while remaining inside the descending channel on the hourly timeframe on September 28. Thus, the general trend for the pair has not changed; short positions are still relevant. If the pair remains below the Kijun-sen line or, after completing the correction, settles below this line, then movement to the downside is likely to resume. Buyers' prospects look very vague so far, as they have to overcome not only the Kijun-sen line, but also the resistance area of 1.1704-1.1728, the Senkou Span B line and the upper line of the descending channel. However, since the prospects for the US dollar remain even more obscure, this option has a not so low likelihood of execution. 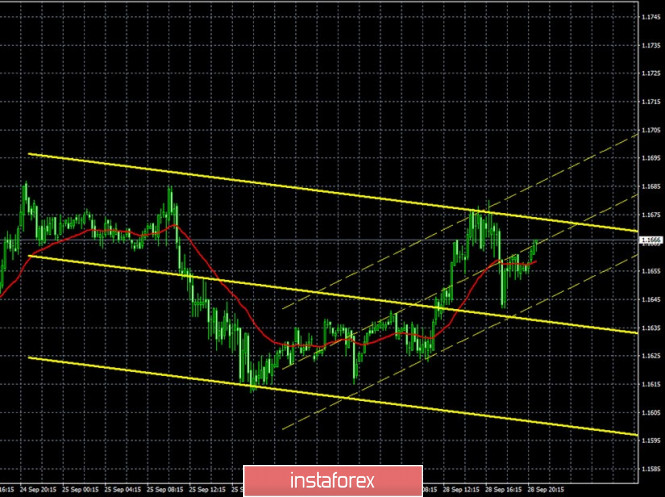 The lower linear regression channel turned to the upside on the 15-minute timeframe, also indicating the beginning of a correctional movement. The euro/dollar fell by about one and a half cents last reporting week (September 16-22). Recall that the previous Commitment of Traders (COT) report showed that the "non-commercial" group of traders, which we have repeatedly called the most important, sharply reduced their net positions. Thus, in general, the downward movement that began later on was sufficiently substantiated. The only problem is that it started late. The new COT report, which only covers the dates when the euro began its long-awaited fall, showed completely opposite data. Non-commercial traders opened 15,500 new Buy-contracts (longs) and almost 6,000 Sell-contracts (shorts) during the reporting week. Thus, the net position for this group of traders has increased by around 9,000, which shows that traders are becoming bullish. Accordingly, the behavior of the EUR/USD pair and the COT report data simply do not match. For the second week in a row. However, if you try to look at the overall picture, you can still note a very weak strengthening of the bearish sentiment, so the COT report allows a slight fall in the euro. The question is whether it will continue to decline at all, since we have already seen a "weak fall" from the September highs. It is possible that the strengthening of the bullish sentiment will make it possible for the pair to resume growth.

No important macroeconomic publications in the European Union and the United States on Monday. Nevertheless, the dollar simultaneously began to depreciate against the dollar and the euro from the very morning of the previous day. Thus, it is possible that professional traders started the new week by reducing dollar positions, which caused the dollar to weaken itself. Only minor reports from the EU are scheduled on the second trading day of the week, such as the level of consumer confidence or the index of economic sentiment. Market participants will ignore them. FOMC representatives Clarida, Quarles, Williams will deliver a speech in the United States. Speeches by Federal Reserve members happen often enough, but they rarely contain important information. Last week, even Fed Chairman Jerome Powell never managed to surprise the markets, although he had three attempts to do so. Thus, the fundamental background is likely to be weak today. However, it is quite possible that traders do not need help from the "foundation" now.

We have two trading ideas for September 29:

2) Bears are in control. But the same COT report warns that the dollar's rise may be very short-lived. Nevertheless, as long as the price is below the Kijun-sen line, you are advised to continue trading down with the target at the support level of 1.1538. In this case, the potential Take Profit is up to 110 points.

Interesting? Write a comment below.
 #Hot forecast and trading signals for EUR/USD on September 29. COT report. Bulls have good prospects based on foundation and
Forward 
Backward 