Hot forecast and trading signals for EUR/USD on September 30. COT report. Dollar needs support, but it will be very difficult 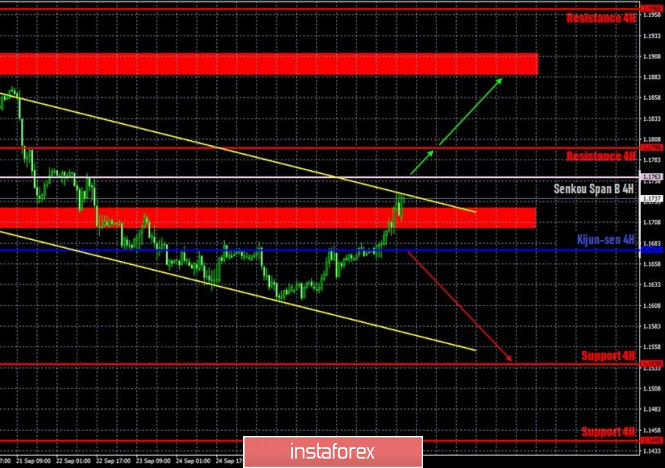 The EUR/USD pair continued to correct throughout the day on the hourly timeframe on September 29. And by the end of the day, it reached the upper line of the descending channel, which still continues to maintain a downward trend. Buyers have taken a major step towards the reversal of the downward trend, but they still need to overcome the channel itself, as well as the Senkou Span B line located very close to it, which is also a strong obstacle. At the same time, the bears retain good chances of renewing their downward movement. To do this, they just need to keep the pair inside the downward channel. Take note that the growth was not that strong for the last couple of days, only about 120 points. For greater confidence in bringing back the downward track, we advise you to wait until it settles below the critical line. 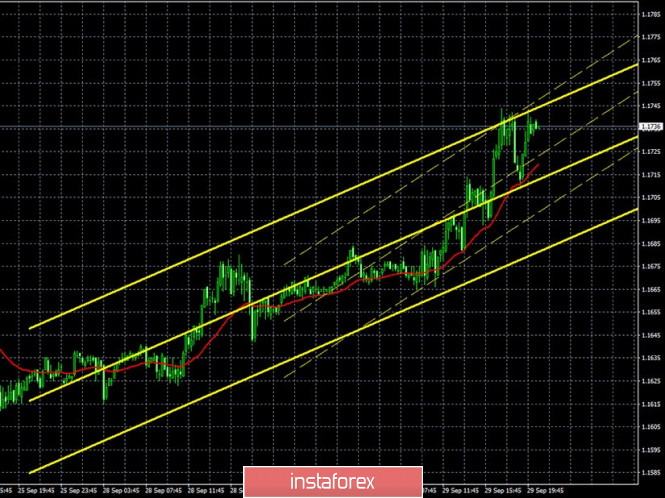 Both linear regression channels turned to the upside on the 15-minute timeframe, which indicates that the upward movement will continue. The euro/dollar fell by about one and a half cents last reporting week (September 16-22). Recall that the previous Commitment of Traders (COT) report showed that the "non-commercial" group of traders, which we have repeatedly called the most important, sharply reduced their net positions. Thus, in general, the downward movement that began later on was sufficiently substantiated. The only problem is that it started late. The new COT report, which only covers the dates when the euro began its long-awaited fall, showed completely opposite data. Non-commercial traders opened 15,500 new Buy-contracts (longs) and almost 6,000 Sell-contracts (shorts) during the reporting week. Thus, the net position for this group of traders has increased by around 9,000, which shows that traders are becoming bullish. Accordingly, the behavior of the EUR/USD pair and the COT report data simply do not match. For the second week in a row. However, if you try to look at the overall picture, you can still take note of a very weak strengthening of the bearish sentiment, so the COT report allows a slight fall in the euro. The question is, will it continue to decline or is it already over? The pair even managed to rise by 40 points from September 23-29. Therefore, there are no such changes again.

Practically no important messages and events in the European Union and the United States on Tuesday. Markets seem to be fully focused on the current debate between Donald Trump and Joe Biden, the results of which will be announced later in the morning. Although this topic is not economic, nevertheless, everything in the United States now passes through the prism of elections. The US is set to release an important report today. The ADP report on changes in the number of employed in the private sector with a forecast of +648,000. If results turn out to be better than forecasts, then we can expect the dollar to strengthen. In all other respects, the US dollar can hardly count on support tomorrow. Personal consumption spending indices are forecast in negative territory, the third estimate of US GDP for the second quarter is unlikely to be better than the second...

We have two trading ideas for September 30:

1) Buyers continue to put pressure on the pair, but these efforts are still not enough to break the current trend. Therefore, we recommend considering long positions if the pair settles above the descending channel with the Senkou Span B line (1.1763) with targets at 1.1798 and the resistance area of 1.1886-1.1910, not earlier. Take Profit in this case will be from 20 to 110 points.

2) Bears try to keep it under control despite the fact that the euro has been growing for three whole days. Still, the latest COT report warns that the dollar's gains could be very short-lived. There is a possibility that the downward movement will resume as long as the price is within the channel. You are recommended to trade bearish below the Kijun-sen line, while aiming for the support level of 1.1538. In this case, the potential Take Profit is up to 110 points.

Interesting? Write a comment below.
 #Hot forecast and trading signals for EUR/USD on September 30. COT report. Dollar needs support, but it will be very difficult
Forward 
Backward 