Hot forecast and trading signals for GBP/USD on September 21. COT report. Disappointing news from the UK 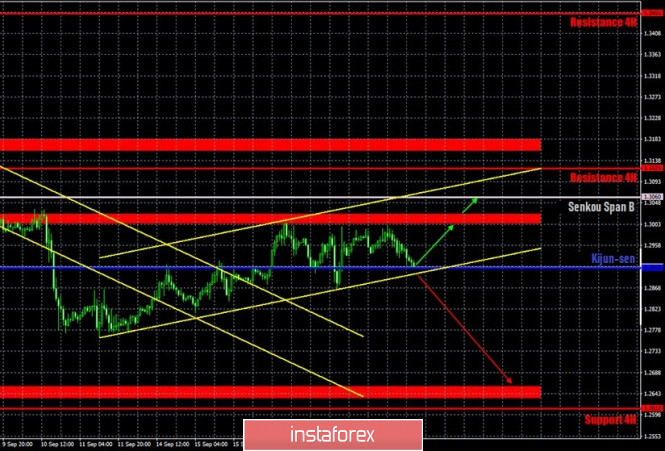 The GBP/USD pair traded with a downward bias again on Friday, September 18, and by the end of the day it reached the critical Kijun-sen line, and also came close to the lower line of the rising channel. Thus, market participants show that they are going to return to selling the pound. This is also evidenced by the price rebounding from the resistance area of 1.3005-1.3025 and several downward reversals near it. So now the bears only have to overcome the rising channel and the pound can go into a new prolonged fall. The bullish prospects will remain if a rebound occurs from the Kijun-sen line. Then the pair may try to return to the 1.3005-1.3025 area again.

The lower channel turned to the downside on the 15-minute timeframe, a downward movement is possible due to several failures in the 1.3005-1.3025 area. The new Commitments of Traders (COT) report for the pound, which came out last Friday, was very, very expressive. The previous report showed that professional traders became more bullish despite the fact that the British currency fell 700 points in price. The new COT report turned out to be much more logical. Non-commercial traders closed 4,500 Buy-contracts (longs) and opened 7,000 Sell-contracts (shorts) during September 9-15. Thus, the net position for the "non-commercial" category of traders decreased by 11,500 contracts at once. This is very significant, since this group holds a total number of 81,000 contracts. Therefore, this time the data of the COT report coincides with the nature of trading in the foreign exchange market. The behavior of commercial traders was even more interesting, as they closed 37,000 Buy-contracts and 45,000 Sell-contracts in just a week. This suggests that many large players are currently not interested in the pound as an investment currency. The future of the UK and its economy is so uncertain that traders are not interested in buying or selling. Commercial traders are hedgers and, judging by the COT report, they simply switch to other currencies rather than use the pound in their accounts. The COT report at this time will not provide much help in predicting the pair's succeeding movement, since almost everything depends on the fundamental background at the moment.

Fundamental background for the GBP/USD pair was neutral on Friday. However, this is only on Friday. Prime Minister Boris Johnson said that the second wave of the epidemic has begun in the country, which means that a deterioration in economic sentiment and business activity can be expected in the near future. Johnson assured that the government is not going to introduce tough quarantine measures in the country, however, no matter how pathetic it sounds, it is not up to him to decide. If the pandemic gains momentum and exceeds the incidence rate of the first wave, when the healthcare system was barely able to cope with the influx of patients, then like it or not, a new lockdown or "hard" quarantine will have to be introduced. In addition, the country still has problems in the form of a lack of a trade deal with the European Union, as well as a possible conflict with the EU on the basis of Johnson's new bill on the UK internal market. Any news on these three topics could potentially trigger another fall for the pound.

2) Sellers only need to leave the rising channel and it will open up amazing prospects. If the price settles below the critical line (1.2910) and below the rising channel, we recommend selling the British currency while aiming for 1.2661. The target is distant and may take several days to reach it. Take Profit in this case can be about 200 points.