Hot forecast and trading signals for GBP/USD on September 11. COT report. Pound lost another 200 points due to Boris Johnson's The GBP/USD pair, in contrast to EUR/USD, continued to sharply fall on September 10. In principle, you can clearly see that the downward trend is going to extend, and the price has managed to go far below the downward channel. Yesterday, the pair failed to settle above the resistance area of 1.3004-1.3024 within the minimum upward correction, afterwards, it rebounded and collapsed again. Therefore, a clear signal for new sell positions appeared. At the moment, the quotes have reached the final, third support level for this week at 1.2833 and may begin to correct. Although everything depends on the fundamental background from the UK, which market participants ignored for a long time, and on the mood of the bears. 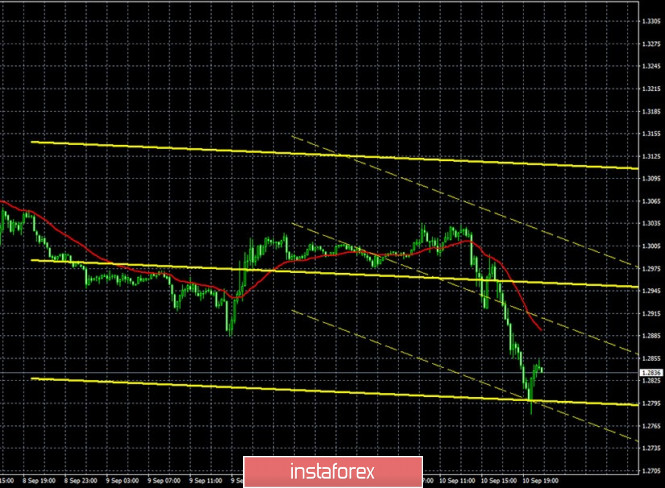 Both linear regression channels are directed downward on the 15-minute frame, thus, we can conclude that the downtrend will continue. The latest Commitments of Traders (COT) report on the British pound was more unexpected than the euro currency report. If non-commercial traders were already shorting the euro, the same category of traders continued to place longs. In total, professional traders opened 5,500 new Buy-contracts (longs) and 3,000 new Sell-contracts (shorts) during the reporting week (August 26 - September 1), thus, their net position even increased by 2,500, according to the new COT report. In principle, such data perfectly describes what is happening in the foreign exchange market, since the pound grew during all five trading days included in the report. The pound has been depreciating from September 1 to this day, but there is no hint that professional traders have stopped buying the pound in the latest COT report. But the new COT report, which will be released today, may show a sharp decrease in the net position for the non-commercial category.

The fundamental background does not raise any questions at this time. No macroeconomic data published in either the UK or America. However, in any case, some traders consider data as irrelevant right now as they massively sell the British pound due to the actions of the British government and the complete uncertainty of the future. The last week and a half have become "black" for the pound and it can only thank British Prime Minister Boris Johnson for this, who continues to pretend to be US President Donald Trump or the ruler of earth and believes that the European Union should conclude such a trade deal as he wants. And if not, Johnson will bluff, blackmail and show his readiness to violate the principles of international law. London's actions are condemned not only by the EU, but also by the US and the countries that are part of the United Kingdom - Wales, Scotland and Northern Ireland. As for the uncertainty, there was plenty of it even before the events of September, and after them it is generally not clear what the British economy should expect in 2020-2021. It is entirely possible that Washington will refuse to discuss the trade deal at all, and Brussels will impose sanctions against Great Britain. Such is the price of Boris Johnson's actions, who, apart from Brexit, has nothing to boast of at the helm of a once great power.

We have two trading ideas for September 11:

1) Buyers are still out of the market, bears are now ruling the show. Thus, you are recommended to consider buying the pound when the price settles above the downward channel and aim for 1.3139 and the Senkou Span B line (1.3298). Take Profit in this case will be from 60 to 220 points.

2) Sellers continue to pull down the pair, so short positions remain relevant. However, all of this week's targets have already been overcome, so setting the quotes below the 1.2833 level will allow you to trade short without targets or at the personal discretion of traders. Take Profit in this case can be almost anything. However, for safety in this case, we recommend placing a Stop Loss order.