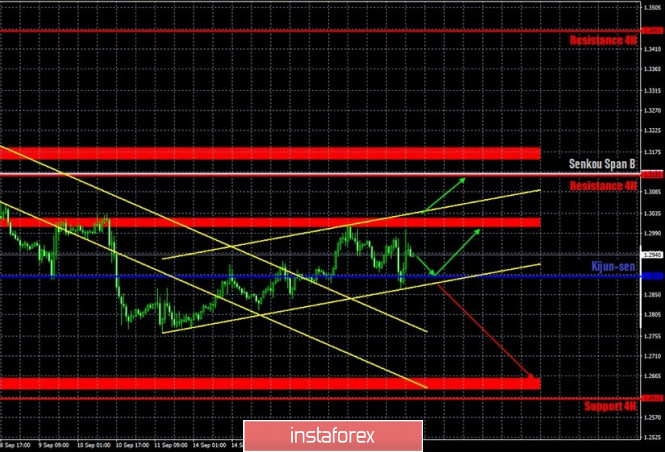 The GBP/USD currency pair traded even more sluggish than the EUR/USD pair on September 17. A rising channel with a minimum slope appeared, which, in fact, reflects a corrective movement after the pair fell by 700 points. The pound/dollar pair fell to the critical Kijun-sen line, rebounded from it and resumed an indistinct rising movement. Also, over the past two days, buyers could not overcome the resistance area of 1.3004-1.3024. Thus, the prospects for strengthening the British currency even more are also in doubt. Therefore, bulls need to overcome the 1.3004-1.3024 area in order to expect anything more than 200 points of correction. The bears need to urgently regain the initiative by setting the price below the rising channel. 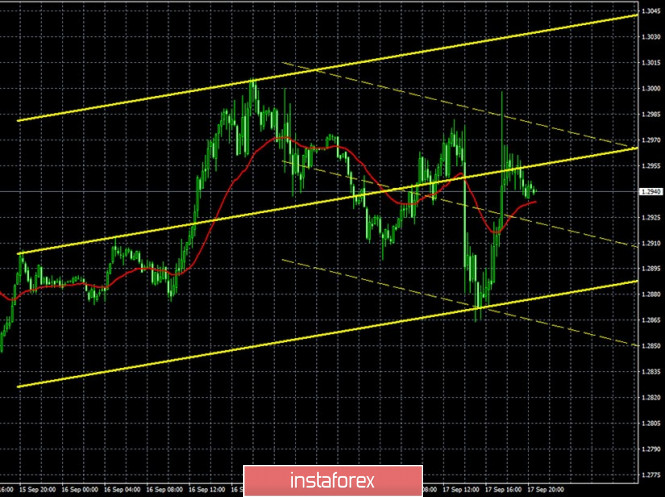 The lower channel turned down on the 15-minute timeframe, a downward movement is possiblel due to the price rebound from the 1.3004-1.3024 area. The latest Commitments of Traders (COT) report for the British pound was completely unexpected. Non-commercial traders (the most important group of traders) closed Sell-contracts (shorts) during September 2-8, despite the fact that the pound only lost 700 points during this period. Sell-contracts decreased by 8,000. Buy-contracts (longs) were also closed, but in smaller quantities, down by only 3,500. Thus, according to the logic of things, the pound should have increased in price during this period, since the net position in the "non-commercial" category increased. One might think that other categories of traders have had a greater impact on the pound. However, this is not the case either, since commercial traders opened 14,000 Buy-contracts and 9,000 Sell-contracts in the same period of time. That is, the net position for this category of traders has grown, in other words, traders have become more bullish. Therefore, we have witnessed a paradoxical situation when the report absolutely does not correspond to what is happening on the market. The next report, therefore, may show even more serious changes.

The fundamental background for the GBP/USD pair was absolutely neutral on Thursday. There was no news on the conflict situation between Brussels and London. The Bank of England disappointed market participants instead of making them happy. The central bank allowed the introduction of negative rates in the future and noted high risks for the economy due to the new wave of the pandemic and also because of the high probability of the UK leaving the EU without a trade deal. Traders also believe that the BoE will have to expand its quantitative stimulus program from its current £745bn during 2020. No major macroeconomic events and publications in the UK and the United States are scheduled on the last trading day of the week. Thus, most likely, we can expect calm trading in a weak rising channel.

1) Buyers are slowly becoming active, but they failed to overcome the 1.3004-1.3024 area twice, so moving up in the long term is in doubt. You can open new long positions after breaking through this area and aim for the resistance level of 1.3121. Take Profit in this case will be about 80 points.

2) Sellers temporarily let go of the initiative, but not overcoming the 1.3004-1.3024 area gives them hope for returning the downward trend. Thus, in case the price settles below the critical line (1.2891) and the rising channel, we recommend trading down again while aiming for 1.2661. The target is distant and may take several days to reach it. Take Profit in this case can be about 200 points.