Hot forecast and trading signals for GBP/USD on September 23. COT report. Andrew Bailey failed to affect the markets with 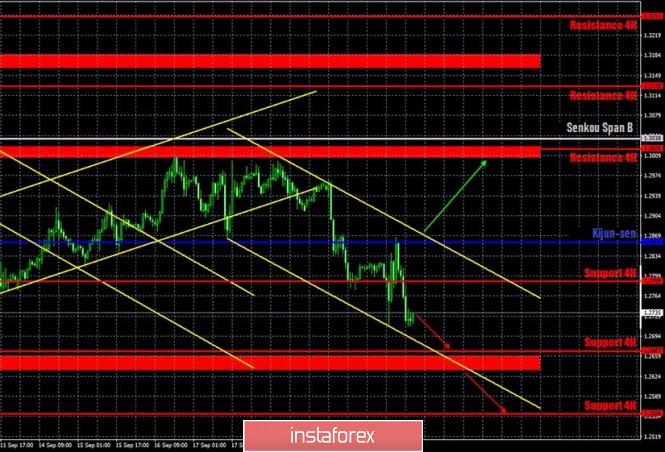 The GBP/USD pair continued to trade with a downward bias on September 22. A new descending channel appeared, within which trading is taking place at this time. Thus, after pausing for about a week, bears began to put pressure on the pound/dollar pair again. We saw an expressive rebound from the Kijun-sen line yesterday, which increases the likelihood of the pair's decline. The bulls have completely released the initiative from their hands, due to the UK's fundamental background. But more on that below. Traders will only get a chance of a small upward movement if they manage to gain a foothold above the descending channel. 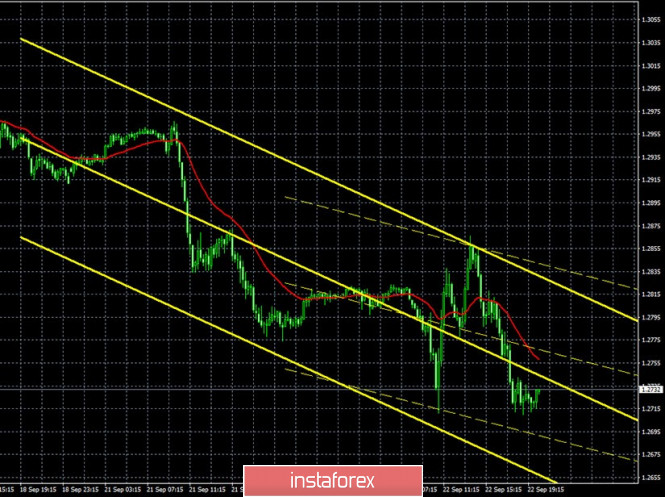 Both linear regression channels are directed downward on the 15-minute timeframe, which fully corresponds to the pair's current trend. The new Commitments of Traders (COT) report for the British pound, which came out last Friday, was very expressive. The previous report shows that professional traders became more bullish despite the fact that the British currency fell 700 points in price. The new COT report turned out to be much more logical. Non-commercial traders closed 4,500 Buy-contracts (longs) and opened 7,000 Sell-contracts (shorts) from September 9 to 15. Thus, the net position for the "non-commercial" category of traders decreased by 11,500 contracts at once. This is very significant, since this group has 81,000 contracts. Therefore, this time the data of the COT report coincides with the nature of trading in the foreign exchange market. Commercial traders were even more interesting, as they closed 37,000 Buy-contracts and 45,000 Sell-contracts in just a week. This suggests that many large players are currently not interested in the pound as an investment currency. The future of the UK and its economy is so uncertain that traders are not interested in buying or selling. Commercial traders are hedgers and, judging by the COT report, they simply switch to other currencies rather than use the pound in their accounts. The new COT report, to be released this Friday, may show minor changes, however, the sentiment of non-commercial traders is likely to become even more bearish.

The fundamental background for the pound/dollar pair was fairly neutral on Tuesday, despite the speeches of Federal Reserve Chairman Jerome Powell and Bank of England Governor Andrew Bailey. The speeches were interesting, but they didn't really influence the general trend. Bailey tried to convince the markets that the British central bank is not going to apply negative rates in the near future, but this still did not save the pound sterling from new short positions. On Wednesday, traders are advised to pay attention to the indices of business activity in the services and manufacturing sectors in the UK, as traders traditionally react to these reports more readily than to European or American ones. However, no major changes are expected in these figures. Therefore, if there are no surprises, then it is unlikely that traders will work out these numbers.

We have two trading ideas for September 23:

1) Buyers have let go of the initiative and now they have to work hard enough to get it back. We can talk about long positions on the British currency, but first the price should settle above the descending channel with the first target at the resistance level of 1.3020. However, given the fundamental background and the general mood of market participants, it is unlikely for the trend to change to an upward one in the near future. Take Profit in this case will be about 120 points.

2) On the other hand, sellers can only trade down at this time. The nearest targets are support levels 1.2667 and 1.2558. It is best to sell the pair from the upper area of the descending channel, however, to do this, the quotes should rise in that area. Price rebounds from the Kijun-sen line (1.2857) or the upper channel line can be used to open new positions. Take Profit in this case can range from 50 to 170 points.