Hot forecast and trading signals for EUR/USD on September 7. COT report. Major players started to close long trades in the 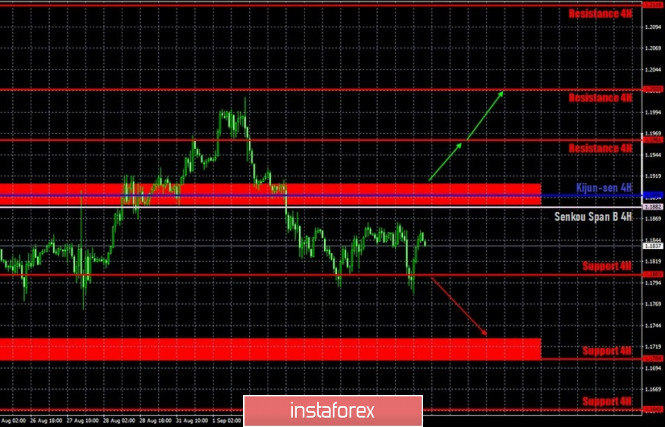 The hourly timeframe on September 4 showed that the euro/dollar pair reached the support level of 1.1803 for the second time, unsuccessfully trying to overcome it as it did the first time, and then it began to retreat to the upside by the end of the trading day. Thus, last Friday's trading was already in a very narrow sideways range even without an intraday trend. The overall technical picture remains as vague and incomprehensible as it did in the last month and a half. On the one hand, we can say that the pair continues to be flat despite the fact that quotes have gone above the upper limit of the side channel twice at 1.17-1.19. At the same time, the pair spends most of its time within the specified range. And since this range is only 200 points, the pair is now moving flat. Therefore, we suggest that you continue to rely on the flat when making any trading decisions. 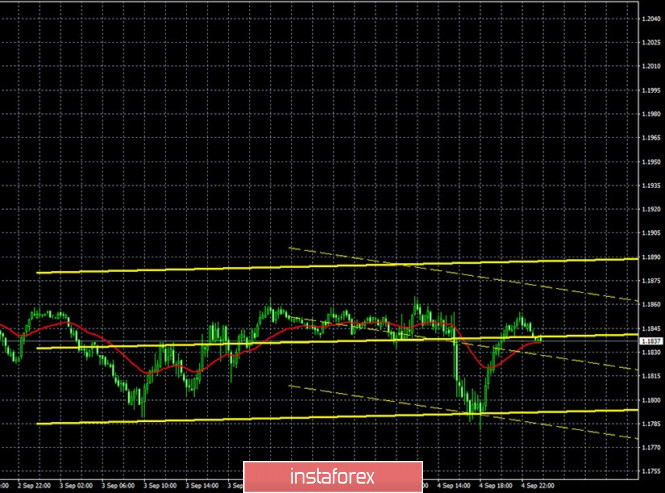 The 15-minute timeframe shows that the higher linear regression channel is the best way to show that even in the short term, the pair is moving inside the sideways channel. The latest Commitment of Traders (COT) report, which, let me remind you, comes out with a three-day delay and only covers the dates from August 26 to September 1, unexpectedly showed a decrease in the net position for the "non-commercial" category of traders. Let me remind you that non-commercial traders are the most important category of traders who enter the foreign exchange market in order to make a profit. So, non-commercial traders reduced Buy positions and opened Sell contracts during the reporting week. The number of Buy positions decreased by almost 11,000, while the number of Sell positions increased by 3,000. Thus, the net position immediately decreased by 14,000. Take note that the euro did not really get cheaper during the reporting week, which is covered by the latest COT report. The euro strengthened during all five trading days, and only started falling on September 1, which we can now describe as being provoked by professional traders and their sell positions. The euro was falling after September 1, so the new COT report may signal an even greater decrease in net positions. And in this case, it will confirm that the mood of non-commercial traders is really changing to a downward one.

Three important reports were published in America on September 4, Friday, which could have an impact on the euro/dollar pair's movement. They could have, but in the end they practically did not. Looking ahead, the US dollar initially rose in price by 60 points when these data were released, and then it fell by the same amount. In fact, markets did not react. Or it could be called highly mediated or indirect. Nevertheless, there was enough positive news from America. The unemployment rate fell by the end of August to 8.4%, while a broader measure of unemployment known as the U6 suggests the "real" rate was 14.2%, and the average hourly wages rose by 0.4%, although analysts had predicted zero growth. Therefore, the US dollar had an excellent opportunity to continue growing, but failed to do so again. Even the Nonfarm Payrolls report could not prevent this.

1) Bulls continue to keep their finger on the pulse of the market and feel ready to return at any time to start new buy positions for the euro. At least the current drop in quotes is very weak, and the price has not yet approached the important level of 1.1700, which we still consider as the lower border of the side channel. You can buy the pair in small volumes in case it settles above the Kijun-sen line with targets at 1.1961 and 1.2020. Take Profit in this case will be from 35 to 100 points.

2) Bears got the opportunity to start forming a new downward trend, as they managed to gain a foothold below the Senkou Span B line (1.1882), but so far they clearly do not want to use it. Thus, for now, we can recommend selling the pair while aiming for the support area of 1.1705-1.1729, if there is a consolidation below the 1.1803 level. In this case, the potential Take Profit is 50-60 points.