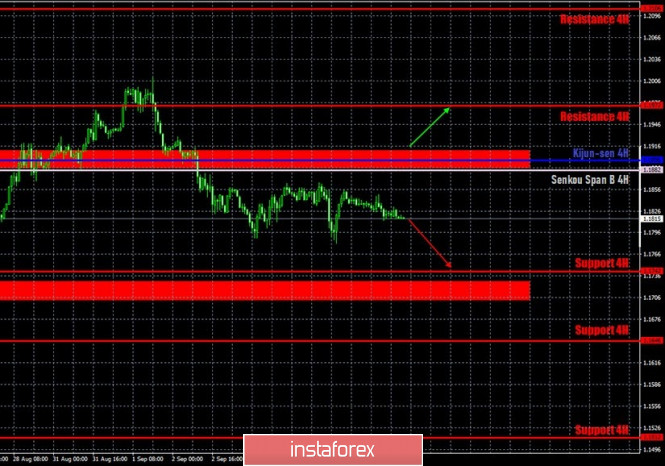 The EUR/USD pair was nearly moving from side to side on the hourly timeframe on September 7. We even defined the narrow side channel in articles for beginners, only 75 points wide. Trading took place in this channel throughout Monday. In addition, the price is still in a wider side channel, between the levels of 1.17 and 1.19. It has been trading in this range for over a month. Thus, the upward trend is maintained, since the price does not go far from its two-year highs and, accordingly, the bulls can become active at any moment and start attacking the US dollar again. Also, formally, there is not one but two flats that are now taking place, although the "higher flat" is more clearly visible on timeframes above 1H. The pair is located below the Kijun-sen and Senkou Span B lines, which makes it possible to trade down. But now the pair has problems with overcoming the 1.1780 level. 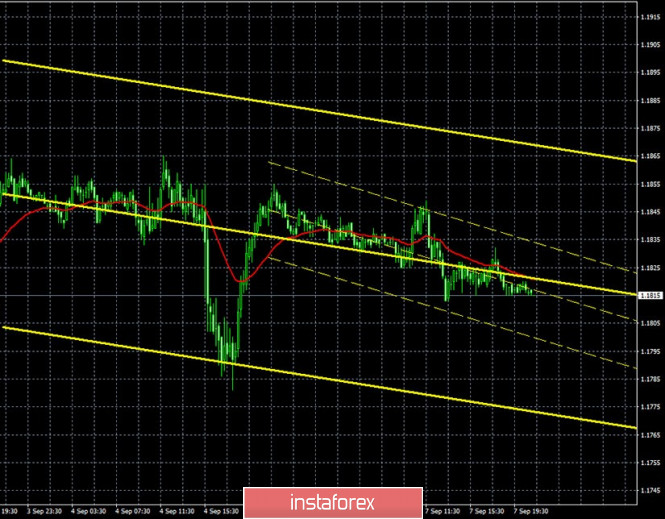 According to the 15 minute timeframe, both linear regression channels show that the pair is moving within the side channel even in the shortest term. The latest Commitment of Traders (COT) report, which, let me remind you, comes out with a three-day delay and so it only covers the dates from August 26 to September 1, rather unexpectedly showed a decrease in the net position for the "non-commercial" category of traders. Let me remind you that non-commercial traders are the most important category of traders who enter the foreign exchange market in order to make a profit. Non-commercial traders reduced Buy positions and opened Sell-contracts during the reporting week. The number of purchases decreased by almost 11,000, while the number of sales increased by 3,000. Thus, the net position immediately decreased by 14,000. We would like to take note that the euro did not really get cheaper during the reporting week, which is covered by the latest COT report. The euro strengthened during all five trading days, and then it only began to fall on September 1, which we can now describe as being provoked by professional traders and their sell positions. The euro fell after September 1, so the new COT report may signal an even greater decline in net positions. And in this case, it will confirm that the mood of non-commercial traders is changing to a downward one.

Both America and the European Union did not release any significant macroeconomic report on Monday, September 7. In addition, there was no fundamentally important news from the EU. The European Central Bank will hold its meeting this week, during which the market could receive some really important information. Especially in light of the ECB Chief Economist Philip Lane's recent statements that the current euro exchange rate has an adverse effect on the EU economy. On Tuesday, we can expect the EU to release the GDP for the second quarter in the second estimate. It will be difficult for the euro currency to count on growth if the value of the first estimate is not revised for the better. German industrial production was also released yesterday, showing a 10% year-on-year decline in July, although traders were expecting a 12.1% gain. In monthly terms, the growth was only 1.2% instead of the forecasted +4.8%.

We have two trading ideas for September 8:

1) Bulls continue to keep their finger on the pulse of the market and are ready to return to the market at any time and open new buy positions. At least the current drop in quotes is very weak, and the price has not yet managed to even approach the important level of 1.1700, which we consider as the lower border of the side channel. Small volumes can be bought in the case the quote settles above the Kijun-sen line (1.1896) with the target of 1.1972. Take Profit in this case will be about 45 points.

2) Bears got the opportunity to start forming a new downward trend, as they managed to gain a foothold below the Senkou Span B line (1.1882), but so far they clearly do not want to use it to the fullest. Thus, for now we can recommend selling the pair with the target of the support level of 1.1742. In this case, the potential Take Profit is 60 points.