Hot forecast and trading signals for GBP/USD on September 7. COT report. Nonfarm Payrolls report could not spoil the mood The GBP/USD pair traded almost identical to the euro currency on September 4. The pair's quotes stood in one place in the morning and practically did not move from it in the afternoon, a pullback to the downside was made, followed by a similar upward pull. As a result, the pound/dollar pair ended both day and week between the Kijun-sen and Senkou span B lines, which only confuses the current technical picture, as it does not allow us to clearly assume which direction it will move. On the one hand, the downtrend is visible to the naked eye, but it is visible on the hourly chart. The current downward movement does not even pull a correction on higher timeframes. Thus, as in the case of the euro, we believe that the dollar's potential for growth is very limited at this time. 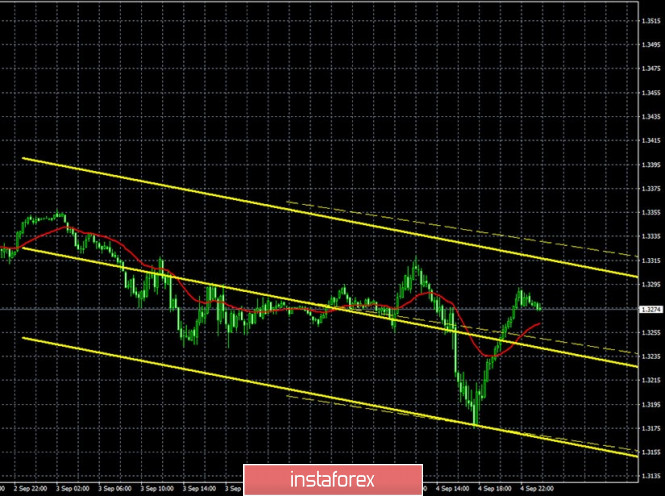 Both linear regression channels are directed downward on the 15-minute timeframe, thus, we can conclude that the downward trend is weak, but continues to persist. The latest Commitments of traders (COT) report for the British pound turned out to be even more unexpected than the one for the euro. If non-commercial traders were already shorting the euro, the same category of traders continued to buy the pound. In total, professional traders opened 5,500 new Buy-contracts and 3,000 new Sell-contracts during the reporting week (August 26 - September 1). Thus, their net position even increased by 2,500, according to the new COT report. In principle, such data perfectly describes what is happening in the foreign exchange market, since the British currency continued to grow during all five trading days included in the report. The pound has been depreciating in the period from September 1 to the present day, but the latest COT report shows that there are no hints that professional traders have stopped looking towards the pound (unlike the euro). Therefore, we can not find a correlation between the two main competitors of the US dollar at this time, although both major currency pairs have been moving almost identically in recent days based on the COT reports.

The fundamentals of Friday, September 4, mainly came down to the Nonfarm Payrolls report. We already mentioned in the euro article that, in general, the package of macroeconomic data from across the ocean turned out to be quite optimistic. The unemployment rate fell while wages rose. The Nonfarm Payrolls report turned out to be worse than forecasted, but not much. 1.4 million new jobs outside the agricultural sector were predicted, but in reality, 1.371 million were created. There was only a 29,000 difference. Therefore, we can not conclude whether this report was weak or considered a failure. Therefore, it should not have spoiled the general picture of the state of affairs. Nevertheless, after the US dollar slightly strengthened, it began to fall in price anyway. It had an excellent chance of growth on this day. Consequently, the bears still see no good reason to sell the euro/dollar and pound/dollar pair. The general fundamental background in America remains rather complicated and, most likely, it does not allow the US dollar to show confident growth.

We have two trading ideas for September 7:

1) Buyers continue to be in the shadows. The quotes of the pound/dollar pair have settled below the ascending channel, thus, it is not relevant to buy the pound at this time. So far, there are no prerequisites for reviving the upward trend, and the bears managed to overcome the Kijun-sen and Senkou Span B lines in half. Thus, the bulls are not going to return to the market, and it is recommended to only consider buying when the price has settled above the Kijun-sen line. (1.3328) with the target of the resistance level 1.3451. Take Profit in this case will be about 100 points.

2) Bears continue to push slowly, so short positions remain relevant with the target of the support area of 1.3157-1.3183, but you are advised to reject this target very carefully, as sellers show their weakness day after day. Take Profit in this case will be no more than 50 points.