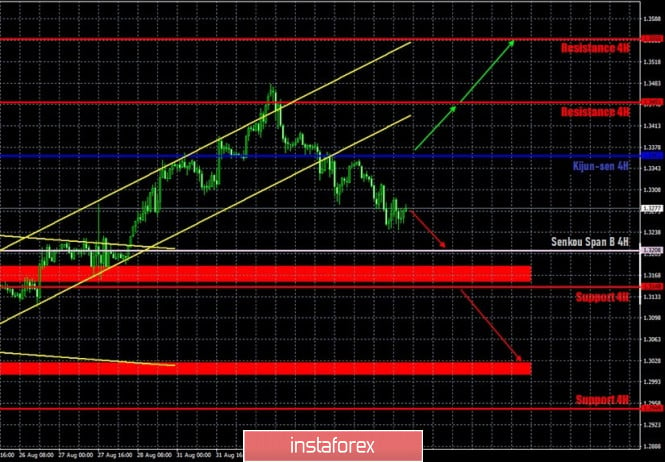 The GBP/USD pair, in contrast to the euro, moderately moved down for most of the day on September 3, Wednesday. Therefore, we believe that the upward trend is coming to an end. At least now it looks as if the bulls have finally had enough and are ready to put the initiative in the bears' hands. Consolidating quotes below the ascending channel was an important signal. Now the Senkou Span B is in the way of the sellers' plans to move down, which is the strongest among the Ichimoku indicator lines. If traders manage to overcome it, then the chances of forming a new downward trend will significantly increase. 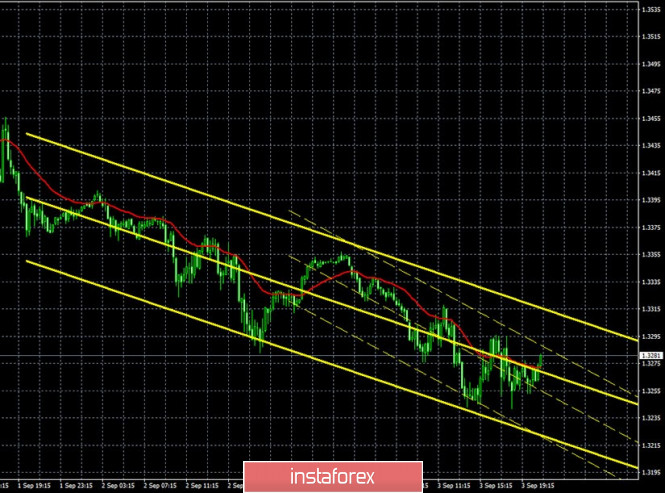 Both linear regression channels continue to be directed downward on the 15-minute timeframe, since the pair has started a correction. The latest Commitments of Traders (COT) report for the British pound, which came out on Friday, was completely neutral. Professional traders did not open new Buy-contracts during the reporting week on August 19-25, despite the fact that the UK currency has grown against the dollar and continues to do so at the beginning of the new week. On the contrary, 9,700 Buy-contracts and 9,100 Sell-contracts were reduced. Thus, the net position for the non-commercial category of traders even slightly decreased. However, this change is so insignificant that it makes no sense to draw conclusions on it. Therefore, the general attitude of big traders remains the same. Trading days from August 26 to September 1 will not be included in the new COT report, and the pound grew in price on such days. Thus, we can see that non-commercial traders seriously increased their net position in the new COT report, while the fall from the last 24 hours is unlikely to be reflected in the report. However, take note that the fall itself is not that strong, currently at 230 points. Therefore, it is unlikely in principle to be reflected in the COT report.

The fundamentals for the British currency were very weak on Thursday. However, despite the fact that another round of talks between Brussels and London failed, which further reduces the chances of concluding a deal by the end of 2020, traders are in no hurry to get rid of the pound sterling. All of the downward movement looks like a correction now, and afterwards, an upward trend will resume. Market participants continue to attach great importance to the "four crises" in the US, and this is why the majority of investors and traders are afraid of serious investments in the dollar. At least two important reports will be released in the United States on Friday: the unemployment rate and Nonfarm Payrolls. And since traders are currently ignoring all the news and data from the UK, we recommend focusing on these two reports instead. If results show that forecasted values are exceeded, then we can expect a new round of growth for the US currency. If not, then it could offset the bears' efforts again.

1) Buyers continue to be in the shadows. The quotes of the pound/dollar pair have settled below the ascending channel, therefore, it is not relevant to buy the pound at the moment. So far, there are no prerequisites for reviving the upward trend. We can expect buyers to return to the market only if sellers fail to cross the Senkou Span B line. But it is not recommended to consider buy positions until the Kijun-sen line is crossed. The targets are 1.3451 and 1.3555.

2) Bears continue to slowly exert effort, so short positions remain relevant while aiming for the Senkou Span B line (1.3208). The 1.3005-1.3025 area will be the next target for the shorts, but you are advised to trade with this target after overcoming the 1.3148 level. Take Profit in this case will be about 100 points.