Hot forecast and trading signals for GBP/USD on September 9. COT report. Pound fell to the psychological level of $1.30. 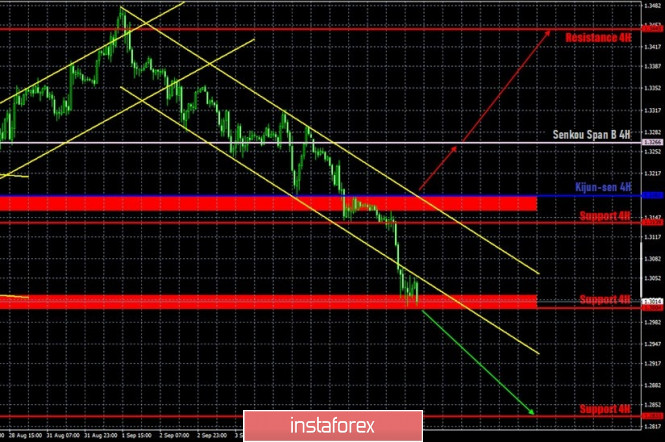 The GBP/USD currency pair, unlike EUR/USD, does not waste time on the flat and continued to sharply fall on September 8, which resulted in reaching the support area of 1.3004-1.3024. Rebounding from this area can provoke an upward correction. However, the trend is likely to remain on the downside in the near future, as the downward channel signals this, and the price even managed to go below it, which fuels the descending movement. Actually, it does not take long to look for reasons why the pound should fall. Unlike the euro, the pound sterling has plenty of them. Therefore, the question now stands as follows: how long do traders intend to get rid of the pound this time, given that the final talks on a trade deal is almost a failure? In case the 1.3004-1.3024 area has been overcome, the next target for the fall will be the 1.2833 level. 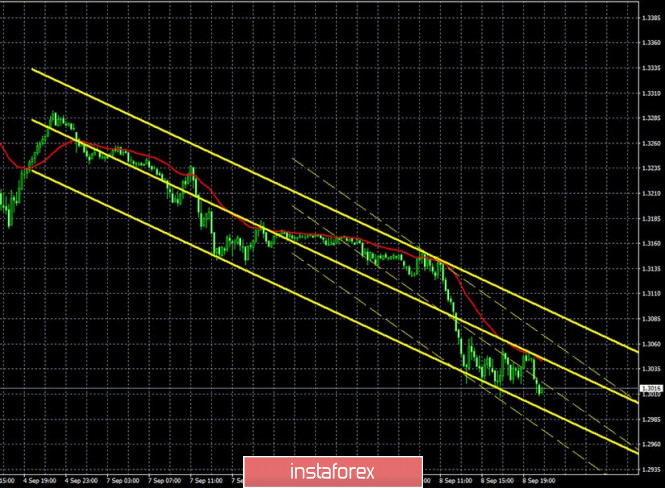 Both linear regression channels are still directed to the downside on the 15-minute timeframe, so we can conclude that the downward trend will continue. The latest Commitments of Traders (COT) report for the British pound was more unexpected than the euro's report. If non-commercial traders already shorted the euro currency, the same category of traders continued to buy the pound sterling. In total, professional traders opened 5,500 new Buy-contracts and 3,000 new Sell-contracts during the reporting week (August 26 – September 1), so their net position even increased by 2,500, according to a new COT report. In principle, these data perfectly characterize what is happening in the foreign exchange market, since the pound continued to grow during all five trading days included in the report. The pound has been getting cheaper on September 1 to this day, but there is no hint that professional traders have stopped buying the pound in the latest COT report. But the new COT report may show a serious decrease in the net position for the "non-commercial" category.

The fundamental backdrop of Tuesday, September 8th, boiled down to Brexit-related topics. In principle, there wasn't any news on it. Market participants continued to sell the British currency, as the chances of a successful outcome of negotiations with Brussels became even less. And if anyone has forgotten, the absence of a deal with the EU is extremely unprofitable for the UK and its economy. However, Prime Minister Boris Johnson continues to pretend that he is ready to trade with the European Union according to the WTO rules. He may be ready, but what will millions of Brits say when delays begin in the supply of certain goods, especially when it comes to essential goods? Prices for goods imported from the EU will rise, and it will be more difficult for British manufacturers to market their products to EU countries. Thus, the current drop in the pound, from our point of view, is fully justified. Now, only the United States can prevent it if their leader starts a new round of discouraging statements or, even worse, actions on the domestic and international arena. This can bring back interest to the British currency. No major macroeconomic releases from the UK or the US are scheduled for Wednesday.

We have two trading ideas for September 9:

1) Buyers are out of the market, bears rule the show. Thus, you are advised to consider buying the pound when the price settles above the descending channel with the first target being the Senkou Span B line (1.3266). Take Profit in this case will be about 70 points.

2) Sellers continue to pull down the pair, therefore, short positions remain relevant with the target of the support level of 1.2833, but it is recommended to resume trading downward if the price manages to overcome the support area 1.3004-1.3024, which was already reached yesterday. Take Profit in this case will be about 150 points.