Markets go into standby mode before the key Fed meeting on September 17. Overview of USD, NZD, and AUD

On Monday, there was low volatility in the market due to the lack of new benchmarks, as the United States celebrated Labor Day. On the other hand, the UK temporarily became the provider of main news. Prime Minister Johnson threatened to withdraw from trade negotiations with the EU, as a result of which the British pound showed the worst dynamics among the G10 currencies. There have also been reports that the UK is preparing to revise the Northern Ireland Protocol (a key part of the Withdrawal Agreement) in its Internal Markets Bill.

As a result, Euro Stoxx 50 gained 1.6%, while US S&P 500 futures rose 0.5%. The best dynamics were shown by shares of industrial companies. In part, this is due to positive expectations regarding the creation of a "correct" vaccine against coronavirus in October.

China also supported the positive growth yesterday. Their trade balance in August turned out to be better than expected due to export growth (+ 9.5% y/y against the forecast of 7.5%), while export growth may indicate a revival of trade and, in general, an increase in global demand.

Markets are moving into a state of expectation before the key Fed meeting on September 16-17. In view of this, there will be quite a lot of important macroeconomic indicators published by the end of the week, the reaction to which will show the general background of expectations. For now, we must proceed from the fact that the dollar has a good chance to strengthen continuously.

The forecasts for the NZD remain broadly unchanged as the key factors affecting the exchange rate, namely GDP growth and inflation in September, have not yet been revised. The RBNZ will hold its meeting a week after the Fed, that is, September 23, and so, officials remain cautious in their comments. 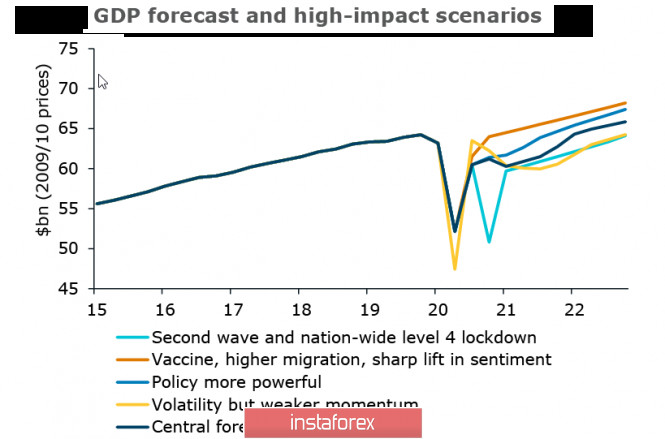 Adrian Orr, Head of the RBNZ, reiterated the central bank's key approaches to monetary policy in a speech last week, but a few points need to be highlighted. First, he said he would like to see interest rates lower than they are now. Now, the rate is 0.25%, so Orr's statement should be viewed as an intention to go into the negative area. At the same time, he confirmed its intention to withstand the commitment not to cut the rate for at least a year after the March decline, and therefore, the rate will not drop below zero in September (this is a bullish factor for the NZD), but will most likely take place in April next year or later.

For now, markets are waiting for the expansion of the stimulus program to $ 120 billion, and this step can be announced in 2 weeks. The question is the yield spread. J. Powell, announcing that the Fed will not be targeting the yield curve, weakened the dollar, but the RBNZ does not want to see TWI growth, and so, will have to soften its position after September 17, adjusting it against the Fed.

To simply put it, these are the expectations of the market. So while there is no positive wave, investors remain cautious. NZD futures are neutral with a slight increase in longs last week, but a net long position of 0.47 billion is too small to be considered bullish. The estimated price is below the average and below the spot, generally neutral with a slight bearish edge. 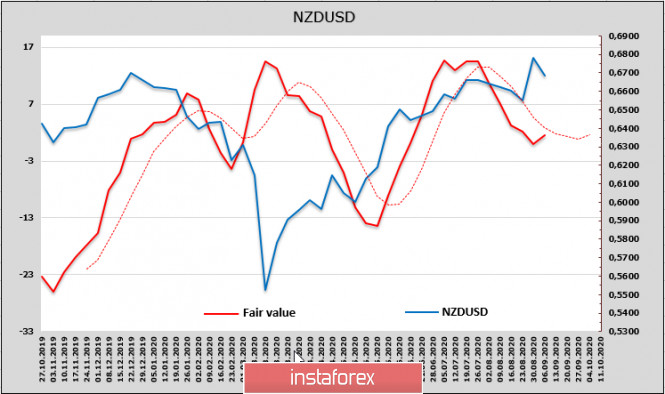 Technically, the NZD dropped to the support zone 0.6690/6710, with no impulse. A movement to 0.6590 is a little more likely on the background of profit taking before the FOMC meeting on September 17.

Australia's recent macro indicators have added uncertainty. The index of activity in the service sector from AiG fell in August from 44 to 42.5%. On the other hand, the index of the number of vacancies showed a very symbolic growth, although the pace of recovery is questionable. NAB Bank reports that the business environment and confidence indexes remain in the negative zone.

A long or short position on the futures market has not been formed, and the settlement price is directed downwards. 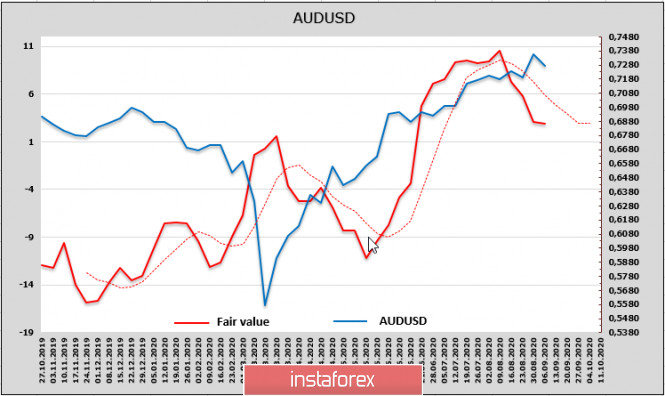 From a technical point of view, the impulse remains growing and has not been used up, but the fundamental criteria are in favor of a bearish reversal. A reversal to the 0.7240/60 support zone looks more likely, but this scenario requires macroeconomic or political reasons.