Optimism for the Euro: bulls are in a gloomy state, bears are off to a low start

According to analysts, there are no obstacles for the European currency to stop growth, especially after the recent support from the ECB. However, the "bulls" on the euro, unlike those on the dollar, will have a hard time. Experts believe that in this situation, the euro bears will win if they take the lead in time and do not miss the favorable time for sales.

They believe that the "bulls" on the EUR/USD pair should not count on divergence in economic growth in the Eurozone, although this is the strongest driver for the euro. Such growth is uneven: it is slowing down in the fourth quarter, after a surge in the third quarter of 2020 amid lifting of restrictions related to the COVID-19. Experts believe that this will give the "bears" a head start on the euro, followed by a likely breakdown of the support levels of 1.1800 and 1.1770. If this scenario is implemented, analysts warn that the risks of a Euro correction will increase.

After the ECB meeting and comments from Chairman Christine Lagarde, currency strategists at Goldman Sachs say that the European currency has a chance to benefit from the prolonged weakening of the dollar. The bank is confident that the fair price of the EUR/USD pair should be around 1.3000, and not 1.2000, as previously assumed. They consider the euro undervalued and expect its further rise. Attempts of such growth are periodically recorded by the market. This morning, the EUR/USD pair started at 1.1894-1.1885. This is below the recent weekly high of 1.1910, recorded after the meeting of the European regulator. Later, the euro tried to accelerate and rose to the level of 1.1898, striving with varying success to new peaks. 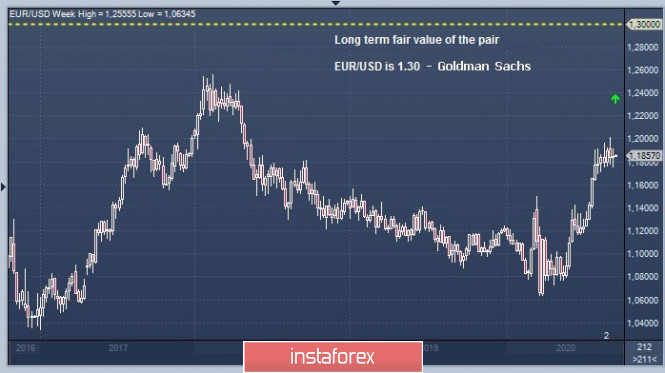 On the other hand, the markets are disappointed and the euro "bulls" are having difficulties due to the reaction of C. Lagarde and several representatives of the ECB, who are not too worried about the potential price growth of the euro to 1.2000. Last Friday, the single currency completed near the level of 1.1800. After the decision of the ECB, the euro briefly exceeded the level of 1.1900, but has now surrendered its positions. The European currency is still 8% more expensive than at the start of the COVID-19. Against this background, investors were worried by the excessive optimism of C. Lagarde and the similar position of the ECB on the rise in the euro. The market expected more decisive actions from the regulator aimed at lowering the exchange rate of the single currency.

As a result, the actions of the central bank were assessed as "hawkish", although C. Lagarde and ECB's representatives did not strive for this. At the meeting, optimism was expressed about the pace of recovery of the euro economy, which helped the regulator to adjust the forecast for this year. According to current estimates, the eurozone's GDP will decline by 8% in 2020. Analysts say that this is slightly less than the previous figure of 8.7%.

Meanwhile, markets' disappointment with regard to the regulator was facilitated by not very inspiring macro statistics. In the last month of summer, the inflation rate in the region went into a negative zone, falling to -0.2%. In July this year, this indicator was confidently kept at the level of 0.4%. In this situation, the ECB has revised its inflation forecast for 2021 to 1% from the previous 0.8%. This alarmed experts, since the statistics for August 2020 record a decline in price pressure. In such a situation, the growing euro only worsened the situation, slowing down the rise in import prices and increasing the cost of export products.

The growth of the European economy by 1%, despite the optimism of the ECB leaders, is insufficient for a sustainable long-term recovery of the region. Experts do not exclude the introduction of additional measures of monetary incentives in the near future. The assistance can be implemented in the form of cutting interest rates or in the form of an increase in the asset repurchase program. However, the current situation is capable of negatively affecting the dynamics of the euro, and then the "bulls" and "bears" will have to fight for leadership. It is unknown which of them will win the market over to their side, but experts emphasize that the confrontation promises to be serious.

Interesting? Write a comment below.
 #Optimism for the Euro: bulls are in a gloomy state, bears are off to a low start
Forward 
Backward 