Overview of the EUR/USD pair. October 1. The most pointless, angry, and chaotic debate in US history. 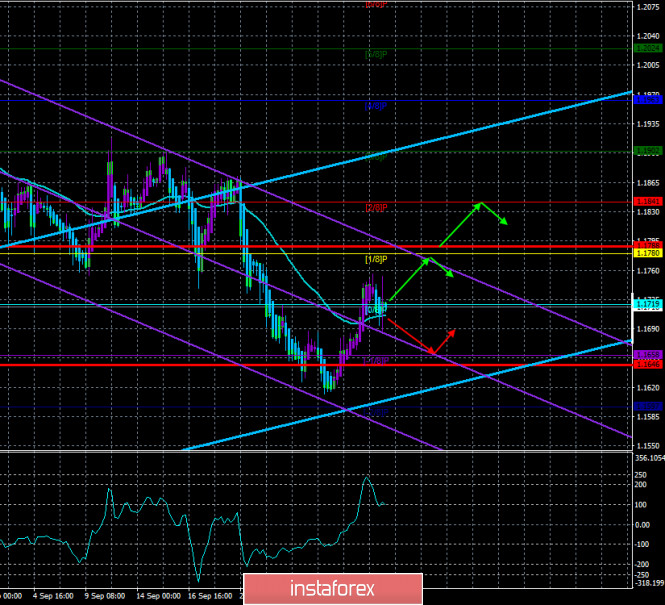 The US currency paired with the euro traded very calmly on the third trading day of the week, although a huge number of potentially important events were planned for this day. However, market participants reacted to them rather sluggishly, thus, there is no need to talk about serious exchange rate changes. We have repeatedly stated that the long-term fundamental background plays an important role for the pair now, not macroeconomic statistics or "one-time" news. By and large, traders continue to ignore most of the economic data, because they are now completely predictable. First, there was a collapse in macroeconomic indicators, which did not cause anyone any surprise, since the epidemic and crisis covered the whole world. Now, after the removal of "lockdowns", the recovery of all countries' economies has begun, which is also absolutely logical.

Important and interesting news began to arrive on Wednesday night. It was on this day in the American city of Cleveland that the first debate between Donald Trump and Joe Biden took place. The debate was set aside for 1.5 hours, divided into 15-minute segments devoted to each of the six topics (the political "background"; the situation in the Supreme Court due to the death of Ruth Ginsburg; the COVID-2019 epidemic; the economy and its recovery from the pandemic; racial conflicts and problems; protection of electoral processes). According to media reports, about 100 million Americans watched the live broadcast. Naturally, most of them wanted specific answers to specific questions. According to statistics, one in ten Americans has not yet decided who they will vote for in the election. The debate could also change (at least slightly) the balance of power between Biden and Trump. In recent weeks, data on political ratings have varied. Some opinion polls show that the gap of 8-10% has not decreased, some indicate that Trump has managed to reduce the gap to 2-3%. We are inclined to believe that the gap has remained the same. All in all, the debate was potentially a very interesting event that disappointed everyone.

Almost all American media called the event the worst in the history of the United States. Both candidates spent most of the allotted hour and a half insulting and accusing each other of all mortal sins. Bickering, interrupting, inciting, provoking – these are the terms that best reflect what happened last night in America. Most Americans wanted to get a clear answer to the question: what will a candidate do if he gets the post of President of the United States? Instead, they received an online showdown between Trump and Biden, which had previously only taken place in absentia. It should be noted at once that most media outlets still record the results of the debate as Biden's asset. Six out of ten observers believe Biden performed better than Trump. Both presidential candidates, however, used their own tools, to which everyone has long been accustomed. Trump – rude, accused, interrupted, did not allow to speak, put pressure on Biden and host Chris Wallace. Biden also "rode" all of Trump's "achievements" as President in his first term, from the "coronavirus" to racial scandals. In general, it seemed that Trump continues to post messages on the social network Twitter. Many experts noted that the US President constantly made ridiculous statements that were not relevant, told gossip, and shared absolutely unsubstantiated information about Biden. The results of this "boorish domination" of Trump were as follows: only 29% of respondents believe that Trump was truthful and sincere in his statements, and only 28% believe that the current President performed better than his opponent. Biden was supported by 69% of respondents, and another 65% said that the attacks on Trump were fair. Thus, the winner of the first round of the confrontation can be considered a Democrat. However, you should not make an "innocent lamb" out of it. Biden used "sharp words" as well as Trump, openly called on Trump to "shut up" and called him a "clown."

Thus, according to the common opinion of Western media and experts, yesterday's elections will have almost no effect on the balance of power before the elections, which are only 34 days away. At the end of the debate, Donald Trump could only strengthen the faith of his supporters in himself, and Joe Biden – to show that his solid age is not a hindrance and he quite cheerfully opposed his opponent.

Fast forward from America to the European Union. Christine Lagarde gave another speech earlier this week. During it, the head of the ECB said that the regulator will do everything necessary to stimulate the economy in the future and help it recover from the coronavirus pandemic. She said the current level of economic recovery is "incomplete" and the prospects for further recovery are "uncertain." According to Lagarde, consumers are very cautious about spending money, and companies are very reluctant to invest. In principle, this is not surprising, given the scale of the crisis and the beginning of the second "wave" of the epidemic in Europe. "The health crisis will continue to put pressure on economic activity and pose downside risks to the economic outlook," said Christine Lagarde. She also noted negative inflation and said that the CPI will remain negative for some time due to high pressure on it due to the growth of the European currency. In general, a neutral performance.

As for the euro/dollar pair and the impact of all events on it, it was quietly trading for most of the day near the moving average line. It is clear that traders are again confused. On the one hand, it seems that buying the euro currency looks more attractive due to the complete uncertainty in the future of the United States. On the other hand, the European currency has already risen quite seriously in the last few months. Thus, we can only wait and analyze the technical picture. We are still inclined to the option that the euro currency will continue to grow. It may not be strong, however, it will continue. To be honest, it is absolutely normal practice when the national currency becomes cheaper before the elections. Something similar may happen to the dollar in the next six weeks.

The last thing I would like to note is that in the coming weeks, there will be two more rounds of debates between the current President and the former Vice President of the United States. Despite the fact that there was almost no reaction to the first round, this does not mean that it will be the same for the next two rounds. 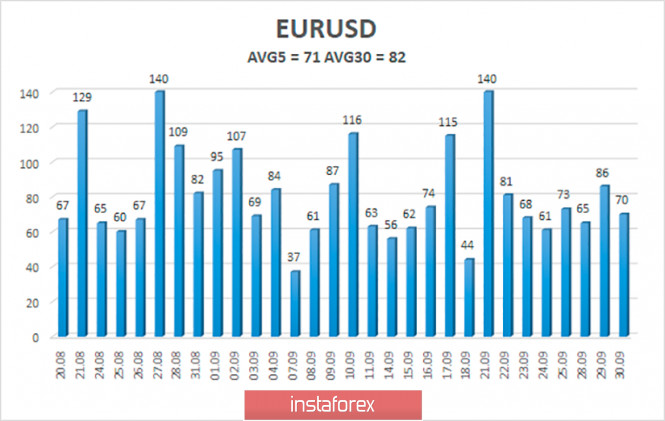 The volatility of the euro/dollar currency pair as of October 1 is 71 points and is characterized as "average". Thus, we expect the pair to move today between the levels of 1.1646 and 1.1788. A reversal of the Heiken Ashi indicator back down may signal the end of an upward correction.

Interesting? Write a comment below.
 #Overview of the EUR/USD pair. October 1. The most pointless, and chaotic debate in US history., angry
Forward 
Backward 