Overview of the EUR/USD pair on September 4. The last months of Donald Trump pass without improving the situation in America. 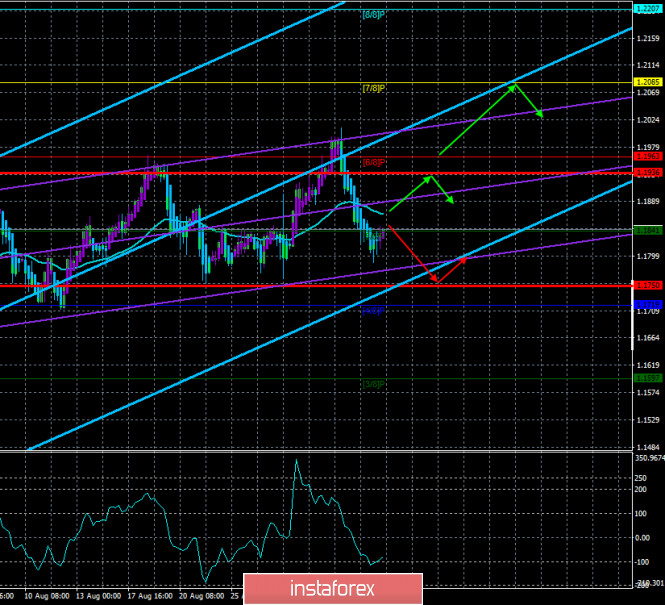 The EUR/USD currency pair has started a new round of downward movement. Based on this, we can conclude that it will be as weak and indistinct as the previous three. I would also like to note that each next minimum price is higher than the previous one. In other words, bears can't even update the previous minimum for more than three months. This applies even to trades during the last month. Thus, if the downward movement does not continue from the current positions, then traders will be entitled to expect a new upward movement to the area of the previous maximum – 1.2011. By the way, an interesting feature is that each previous maximum price is also lower than the next. Thus, we have a classic upward trend like in the textbook. Based on this, the future of the US currency is still unclear because it is not the increased demand for the dollar that caused its strengthening. Presumably, it was buyers in the market who fixed some of the positions to buy that provoked another pullback down.

Meanwhile, it is still very difficult to say what guides major traders when making trading decisions. The fundamental background remains very extensive. There are a huge number of factors that can hypothetically influence the preferences of traders. For convenience, we can combine all the negatives from overseas into one group: "coronavirus" epidemic, "coronavirus" crisis, lack of a vaccine, political crisis (the confrontation between Democrats and Republicans), social crisis (racial scandals, rallies, and protests), high unemployment, strongest drop in US GDP, possible constitutional crisis (if Trump refuses to accept the election results), fall in US bond yields. Thus, the situation has recently become slightly better only in the epidemiological sphere. The number of daily recorded cases of the "coronavirus" has decreased to 30-40 thousand. However, this is where the positive news from overseas runs out. On closer inspection, even this single positive point can hardly be called "positive", since the COVID-2019 virus continues to spread among Americans. Thus, slowing down the economic recovery and severely reducing economic and business activity. There is no real positive news. Moreover, huge problems arose with the adoption of a new package that stimulates the economy. Democrats and Republicans should have come to a common decision in early August when the previous package of assistance to the economy ended. However, fierce negotiations were going on throughout August, and their result was a failure. The maximum that Donald Trump's party agreed to do is to increase the offer to $ 1.3 trillion. Democrats also agreed to lower the proposed package to 2.2 trillion. Thus, there are still 0.9 trillion "disagreements" between the parties. House Speaker Nancy Pelosi said this week that "the differences remaining between the parties are serious". According to Pelosi, the administration of Donald Trump does not realize the seriousness of the situation in which Americans who lost their jobs due to the "coronavirus crisis" found themselves. "During our conversation, I once again expressed my hope that Republicans will sit down at the negotiating table and work to save the lives and livelihoods of Americans," Pelosi said. Democrats believe that it is impossible to save on vital things in times of crisis and offer to finance the unemployed, small businesses, children, schools, and so on with a new package. Republicans are concerned about the 4 trillion national debt for 2020, so they suggest saving on a new aid package, which should also motivate unemployed Americans to return to work, rather than sitting at home on benefits.

As for ordinary macroeconomic statistics, on Wednesday, September 2, a fairly important report on the change in the number of employees in the US private sector from ADP was published in the States. This report is considered to be the second most important after Nonfarm Payrolls. Its value was 428,000, while forecasts predicted an increase of 950,000. Yesterday, in the European Union, business activity indices were slightly higher than forecast values, and retail sales, on the contrary, were much worse. But these statistics did not have much impact on the course of trading.

What conclusions can be drawn in the end? America is full of preparations for the elections. Most of the news from this country is now related to Donald Trump or Joe Biden. There is simply no news about the "coronavirus" or the trade standoff with China right now. It seems that these topics are put on pause and everyone is waiting to see who will win the election. After the answer to this question is known, the topics will be "taken off the pause". In general, the fundamental background does not change and certainly does not become more favorable for the US currency. Thus, from a fundamental point of view, the US dollar should not grow strongly compared to the euro currency now. At the same time, there is zero news from the European Union. Thus, there is no point in trying to take the European fundamental background into account at all. As for macroeconomic statistics, most of the reports continue to be ignored by market participants. Thus, it turns out that attention should now be paid to technical factors that should be passed through the prism of the general fundamental background. If something in America changes for the better, then we can reasonably expect to continue moving down. Up to this point, the fall in quotes can continue solely on the desire of buyers to get rid of purchases of euro currency (to fix profits on them). However, until the price breaks the last local minimum (1.1754 or 1.1762), the downward movement will also not be able to continue.

Also, do not forget about the election, as this will remain the hottest topic in the United States. According to the latest information, Donald Trump began to reduce the gap from Joe Biden. 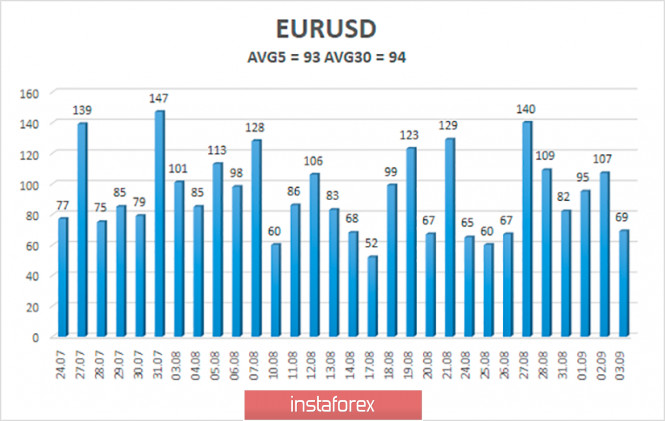 The volatility of the euro/dollar currency pair as of September 4 is 93 points and is characterized as "high". Thus, we expect the pair to move today between the levels of 1.1750 and 1.1936. A reversal of the Heiken Ashi indicator back down will signal a possible resumption of the downward movement, as well as a price rebound from the moving average line.

The EUR/USD pair may continue its downward movement. Thus, it is recommended to open new short positions after the end of the upward correction round, which is signaled by a downward reversal of the Heiken Ashi indicator or a rebound from the moving average, with the goal of 1.1750. If the price is fixed above the moving average, it is recommended to trade for an increase with the goals of 1.1936 and 1.1963.

Interesting? Write a comment below.
 #Overview of the EUR/USD pair on September 4. The last months of Donald Trump pass without improving the situation in America.
Forward 
Backward 