Overview of the EUR/USD pair. September 10. What to expect from the ECB meeting? 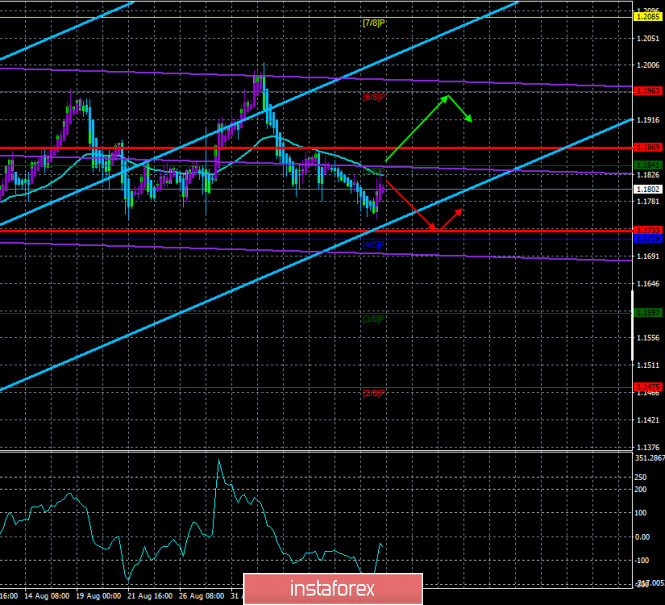 For the third trading day of the week, the EUR/USD pair was again held in absolutely calm trading with low volatility. In the American trading session, the markets "recovered" a little and began to trade more actively. We would like to assume that the sharp decline in the US currency in the afternoon was triggered by some fundamental or macroeconomic events. However, in practice, everything is much simpler. The price once again approached the lower border of the side channel 1.17-1.19, from which it has been constantly rebounding in the last month and a half. This time, the pair's quotes did not even fall to the level of 1.1700, and the upward turn occurred around 1.1750. Thus, the bears once again showed their extreme weakness, and the US currency still does not find any reason to strengthen in a pair with the euro.

On Thursday, September 10, it is planned to summarize the results of the meeting of the European Central Bank. This event is always of interest to market participants, as there are only 8 such meetings a year. Now that the whole world is covered by the coronavirus pandemic, each meeting of the regulator is of particular interest. After all, no one will deny that the pandemic has had a huge impact on the economy of all countries of the world. By the way, it was the European Central Bank that reacted the least to the pandemic and the crisis it caused. At least, the Central Bank of the European Union has not lowered the key rate yet, unlike the Fed and many other central banks. Although, of course, an assumption should also be made here, since the ECB rate was negative even without the pandemic (-0.5%).

However, questions in the European Union arise recently on monetary policy and the state of the economy. ECB economists are seriously concerned about the growth of the European currency in the past few months and believe that it can have a very negative impact on the already struggling economy. This is what the ECB's chief economist, Philip Lane, said last week. Other members of the ECB's Board of Directors also believe that a strong euro will hinder EU exports, lead to even lower prices (negative inflation) and increase the need to apply additional monetary incentives. Further growth of the euro may significantly slow down the economic recovery of the entire European Union. ECB representatives also believe that the revision of the Fed's attitude to inflation is a "dovish" factor, due to which the US dollar may continue to fall. In addition, the demand for the euro may increase in the future since markets may consider the higher interest rates in the Eurozone "in structural terms". The European Union's inflation rate continues to decline and the latest report showed that prices in the European Union decreased by 0.2% compared to August of the previous year. In fact, this is deflation. Moreover, weak inflation will severely slow down economic growth and recovery. Thus, the members of the ECB Board of Directors continue to "keep their finger on the pulse" and are ready to reconsider their attitude to inflation in the near future, as well as take the necessary additional measures to stimulate the economy. Thus, most economists believe that the ECB in 2020 will decide to further expand the quantitative stimulus program or the program to counter the pandemic (PEPP). These measures will be aimed at supporting the economy and reducing the euro exchange rate in the foreign exchange market.

What does all this mean for the euro currency and what are its prospects? The outlook for the euro remains very positive since markets persistently do not want to get rid of this currency. In the UK, there is Brexit, Boris Johnson, and failed negotiations with the European Union, which puts pressure on the pound. Meanwhile, there is nothing like this in the European Union. The EU's macroeconomic indicators leave much to be desired, however, they are even worse in the States. In addition, the "coronavirus epidemic" is still raging in the United States (although the incidence rates have more than halved in recent weeks), the political crisis persists, and the conflict with China persists, which is completely unclear how it can end. Most importantly, the country continues to move towards elections, which are less than two months away. Further, the closer a country gets to an election, the more apprehensive international investors are. We can't say unequivocally that the figure of Donald Trump is bad for America, and Joe Biden is good. However, the results of the presidential term of Donald Trump are such that not everyone will want to vote for him. However, according to many political analysts, Trump should not have won in 2016 either. It is possible that in the 2020 elections, he and his team will do everything possible and impossible just to keep power in their hands. We have repeatedly written that Trump may not recognize the election results if he loses. He may claim that the results are falsified in some states, which will lead to lawsuits, new votes, and recounts. In general, we believe that Trump will not just leave the White House. In other words, the current situation in America is completely unclear. And investors don't like uncertainty. Moreover, it is not at all clear what will happen to major American manufacturers whose production is located outside of America if Trump retains his post. The US leader has already promised that he will put pressure on American companies, especially those that create jobs in the camp of the main enemy of the US - China. Trump is going to seek the return of production facilities to the United States, and if companies refuse, he is going to impose taxes and duties on their products. Needless to say, almost all major manufacturing companies in America have factories in China, Taiwan, Malaysia, etc. Because labor costs in these countries are cheap. Accordingly, many people may suffer, which will be reflected in the US stock indices. And international investors are just interested in investing in government bonds and company shares. US bond yields have been falling recently, and Trump may hunt down American companies and create a lot of problems for them... Therefore, at this time, the position of the euro currency looks much more stable. 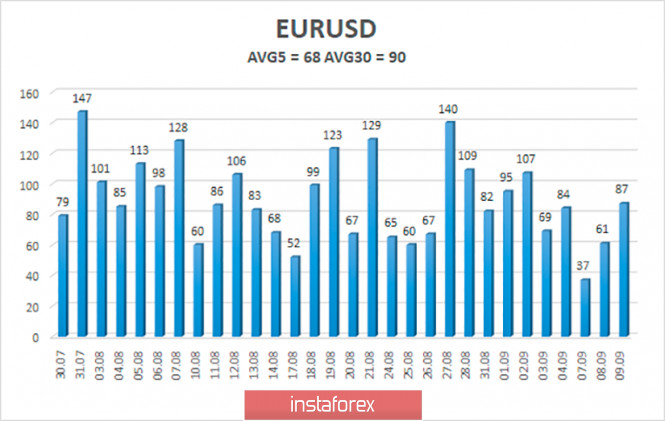 The volatility of the euro/dollar currency pair as of September 10 is 68 points and is characterized as "average". Thus, we expect the pair to move today between the levels of 1.1733 and 1.1869. The reversal of the Heiken Ashi indicator back downward will signal the completion of an upward correction.

Interesting? Write a comment below.
 #Overview of the EUR/USD pair. September 10. What to expect from the ECB meeting?
Forward 
Backward 