Overview of the EUR/USD pair. September 11. The ECB did not tell the markets anything optimistic.

On September 10, the European currency paired with the US dollar responded with rapid growth after the results of the ECB meeting became known. In the meantime, we would like to note that the pair's quotes continue to trade inside the side channel of 1.17-1.19. That is, the pair has been trading in a narrow price range for a month and a half with a slight upward bias. At the same time, the bears do not find any reason to put more pressure on the pair and update at least the previous local lows. We remind you that the price does not manage to overcome the previous lows. Thus, at this time, the pair may well make a breakthrough to the upper border of the side channel 1.19 or even higher, to the previous local maximum - 1.2011, however, this will not change the essence of what is happening.

There is nothing special to talk about the ECB meeting. The European Central Bank left the key rate unchanged at 0.0%, and deposits at -0.5%. The PEPP (Pandemic Emergency Purchase program) also remained unchanged at 1.35 trillion euros. The ECB's final communique said that rates will remain at their ultra-low levels until inflation returns to the target level of 2% or slightly lower. Given the fact that the latest inflation report showed deflation of -0.2%, it will take a long time to wait for a rate increase in the European Union. However, these data did not upset market participants too much and a new wave of purchases of the euro currency began. The problem is that no really optimistic information was received from the ECB by traders.

What did the Eurozone central bank and Christine Lagarde really say? The ECB slightly improved the GDP forecast for 2020 (to -8%) and left unchanged the inflation forecast for 2020 – 0.3%. The head of the ECB said that monetary policy will remain ultra-soft for a long time until the economy fully recovers. Christine Lagarde, like her colleagues from the Fed, also noted the high degree of influence of the "coronavirus" on the EU economy and noted that the worse things are with the epidemic, the more difficult it will be for the economy to recover. Thus, from our point of view, nothing optimistic was said during the press conference. Even the improvement in GDP forecasts does not look like anything special. In a month, if the situation with the "coronavirus" worsens, the same forecast may be lowered again. And the recent GDP report, which showed a real improvement by several tenths of a point, was ignored by the markets. It turns out that official reports are ignored by traders, and forecasts from the ECB are fulfilled? It doesn't happen that way. We believe that the reaction of traders in the form of purchases of the European currency is absolutely illogical. Today or tomorrow, we can expect a new round of downward movement. We also remind you that the pair continues to trade in the side channel and has worked out local highs from July 31 and August 6 today. Recently, the price does not like to overcome various highs and bounces off them with pleasure.

Meanwhile, in the US, Donald Trump continues to amuse the public. Unfortunately, there is really nothing funny in his speeches, however, the way the US president quickly "changes records" really makes you smile. This time, Trump said that he knew about the severity of the disease from the very beginning, about the high mortality rate of COVID-2019. However, he did not want to create panic among people. This is the new version of Trump. However, no one knew about this virus at all until 2020, thus, how could Trump know about the high mortality rate and contagiousness of the virus? Moreover, what kind of panic are we talking about? No country in the world seems to have recorded any panic due to the "coronavirus". Thus, most likely, the US president decided to once again try to whiten himself before the election, which is why he made such a statement. In addition, Trump continues to repeat that the country is waiting for rapid economic growth if he wins the election. "If we win, we will have the greatest economy in the history of our country. You will see numbers that you have never seen," Trump said.

What can we say about the results of September 10? The overall fundamental background for the euro/dollar pair has not changed at all. In the United States, the situation is still quite difficult, however, it is slightly improving, if we talk specifically about the "coronavirus"epidemic. Mass rallies and protests related to two racist scandals related to the American police have also subsided. Thus, there are still some improvements. However, as we can see, traders and investors are not in a hurry to buy the US dollar, as there are a lot of other factors that do not contribute to this. First, the economy, which continues to be knocked out. Second, there is uncertainty about the future. No one knows for sure who will win the election. Moreover, we venture to suggest that many fear a new victory for Donald Trump because the whole world has seen the results of his first term as president. Maybe Trump is not personally to blame for absolutely all of America's troubles in 2020, however, he is also to blame for this. Thus, we believe that until the presidential elections on November 3, it will be extremely difficult for the dollar to show growth in pair with the euro. The pound is a different matter. The pound has again fallen under the issue on "Brexit. But in the Eurozone, despite almost no improvement in the economy, everything looks more stable and less dangerous. Thus, in the next two months, most likely, it is the euro currency that will remain in the lead. Only technical factors speak against it now, since the pair did not correct normally after rising by more than 12 cents. 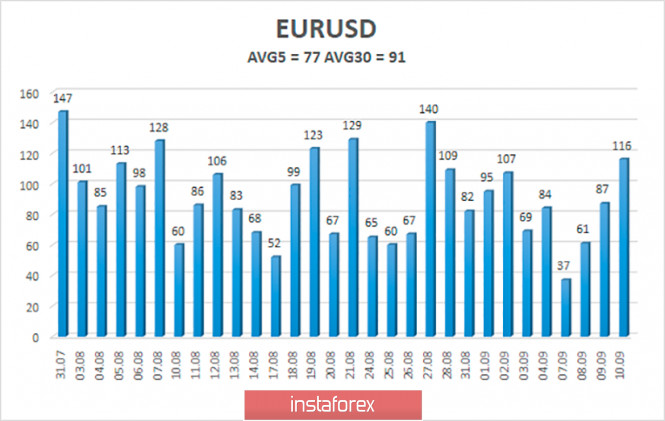 The volatility of the euro/dollar currency pair as of September 11 is 77 points and is characterized as "average". Thus, we expect the pair to move today between the levels of 1.1782 and 1.1936. A reversal of the Heiken Ashi indicator back downward signals a possible new round of downward movement in the remaining side channel.

The EUR/USD pair has fixed above the moving average line and retains the chances of growth to 1.1936-1.1963. Thus, as long as the Heiken Ashi indicator is directed upwards, it is recommended to stay in long positions with these goals. It is recommended to consider again options for opening short positions if the pair is fixed below the moving average, with targets of 1.1782-1.1719.

Interesting? Write a comment below.
 #Overview of the EUR/USD pair. September 11. The ECB did not tell the markets anything optimistic.
Forward 
Backward 