Overview of the EUR/USD pair. September 15. The epidemic in the US is not receding. 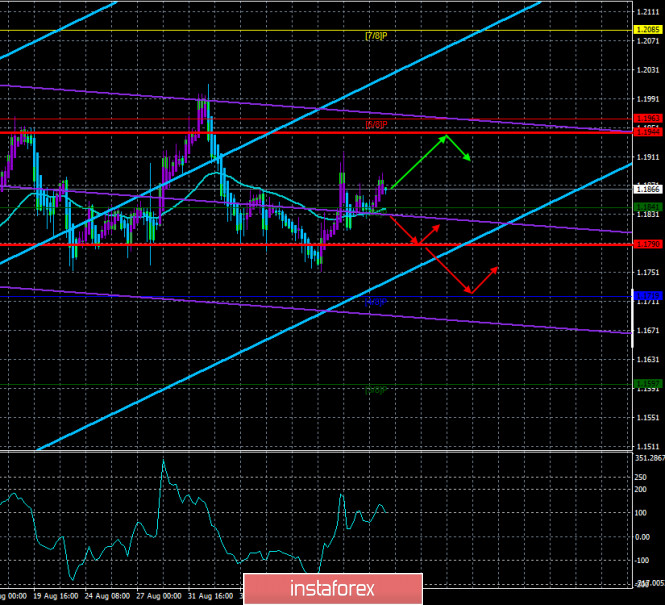 On September 14, the European currency paired with the US dollar was trading with a minimal upward bias and low volatility. Traders frankly rested on the first trading day of the week. However, in addition to the low market activity on Monday, we once again draw traders' attention to the fact that the euro/dollar pair has been trading in the range of 1.1700-1.1900 for more than a month and a half. This side channel is not "textbook". Quotes left it twice, however, the price spends 90% of the time inside it. Therefore, we once again state the flat and the fact that with the current fundamental background, traders do not know how to trade the pair in the medium and long term. On the first trading day of the week, there were no important macroeconomic publications either in the US or in the European Union. However, 80% of macroeconomic statistics are still ignored by traders. The latest example was the US inflation on Friday. The consumer price index exceeded the forecast values, however, this did not help the US dollar in any way, although inflation in recent weeks has again become a very important report and indicator for the US and EU economies.

What should be highlighted from the latest important events that affect the foreign exchange market? First, the fact that many negotiations that have been held recently tend to fail. It seems that many participants in the negotiation process set their initial goal not to agree. Now in America, Republicans and Democrats cannot agree on the volume of the next package of assistance to the American economy. In other words, we have written much more often in recent years that certain negotiations ended in failure than in success. In the United States, the situation remains quite difficult. The epidemiological crisis is slowly subsiding. Every day, fewer cases of new "coronavirus" diseases are recorded. However, the problem is that this is only a weakening, not an end to the pandemic. In many European countries, it was possible to localize the COVID virus and now there are 1-2 thousand new cases a day. In the States, the number of diseases has decreased from 60-80 thousand a day to 30-50 thousand.

The situation with the social crisis has also improved slightly. Most cities in the United States managed to suppress (by peaceful means) rallies and protests caused by racist scandals. If mass riots continue in several cities, these are isolated cases that are not of national significance. The economic crisis at this time continues to remind us of itself. In addition, the most important thing that matters both for traders and readers is that the US economy has fallen so much that it is now unclear and unknown exactly how long it will take for its recovery and how to correlate the growth rates of the recovery of the EU and US economies? It is no secret that often the exchange rate of a currency pair is formed due to supply and demand for both currencies, which is based on the results of comparing the two issuing economies of these currencies. For example, until 2020, the US dollar had been rising in price for a long time and this could be explained by the GDP indicators of the EU and the US (in the States, the growth rate was higher), the monetary policies of the Fed and the ECB (in the States, the policy was tougher). Thus, the US currency became more expensive logically. At the same time, we have ultra-soft policies of both central banks, and the fall of both economies by record values over the past few decades. We have already noted that the European economy lost only 12% in the second quarter, while the American economy lost 32%. Based on this data, the US dollar has quite rightly fallen by 12 cents over the past 4 months. However, what's next? This information has been worked out and we need to move on. And there is no data on the growth rate of a particular economy's recovery. How can you figure out which economy is recovering faster? GDP data is released every three months, and monetary policies of the ECB and the Fed are unlikely to tighten in the next 2-3 years. Thus, market participants can only guess how the recovery of both economies is proceeding.

Now we will talk about the political crisis until the presidential elections on November 3. We believe that both candidates (Donald Trump and Joe Biden) have already done everything they could, and most Americans have already made conclusions and made a decision about who they will vote for. Social research continues to show that Joe Biden is in the lead, and from our point of view, this is fair. We continue to believe that the biggest disadvantage of Trump is that he is already the president of the country and the results of his presidential term are a failure. We could say that Trump is not to blame for the "coronavirus epidemic" and "coronavirus crisis", however, it was his government that did not attach importance to this virus and its possible consequences in advance. Trump says that he knew about the fatality and danger of the virus for a long time and did not want to tell the truth to Americans, so as not to sow panic, however, why was the country not prepared for either a pandemic or an economic crisis? Because Trump was most concerned about the economy, since it is his main trump card in the election. Right now, the economy is the weakest card for Trump, and it will be extremely difficult to get any dividends from it.

Thus, the general conclusions for the US currency are not comforting. The situation in America has not changed dramatically for the better in recent weeks. Thus, traders still have little reason to buy the US dollar. Plus uncertainty. No one knows for sure who will become president, and what awaits the country in 2021 and later. 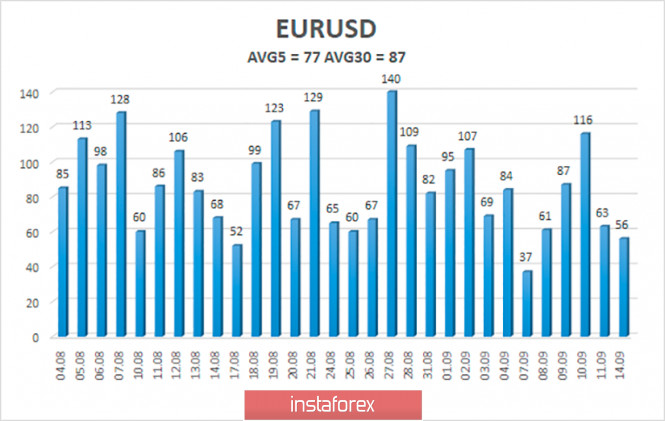 The volatility of the euro/dollar currency pair as of September 15 is 77 points and is characterized as "average". Thus, we expect the pair to move today between the levels of 1.1790 and 1.1944. The reversal of the Heiken Ashi indicator back down signals a possible new round of downward movement in the remaining side channel of 1.17-1.19.

The EUR/USD pair has fixed above the moving average line and retains the chances of growth to the area of 1.1944-1.1963. Thus, as long as the Heiken Ashi indicator is directed upwards, it is recommended to stay in long positions with these goals. It is recommended to consider again options for opening short positions if the pair is fixed below the moving average, with targets of 1.1790-1.1719.

Interesting? Write a comment below.
 #Overview of the EUR/USD pair. September 15. The epidemic in the US is not receding.
Forward 
Backward 