Overview of the EUR/USD pair. September 17. Donald Trump is going to run for a third term. 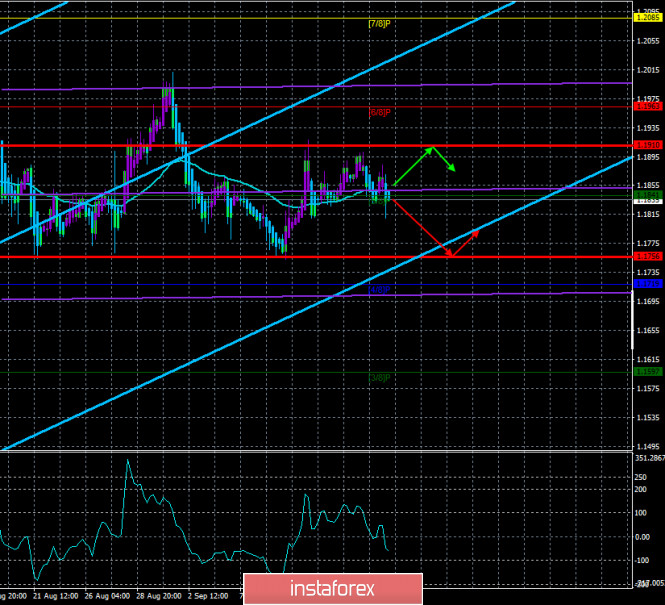 The euro/dollar pair again spent the third trading day of the week in absolutely calm trading with a slight upward bias. We deliberately do not take into account the movements that occurred after the results of the Fed meeting and Jerome Powell's speech. Often in such cases, the market acts impulsively, without relying on logic. For example, a week ago, when the ECB meeting and Christine Lagarde's speech took place, the euro increased by 100 points and it immediately fell by 100 points the next day. In other words, market participants seem to have recognized that they bought the euro for absolutely no reason during the speech of the head of the ECB. Thus, we recommend that you do not trade when the Fed's press conference will be held, and until this morning. We recommend that you trade carefully, wait for the markets to calm down completely, and make sure that there are no unexpected or sudden movements, for example, with the opening of the European trading session.

Meanwhile, the overall fundamental background for the US currency does not change at all. The most pressing issue for America remains the "coronavirus" epidemic, which has already claimed the lives of almost 200,000 Americans. Unfortunately, after a slight decline in recent days, the United States has again seen high levels of COVID-2019. For example, 52 thousand people were infected in the States yesterday. Thus, the US dollar can avoid a new wave of sales, however, it will also be very difficult for it to count on growth since the situation with the "coronavirus" remains much calmer in Europe. In other words, it's time to talk about the second wave of the pandemic. However, not all EU countries are doing so badly. For example, in Italy, which is the most affected during the first "wave", now has 1-2 thousand new cases of the disease recorded daily, which is very small, given modern realities. In Germany and all other EU countries, no more than 2 thousand new cases are recorded daily. Thus, the epidemiological situation in Europe remains much more favorable than in the United States.

Moreover, we would like to once again remind traders that in the States, Democrats and Republicans have not been able to reach a consensus on the formation of a new package of emergency financial assistance to the unemployed, small and medium-sized businesses, as well as schools, kindergartens, and other institutions affected by the pandemic and the crisis. US Treasury Secretary Steven Mnuchin said the other day that the White House will make all necessary efforts to eventually reach an agreement with Congress. The problem is that the longer the package is not accepted, the more likely it is that the US economy will start to slow down again. And in the current conditions, when 32% of GDP was lost in the second quarter, any delay can be very expensive for Americans. "I will continue to work on it. I said to Nancy Pelosi (Speaker of the House of representatives) that he is ready to negotiate at any time," said Steven Mnuchin. The day before, Nancy Pelosi also expressed optimism about new rounds of negotiations. Earlier, Mnuchin promised to coordinate and approve a new package of assistance to the economy in early August. Now the second half of September has already begun.

A little later, it was reported that representatives of the Republican Party and Donald Trump personally are ready to make an offer to the Democrats for $ 1.5 trillion. Nancy Pelosi is ready to start a new round of discussion. Recall that the last proposal of the Democrats was equal to 2.2 trillion dollars. Thus, it remains only to level the difference of $ 700 billion. Donald Trump himself said, speaking in Philadelphia: "Right before I came here, we had pretty good talks with the Democrats." Thus, the parties may still be able to reach a general agreement within 2-3 weeks. This would greatly help the US currency, which has been stalling for more than a month and a half, and even when the bulls retreated, it cannot correct normally.

At the same time, US President Donald Trump said he was going to stay on the third term. Yes, you heard right, the US leader, speaking in Nevada, said: "In 52 days, we will win four more years in the White House. Given the way we were treated, we probably deserved an extra four years." Given the fact that this is far from Trump's first statement regarding three or four terms, many already believe that the president is going to be re-elected every 4 years. Earlier, Trump also fully approved of the activities of Xi Jinping, the Chinese leader, who changed his country's legislation prohibiting him from being re-elected an infinite number of times. It seems that Trump is going to spend 12-16 years in the White House. The US President also believes that due to the impeachment procedure, which lasted about two years, he lost a huge amount of time and now "expects compensation". According to Trump, the house hearings and other legal delays took up a huge amount of time that he could have devoted to public affairs. "Despite the incredible success I achieved as president, they stole two years of our presidencies that we will never be able to return," Trump wrote on Twitter. According to the US Constitution, however, no candidate can be elected more than twice in total. Thus, Trump will have to change the country's legislation if he intends to stay in the White House for 12-16 years. However, it is unlikely that 2/3 of each house of the US Congress will approve such an initiative by Trump. And without this, the legislation will not be changed.

Based on all of the above, we believe that the overall fundamental background in the United States does not change at all. This explains the lack of desire among traders to buy the US currency. The complete uncertainty of the country's future makes many investors calmly wait for the 2020 elections, and only after that, they will build new trade and investment plans. Thus, we believe that only the technical factor can help the US currency. If the majority of buyers stop believing in the euro and start fixing long positions, this may lead to a fall in the euro/dollar pair quotes. 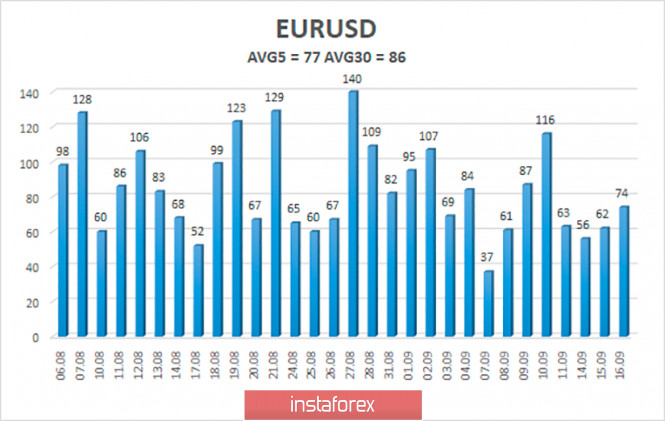 The volatility of the euro/dollar currency pair as of September 17 is 77 points and is characterized as "average". Thus, we expect the pair to move today between the levels of 1.1756 and 1.1910. The reversal of the Heiken ASHI indicator back to the top signals a round of upward movement in the remaining side channel of $ 1.17 - $ 1.19.

The EUR/USD pair is fixed below the moving average line and is trading in an absolute flat. Thus, formally, we can now consider short positions with the goal of the volatility level of 1.1756. It is recommended to re-consider options for opening long positions if the pair is fixed back above the moving average with a target near the level of 1.1910.

Interesting? Write a comment below.
 #Overview of the EUR/USD pair. September 17. Donald Trump is going to run for a third term.
Forward 
Backward 