Overview of the EUR/USD pair. September 18. The Fed announced a direct correlation between monetary policy and the "coronavirus". 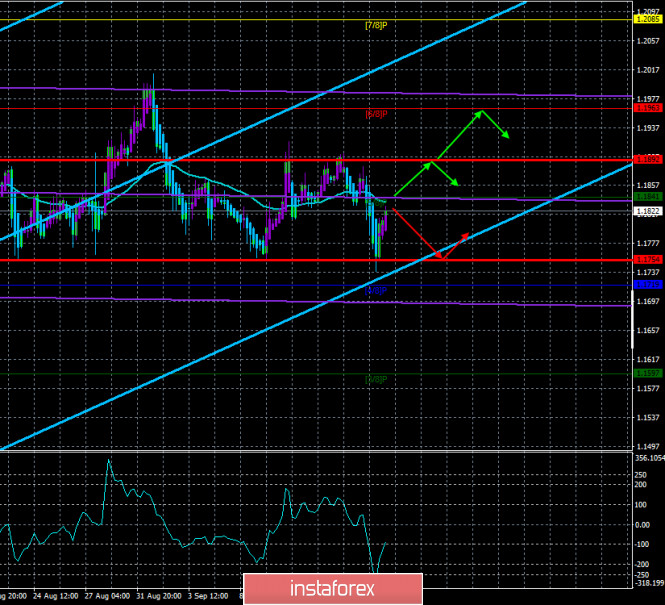 The EUR/USD pair marked the fourth trading day by multidirectional movements. Since the Fed meeting ended late last night and at the same time, its results were summed up and the speech of the head of the organization Jerome Powell took place, in principle, the rest of the day before yesterday and all of yesterday was held under the auspices of this event. Markets do not react to such an important event for only one hour after it. For example, last night, the European markets were already closed, so European large institutional traders were not able to win back the information they received. Now, when more than a day has passed since the results of the next Fed meeting were summed up, we can say with confidence that this meeting can also be considered completely neutral and "passing". There was a lot of new and fundamentally important information, however, nothing that could affect the US economy or monetary policy in the near future. The rhetoric of Fed Chairman Jerome Powell also remained virtually unchanged from previous meetings.

At the end of the last day, the pair's quotes first fell to the level of 1.1738, then they began to return to the positions from which the fall began. Thus, by the end of the last trading day, almost all losses of the European currency were leveled. What does this mean? First, the fact that the words of Jerome Powell and the results of the Fed meeting can not be considered unambiguous. They are rather neutral, however, some traders have made "their conclusions" based on them. Someone saw Powell's optimism and ignored his concerns and fears. Someone noted only negative points but did not see any positive ones. Therefore, the US dollar rose by 100 points and then lost about the same amount. Recall that just a week ago, the same thing happened at the ECB meeting and Christine Lagarde's speech. Then the European currency rose by 100 points and lost the same amount over the next day. And with all this, the euro/dollar pair continues to trade inside the side channel of 1.17-1.19, from which it has not been able to exit for almost two months. However, let's take a closer look at the most important event of this week.

The most important thing is what Powell said. 1) The US Economy, in his opinion, is recovering at a faster pace than the regulator expected. 2) The outlook for the US economy remains very dim due to the coronavirus pandemic and the complete uncertainty associated with it. It is from these two theses that we should start when analyzing everything that is happening. The second thesis does not raise any questions or doubts. It is clear even to a child that it is impossible to predict the scale of growth, decline, or recovery of the economy if the whole world is covered by an epidemic that has already killed about 200,000 people in America alone. It is impossible to predict when the vaccine will appear and how much longer the COVID-2019 virus will terrorize humanity and leave a negative imprint on the economy of each country. Tomorrow, the second or third "wave" may begin and any economy may start to decline again. Thus, Powell is right to say that the American economy will not fully recover until the virus is over and that the future of the economy is uncertain. However, the first thesis raises a lot of questions. In general, we can note that only the inflation indicator shows really good dynamics in the States. The latest report showed that inflation is holding steady at around 1.5%, which is not so bad for the biggest crisis in the last 100 years. The unemployment rate has also started to decline sharply recently, however, it remains quite high. Also, it is very difficult to judge the GDP now. We have data only for the second quarter, according to which the economy lost almost 32%. For example, if 20% of growth is recorded in the third quarter, will this be a good recovery rate or not? After all, we should not forget that the European economy lost only 12%, while the American economy lost 32%. It is logical to assume that the American one will recover longer and harder. Plus, in Europe, the situation with the "coronavirus" is much more favorable than in the United States. Thus, Powell's first thesis may be overly optimistic.

A few more important theses. First, the Fed said that rates will not be raised until the labor market is fully restored, which is the unemployment rate, not exceeding 3-3.5%. Also, inflation should be stable at 2% or slightly higher. Even if we calculate that the US economy is recovering at a high pace, then according to the most conservative estimates, the rate increase will not begin until 2022-2023. Thus, traders should not even be interested in such forecasts at this time. Does it matter for the euro/dollar exchange rate if the Fed plans to raise rates in 2 or 3 years?

Also, we remind you that not everything in America and its economy depends only on the Fed. For example, for a faster recovery, the US Congress has already allocated several trillion dollars during 2020. However, this money ran out relatively quickly and now the issue of providing a new aid package is still open on the agenda. This is a huge problem since Democrats and Republicans can't agree on the size of this package. Powell has previously stated that the support from the US government is of great importance to the economy. Therefore, it is logical to assume that without the help of Congress, the recovery will not be fast again. Moreover, Congress is now busy preparing for the 2020 presidential election.

Based on all of the above, we can conclude that the day before yesterday's meeting of the Fed was passable. Interesting information came to the markets, however, this is not the information that radically changes something. Thus, the ECB and the Fed failed to influence the euro/dollar pair and withdraw it from the 200-point side channel. 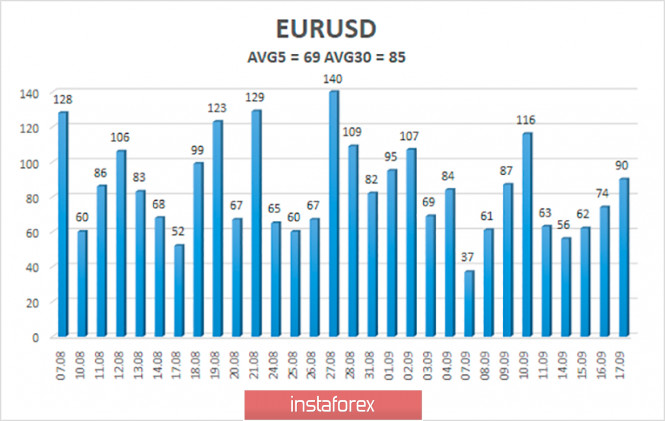 The volatility of the euro/dollar currency pair as of September 18 is 77 points and is characterized as "average". Thus, we expect the pair to move today between the levels of 1.1754 and 1.1892. A reversal of the Heiken Ashi indicator back downward signals a round of downward movement in the remaining side channel of $ 1.17 - $ 1.19.

The EUR/USD pair has fixed below the moving average line but continues to trade in an absolute flat. Thus, formally, we can now consider short positions with the goal of the volatility level of 1.1754, after the Heiken Ashi indicator turns downward. It is recommended to re-consider options for opening long positions if the pair is fixed back above the moving average with a target near the level of 1.1892.

Interesting? Write a comment below.
 #Overview of the EUR/USD pair. September 18. The Fed announced a direct correlation between monetary policy and the "coronavirus".
Forward 
Backward 