Overview of the EUR/USD pair. September 2. New factors of pressure on the dollar. For almost a whole month, the EUR/USD currency pair was trading in a fairly narrow price range, which could not be clearly called either a flat or an upward trend. However, it seems that now this period and segment is over, and the price has again rushed up. Most analysts have long agreed that the US currency, despite all the types of crises that have engulfed the United States at this time, is highly undervalued. Yes, there are enough problems in America right now, however, we should not forget that the rest of the world also suffered from the pandemic and the "coronavirus crisis". The growth of the European currency by 12 cents in three months shows everything as if a revolution has already taken place in the United States, and the economy has collapsed. Thus, we continue to believe that the US dollar has lost enough in recent months and a strong correction is still brewing. However, the problem is that everything will depend on large traders, who may have their own decision-making logic. For example, one of the big problems for the US currency at this time is the fall in the yield of US government bonds. What does this mean in practice? Many countries (for example, China), many large investors, companies and banks prefer to keep their capital in the securities of stable states and strong economies. Thus, the fall in the yield of these very securities causes a drop in their attractiveness as an investment tool for international investors. Demand is falling, securities are sold, new ones are not placed, and accordingly, the demand for the US dollar is falling on the international market, since it is no longer needed in such quantities to buy new securities. Thus, in addition to the "four types of crisis" and the impending fifth, the United States now faces another new problem that may negatively affect the exchange rate of its national currency. The most interesting thing is that what is happening at this time is absolutely in the hands of Donald Trump. We are referring to the fall in the dollar. Recall that from the very beginning of his reign, Trump dreamed of a "cheap" dollar in order to more easily service the national debt and help national exporters. And now, at the end of his presidential term, when the national debt has grown to an unimaginable $ 30 trillion, inflated by several trillion dollars in just a year and may well continue to grow further, Trump's dream has come true. Will it help him in his desire and intention to be re-elected for a second term?

In addition to the fall in US Treasury yields, the Fed has made various speeches over the past few days. It all started last Thursday with Jerome Powell, who did not say anything optimistic. He only said that now inflation in America will be allowed to grow above 2%. Everything would be fine, however, this level of inflation in the United States has not been seen for a long time. Thus, the decision to abandon targeting inflation at 2% is about the same as the statement: "We will tighten monetary policy as soon as GDP returns to pre-crisis levels and we can completely defeat the pandemic." It is obvious that in solving these two problems, it will be possible to tighten monetary policy, but when will this happen? At least in a few years. So it is with inflation. The fact that the Fed will now allow it to grow to 3% does not mean anything concrete. All the same, as before, the FOMC will decide whether to tighten monetary policy at this time or not. The performances at the beginning of the week by Raphael Bostic and Richard Clarida were overrated. In fact, the heads of the Atlanta-Fed and Deputy Jerome Powell also did not tell the markets anything super interesting. Clarida said that the Fed is not going to raise the key rate just because the unemployment rate has started to fall, but also does not intend to introduce negative interest rates, and also doubts the effectiveness of controlling the yield curve of government bonds. On the contrary, Raphael Bostic touched upon the topic of coronavirus in his speech, noting that high levels of morbidity in the United States slow down the economic recovery and create additional risks. Which of this information was not previously known to the markets? Thus, we believe that the fall in the US currency in the last few days is not directly related to the speeches of the Fed representatives. Most likely, their rhetoric only added to the overall unattractive picture of the current state of the US economy and its prospects for the coming months and years. Naturally, the factor of hopelessness of the American economy has further lowered the demand for the dollar and American government securities. It should also be recalled that mass rallies and protests continue in the States related to a new incident between the police and a black man, which ended with the shooting and serious injury of the latter. At least this time the whole country was not engulfed in mass riots.

Meanwhile, the total number of recorded cases of "coronavirus" in the United States has exceeded 6 million. However, don't let this figure be misleading. It does not reflect the number of people who are currently being treated, but the total number of cases since the beginning of the pandemic for 6 months. Second, there has been a reduction in the number of new infections in recent weeks (according to data from Johns Hopkins University). For example, on August 30 and 31, 35 and 33 thousand people were infected in the country, which is twice lower than the values that were observed a month ago. Unfortunately, this factor does not yet provide any support to the US currency.

Meanwhile, Donald Trump continues his election campaign, which is reduced to calling on his supporters to chant "Trump for another 12 years" and criticizing his main opponent, Joe Biden. This time, Trump said that "Biden is a very weak person and is controlled like a puppet." "If the radical left forces win, they will take control of your cities, it will be a real revolution," the current US President believes. Trump was also asked what kind of people controlling Biden is he talking about? "People you've never heard of. People who are in the shadows. People who control the protests in the streets," the American President responded, who never provides proof of his words. 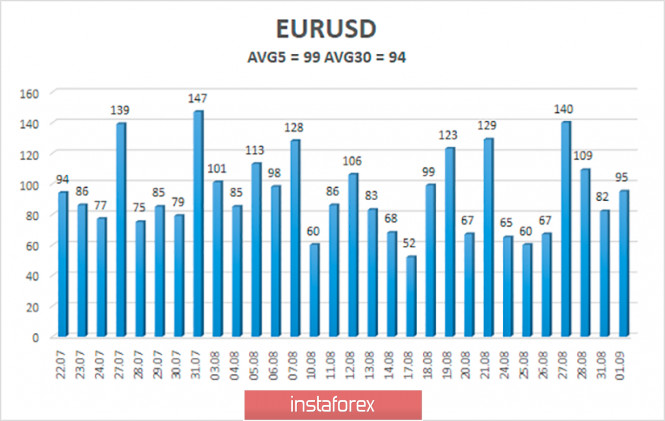 The volatility of the euro/dollar currency pair as of September 2 is 99 points and is characterized as "high". Thus, we expect the pair to move today between the levels of 1.1824 and 1.2022. A reversal of the Heiken Ashi indicator to the top signals a possible resumption of the upward movement, as well as a rebound of the price from the moving average line.

The EUR/USD pair started a downward correction. Thus, today you can continue to trade for an increase with the goals of 1.1963 and 1.2022, if the Heiken Ashi indicator turns upward or a rebound from the moving is performed. If the price is fixed below the moving average, it is recommended to trade lower with the goals of the Murray levels "5/8" and "4/8"-1.1841 and 1.1719.

Interesting? Write a comment below.
 #Overview of the EUR/USD pair. September 2. New factors of pressure on the dollar.
Forward 
Backward 