Overview of the EUR/USD pair. September 21. The assassination attempt on Donald Trump. 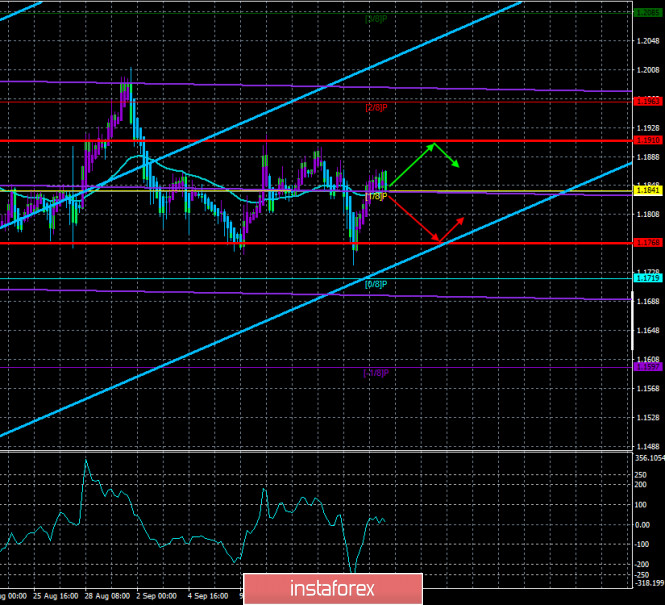 A new trading week begins on the Forex currency market and this can become "one of" a whole series of weeks in which the euro/dollar pair is trading in a frank flat. As we have repeatedly noted, it is very inconvenient to trade any instrument in a sideways movement. On the one hand, the quotes do not go beyond the designated range, thus, you can almost always expect the price to return to the original position if the transaction was opened incorrectly. On the other hand, it is always more convenient to trade on the trend, and not when the pair is "stormy" and every day we see a "swing". Thus, the pair starts the new week in the same flat that it has been in for almost two months, and traders can only hope that it will end this week. As a rule, any pair needs a good reason to change direction. A striking example of this is the pound sterling, which has fallen by 700 points since September 1 due to news of a new bill by Boris Johnson that violates previously reached agreements with the EU. Something similar is needed for the euro/dollar pair to leave the range of 1.17-1.19. Most likely, "something like this" should be expected from America, where the rapid news flow continues to flow almost non-stop. Everything is quiet and peaceful in the European Union.

Meanwhile, nothing optimistic is happening in the States. The coronavirus continues to rage, with approximately 40,000 new cases reported daily. Donald Trump again stopped the "coronavirus briefings" and now only makes statements from time to time about the creation of a vaccine in the very near future, as well as about the beginning of vaccination of the population in October. Naturally, these statements of Trump are immediately criticized by many doctors, epidemiologists, and virologists, who continue to insist that creating a vaccine against a new virus requires a very long time – consuming process that can take from a year to two. Thus, even if a vaccine will be created before the end of 2020 (assuming that it passed all necessary clinical tests and is proven safe and effective for all segments of the population), in mass production, it will arrive no earlier than 2021, and the number of required doses will be created until mid-2021. It should be understood that about 330 million people live in the United States alone. Accordingly, it is necessary to create about 330 million doses of the vaccine. Not to mention export doses, since pharmaceutical companies that invent the vaccine will want to make money in other countries. Thus, we believe that the process of gradual vaccination of humanity should not be expected before the middle of 2021. However, Donald Trump can't wait until mid-2021. He needs to create the appearance of starting the vaccination process before November 3, 2020, when elections will be held in America. And all the processes in the country are now going through the prism of future elections. And the US dollar remains an outsider because of all this.

Meanwhile, it became known that last week, someone tried to poison Donald Trump. Unknown attackers sent a package to the White House that contained the poison ricin. The parcel was intercepted by the security services, conducted several tests, and confirmed that the substance contained in it is indeed poison ricin. Also, a new scandal is brewing in the White House, which is related to the possible dismissal of the head of the FBI, Christopher Wray. The Director of the Federal Bureau of Investigation published a report saying that the main threat to the US presidential election is Russia and various right-wing groups. The report did not say anything about China and left-wing groups, which did not please Donald Trump, who benefits from considering China to be the culprit of all the troubles. Moreover, Trump believes that China supports Joe Biden in the election. Consequently, China is also interfering in the presidential election. According to Trump, "China should be at the very top of the list of threats to America." In general, the report of the FBI Director simply did not meet Trump's expectations, thus, Christopher Wray can now be fired.

Meanwhile, recent opinion polls and surveys have shown that there is no reduction in the gap between Donald Trump and Joe Biden. Recall that in the last two weeks, some opinion polls showed that Trump has reduced the gap in political ratings to almost 5%. So in fact, the gap is still about 10% and has not significantly decreased or changed at all over the past two months. We have already questioned this information (that Trump is catching up with Biden) since nothing has happened in recent months that could increase Trump's ratings and lower Biden's ratings. So now Joe Biden just needs to not lose his advantage, which he formed a month and a half before the election.

As for macroeconomic events and reports, nothing interesting is planned for the first trading day of the week. Some news calendars include a speech by Jerome Powell, so some information may still fall into the hands of traders at the beginning of the week. However, we strongly doubt that Powell will tell the markets something important that has not yet been reported after the end of the Fed meeting last week. Thus, the activity of the markets on Monday will directly depend on what the head of the Fed will report.

From a technical point of view, the pair continues to trade not even between the levels of 1.17 and 1.19, but between the volatility levels of 1.1768 and 1.1910. Thus, fixing the price above the moving average can be used to open very short-term long positions. 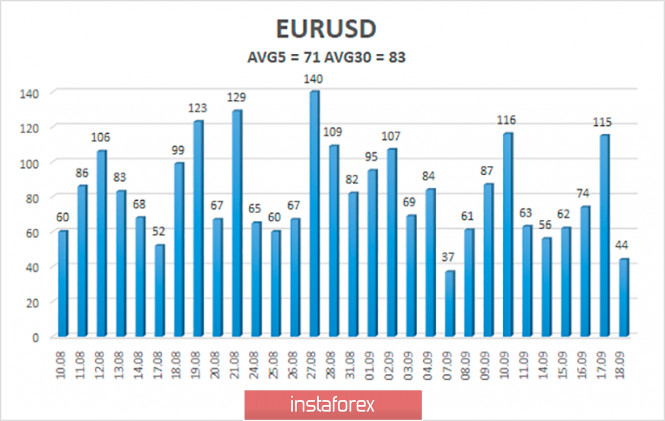 The volatility of the euro/dollar currency pair as of September 21 is 71 points and is characterized as "average". Thus, we expect the pair to move today between the levels of 1.1768 and 1.1910. The reversal of the Heiken Ashi indicator back up signals a round of upward movement in the remaining side channel of $ 1.17 - $ 1.19.

The EUR/USD pair has fixed above the moving average line but continues to trade in an absolute flat. Thus, formally, we can now consider long positions with the goal of the volatility level of 1.1910, after the reversal of the Heiken Ashi indicator to the top. It is recommended to re-consider options for opening short positions if the pair is fixed back below the moving average with a target near the level of 1.1768.