Overview of the EUR/USD pair. September 22. Christine Lagarde is worried about the high euro. The ECB is going to study the 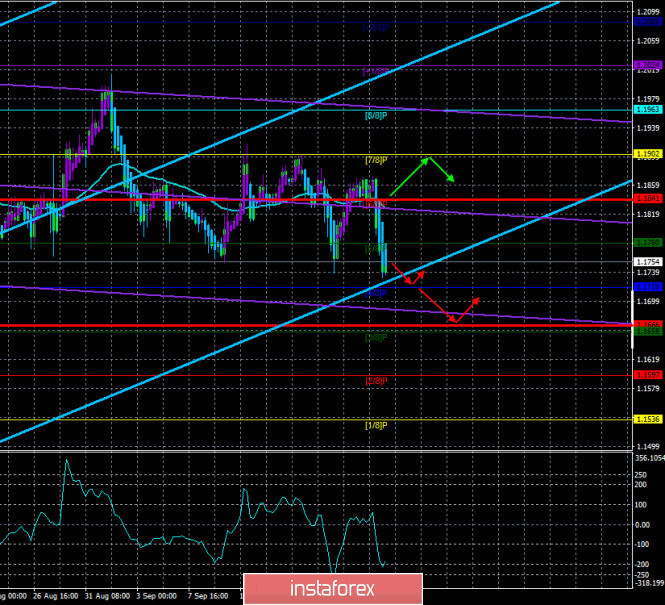 The EUR/USD pair spent the first trading day in fairly active trading, which is not typical for Mondays. The US currency began to strengthen almost in the morning and rose by almost 150 points against the euro during the day. It is still quite difficult to say what caused such a strong growth of the US currency. There is no news about the speech of Fed Chairman Jerome Powell at the moment. This was the only macroeconomic event on Monday. Thus, the euro/dollar pair simply collapsed and at the same time remained inside the side channel of $ 1.17- $ 1.19, which we have been writing about for almost two months. Thus, from a technical point of view, the situation in the foreign exchange market has not changed completely. Further, the currency pair can already turn up today and start an upward movement inside the same side channel to its upper line of 1.1900. The most important thing is that the general fundamental background does not change for the pair. In America, things are still very bad. This applies to both the political and epidemiological crisis. Fortunately, they managed to solve the problems of the social crisis (mass protests and rallies after two cases of racism by white American police officers), however, the economic crisis did not go away. In general, the situation in America has not improved much in recent weeks.

In the European Union, everything is much quieter and calmer. In recent weeks, we can only highlight the meeting of the European Central Bank, however, no important decisions have been made, and no important theses were voiced. However, it is well known that the ECB is very afraid of the current high exchange rate of the European currency. This was first mentioned a few weeks ago by the bank's chief economist, Philip Lane. Nothing has changed since then. Now Christine Lagarde is also talking about the euro exchange rate. "It is clear that the strengthening of the euro plays a significant role in various areas, and as for monetary policy, it puts downward pressure on the price level," Lagarde said. "We are very attentive to the growth of the euro and take this factor into account when determining monetary policy," the head of the ECB added.

At the same time, it was reported that the ECB is going to study the economic consequences of the emergency economic assistance program PEPP (Pandemic Emergency Purchase Program) to re-evaluate its validity. The European regulator admits that some parameters of the PEPP program may be transferred to other programs to stimulate the economy. The debate is expected to take place inside the ECB next month.

There was also some news from the White House on Monday. Donald Trump again talked about creating a vaccine and, according to him, "it will be ready long before the end of the year, maybe even by the end of October". The US President believes that Pfizer's vaccine, which is closest to the end of clinical trials, will be the first to be released. The US President also said that he gives an "excellent" rating for his administration's response to the "coronavirus", despite 200,000 deaths from this disease in the US. "We did a phenomenal job, not just a good job, but a phenomenal job. Except for public relations, because there is fake news," Trump said.

At the same time, in the run-up to the presidential election, many experts continue to evaluate the four years of Donald Trump's presidency. One of the main achievements of Trump (the rise of the economy, the labor market) was easily leveled by the "coronavirus". The second major achievement (agreeing to a trade deal with China) is just a beautiful piece of paper. You don't need to be a serious analyst to see a direct and simple relationship. During the entire administration of Donald Trump, the US trade deficit has only increased. In other words, it doesn't matter what deal was signed with Beijing. The trade deficit is still increasing. However, China's trade balance is positive (who would doubt it). Further, it has only increased over the past 4 years. That is, in fact, Trump only hurt himself in the trade war with China. At least, he did not manage to achieve any positive results. Besides, the level of public debt has also increased.

It also became known about new social surveys and studies that are conducted in the States by everyone who is not lazy. According to them, Biden is still ahead of Trump by 8-10%. It is worth noting that any poll has a certain margin of error. Therefore, 8% in practice can be 10%. Thus, most studies suggest that the situation has not changed at all over the past few months.

As a result, we have the same technical picture as before. The euro/dollar pair continues to trade in a 200-point wide side channel. Even a fairly serious drop in quotes today does not change the essence of the matter at all. The fundamental background also remains the same. Even the Fed and ECB meetings, as well as the speeches of Jerome Powell and Christine Lagarde, could not change it. Because in principle, everything remains the same as it was in the last six months. In the first place in terms of significance, the "coronavirus" epidemic continues to stand. The second "wave" has already officially started in Spain, France, and the UK. This applies to European countries. In America, the first wave did not end yet. Thus, the economies of the European Union and the United States are recovering to the extent of their capabilities, however, there is no question of full recovery before the complete victory over the coronavirus. Thus, with the arrival of the cold season, the whole world may face a new round of the pandemic. The epidemic can be tougher and stronger, and whatever it is, it is obvious that this time it will leave its mark on the economy of every country in the world. And in the States, meanwhile, everyone continues to prepare for the elections. This is probably an even more significant topic across the ocean than the "coronavirus", which everyone has somehow forgotten about recently. 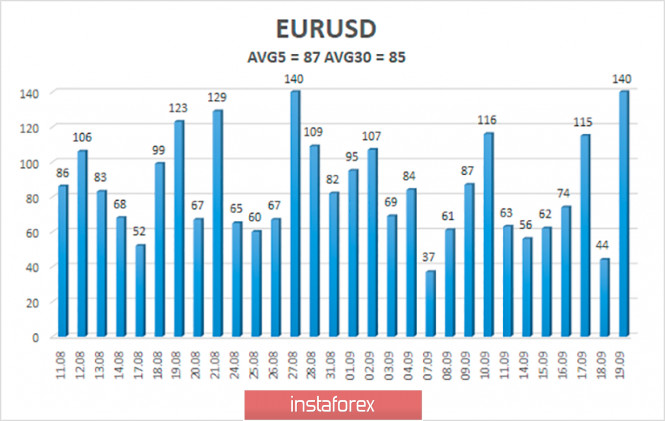 The volatility of the euro/dollar currency pair as of September 22 is 87 points and is characterized as "average". Thus, we expect the pair to move today between the levels of 1.1666 and 1.1841. A reversal of the Heiken Ashi indicator back up signals a round of upward movement in the remaining side channel of $ 1.17 - $ 1.19.

The EUR/USD pair is fixed below the moving average line but continues to trade in the side channel. Thus, formally, we can now consider short positions with targets of 1.1719 and 1.1666 and keep them open until the Heiken Ashi indicator turns upward. It is recommended to re-consider options for opening long positions if the pair is fixed above the moving average with a target of about 1.1902.

Interesting? Write a comment below.
 #Overview of the EUR/USD pair. September 22. Christine Lagarde is worried about the high euro. The ECB is going to study the
Forward 
Backward 