Overview of the EUR/USD pair. September 23. Joe Biden's victory will lead to a change in US trade policy. 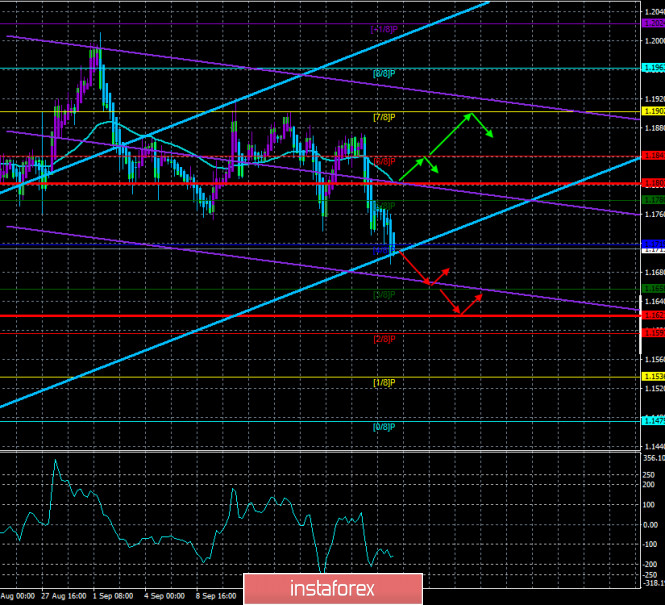 The EUR/USD pair continued its downward movement for the second trading day, although the pair's quotes are located near the lower border of the side channel of 1.17-1.19, where it is more logical to consider long positions. However, market participants decided otherwise. In any case, the flat should end sooner or later. Why not now? We are not saying that it has already been completed, however, the fall in the euro currency quotes should not cause too much surprise either. Recall that after the European currency rose by 1300 points, which caused almost a panic in the ranks of the European Central Bank, there was no normal correction. All the traders managed to do was lower the pair by 200 points, which is very small to be called a "correction". Moreover, the euro/dollar pair has been trading in a 200-point sideways range for two months, thus, it is too early to talk about the end of the flat because the pair is declining for the second day in a row.

Meanwhile, the "battle for the seat" continues in the States. We are talking about the presidential election, which will be held on November 3. We have repeatedly written about this event, stating that this event is now the most important and significant for the country and the dollar. This is not an event that can have a momentary impact on the movement of the US currency. However, for a long-term perspective, it is of great importance. In the last two trading days, the US currency has become more expensive, but if the flow of negative news resumes from overseas, the dollar's strengthening may be very short. In the meantime, Donald Trump and Joe Biden continue to mutually insult each other, believing that this will somehow increase their chances of winning in a month and a half. We have repeatedly conducted an analysis, during which it became clear that the upcoming elections will be one of the most interesting in the history of the United States. Neither Trump nor Biden will accept defeat, thus, there will probably be "foul play" and various "tricks", after which the fight for the president's seat can safely move to the courts.

Meanwhile, the democratic presidential candidate Biden said that the States suffered from the "coronavirus" more than other countries in the world because the current president did not take all the necessary measures. According to Biden, Donald Trump failed to keep his cool at an extremely important moment for a multi-million-strong country, which caused the loss of more than 200,000 human lives. However, this is far from the end, because, despite all Trump's promises to create a vaccine in the near future, the real vaccination of the population will begin at the beginning of next year. And in America, about 40,000 people are infected with the "coronavirus" every day. "All his life, Donald Trump has been running from the problems he faced. In light of this crisis, when it took the president to play a leading role, he failed, and all of America paid the price," Biden told supporters in Wisconsin. "More than 200,000 people have died in the past six months. So many lives have been lost because the only thing the president cares about is the stock markets and the election," Biden added. Joe Biden also calls the US president a "fool" who "does stupid things and shows false masculinity". To this insinuation, Trump responded as follows: "Look at sleepy Joe, how did he handle the swine flu? It was a failure, a nightmare." However, Trump did not say what exactly was the "failure" and "nightmare". Therefore, his accusations against Biden do look rather weak. Especially because Biden was not president at the time, which means that he can not be blamed completely for any events taking place in the United States when he was Vice President under Barack Obama.

Meanwhile, many US trade partners are counting on Joe Biden to win the election. They are counting on him because they hope for a change in US trade policy. According to sources close to Biden, it is unlikely to expect strong changes, however, it may become softer and more consistent. Although Biden also promises to reduce US dependence on China, he may still be more lenient in negotiations and strike a fairer deal that ends the trade war that is negatively affecting both the US and Chinese economies, as well as the global economy. By the way, a change in trade strategy would be in the hands of the States themselves. As we have said several times, the trade deficit has only increased under Donald Trump. Thus, it doesn't matter what deal was made with China or how much the trade deficit with that country has shrunk. In fact: the overall trade balance for America continues to shrink. If something doesn't work as expected, then you need to change your strategy. Trump can't provide a new strategy, however, Biden can. Joe Biden promises to use a wider range of tools in his trade policy. In general, Biden's proposals are in many ways similar to Trump, however, they are more loyal, which means they have a better chance of positive implementation. Because we once again remind you that negotiations are always at least two countries. While Washington can negotiate with weak and small countries from a position of strength, it cannot do so with Russia and China. Biden understands this and Trump doesn't.

Thus, we believe that if Joe Biden wins the election, the demand for the US dollar will automatically grow. Simply because it will mean the end of the war with American manufacturers, whose production has been operating for years in China, Taiwan, and other countries with cheap labor, as well as the possible end of the trade war with China, which is almost openly supporting the democratic candidate. As for the near-term perspective, until the euro/dollar pair leaves the channel of 1.17-1.19, there is no need to talk about any trend movement. Near the Murray level of "4/8" - 1.1719, an upward turn may occur and a new round of upward movement will begin inside the same side channel. 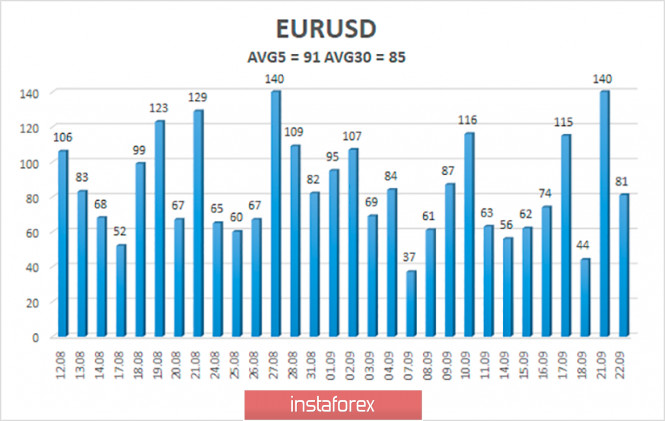 The volatility of the euro/dollar currency pair as of September 23 is 91 points and is characterized as "average". Thus, we expect the pair to move today between the levels of 1.1621 and 1.1803. The reversal of the Heiken Ashi indicator back upward signals a round of upward movement in the remaining side channel of $ 1.17 - $ 1.19.

The EUR/USD pair is fixed below the moving average line but remains in the side channel. Thus, formally, you can now hold short positions with targets of 1.1658 and 1.1621 until the Heiken Ashi indicator turns upward. It is recommended to re-consider options for opening long positions if the pair is fixed above the moving average with the first targets of 1.1841 and 1.1902.

Interesting? Write a comment below.
 #Overview of the EUR/USD pair. September 23. Joe Biden's victory will lead to a change in US trade policy.
Forward 
Backward 