Overview of the EUR/USD pair. September 24. The battle for the Supreme Court between Democrats and Republicans has begun. 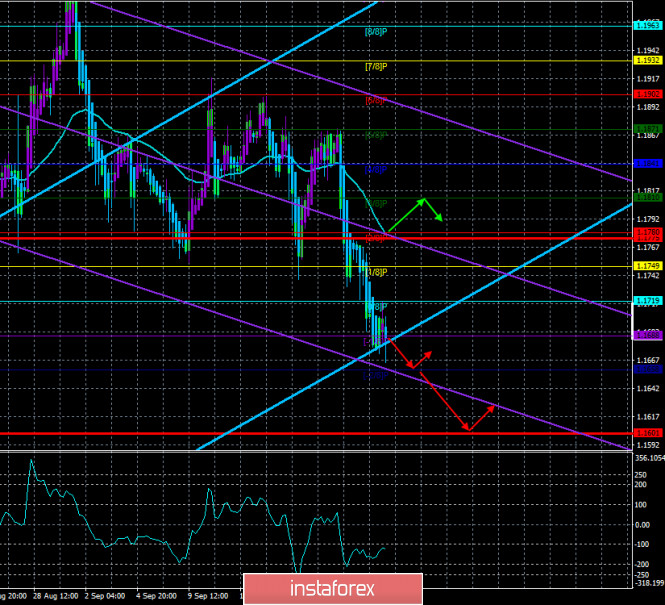 On the third trading day, the EUR/USD pair continued its downward movement, as indicated by the Heiken Ashi indicator. The pair has fallen below the $ 1.17- $ 1.19 side channel, however, it can't continue its steady downward movement yet. Thus, there is a high probability that the lateral movement is completed. You can trade for a decrease, taking into account the readings of the Heiken Ashi indicator. At the same time, we recommend that you be cautious about buying the US currency, as there are still very few fundamental growth factors.

All the latest news for the US currency was related exclusively to the speeches of Jerome Powell and Steven Mnuchin in the US Congress. We've already talked about this, and Jerome Powell will be speaking three times before three congressional committees this week. Most likely, each of his next speech will differ little from the previous one. Further, in his first speech, he did not tell the markets anything fundamentally important. According to Powell, the economy is recovering at a good pace, however, additional funds are still needed to provide financial assistance to the sectors most affected by the pandemic. Powell also believes that the recovery of the American economy will depend on the success of the US government in the fight against the "coronavirus". Steven Mnuchin supports his colleague and predicted that the US economy will grow significantly in the third quarter. "The recovery is proceeding at a steady pace because the President's administration and Congress worked together to agree on the largest economic aid package in American history. The Fed also played an important role in the recovery, providing 13 unique credit mechanisms to economic entities." According to Steven Mnuchin, Congress and the presidential administration continue to negotiate the fourth package of financial assistance. "Full recovery will occur when people are confident that it is safe to return to various activities. Further economic growth will depend on when the virus is brought under control, as well as on the political actions taken by the government," said Jerome Powell. However, the country's top two financiers believe that the economy needs new monetary incentives, and also consider the risks of a pandemic high. From our point of view, these are all negative factors and news for the US currency. It was obvious that the economy would recover with the cancellation of lockdown. In all countries of the world that managed to suppress the pandemic (at least temporarily) and that lifted the "strict" quarantine measures, there is a recovery. The main questions are how fast the economy is recovering (and it is not the subjective opinion of Powell or Mnuchin that is important here, but specific figures) and how strong the impact of the next waves of the coronavirus epidemic will be on the economy.

In addition to talking about the economy and monetary policy, Steven Mnuchin touched on the topic of unemployment, saying that since April, almost 11 million jobs have been restored - that is, about half. At the same time, the debate continues between Democrats and Republicans about the size of the new stimulus package and also about the judicial appointment to the US Supreme Court after the death of Ruth Ginsburg. Media reports that Donald Trump, along with the leader of the Republican majority in the Senate, Senator Mitch McConnell, wants to appoint a new judge to the vacant seat before the November 3 election. Thus, Republicans will be able to count on 5 or 6 votes out of 9 possible in the event of disputes that may reach the Supreme Court. According to current US law, the US Senate, in which the majority of votes belongs to Republicans, must approve the candidacy of a new judge. Thus, most likely, a Trump judge will be appointed, and the advantage in the main judicial body of the country will be obtained.

Further, this will be a huge advantage for Trump before the upcoming elections. The fact is that many American media and experts have almost no doubt that immediately after the election, both presidential candidates will appeal to the Supreme Court, expressing their disagreement with the results. More precisely, only the loser is likely to go to court. Since there is a 70-80% probability that it will be Donald Trump, it is the current US President who needs the support of the Supreme judges. Moreover, this is not an ephemeral or hypothetical assumption. In 2000, the late Hen Ginsburg allowed a recount in the state of Florida. And then this recount brought victory to Republican George W. Bush. Thus, even a recount of votes in a single state can cost a candidate a victory.

Democrats are still strongly opposed to the appointment of a new judge, accusing Senator Mitch McConnell of hypocrisy since he was against a similar appointment of a new judge before the presidential election in 2016. Then the initiative came from Democrat Barack Obama. McConnell personally said at the time that it was inappropriate to appoint a judge in an election year. Joe Biden himself addressed Republican senators: "We need to de-escalate the conflict, not escalate it. Listen to your conscience and don't vote to approve any candidate in the circumstances that President Trump and Senator McConnell created." Thus, in the near future, we will find out whether the US Senate will meet Biden halfway. If not, Trump will indeed have a powerful weapon against Joe Biden in the election. Trump will be able to initiate a recount in any state or several at once. Thus, Biden will need a clear victory by a large margin. Recall that at the moment, according to the latest opinion polls and research, Biden is ahead of Trump by at least 8%. In several "swing states," Joe Biden is the leader. However, in North Carolina, Florida, and several other states, its advantage is minimal.

We believe that the victory or growing probability of Donald Trump winning the election is a bearish factor for the US currency. We believe that the absolute majority of Americans understand that the current government has failed to cope with international politics, the coronavirus epidemic, and mass rallies and protests. Thus, a change of power will be the most reasonable scenario for the United States. But power is a thing that no one gives up voluntarily and easily. Therefore, there is no doubt that Trump will fight to the last. Plus, we remind you that it was Trump who repeatedly stated that he needed a "cheap" dollar. Therefore, for the US dollar, President Trump is almost in any case dangerous. 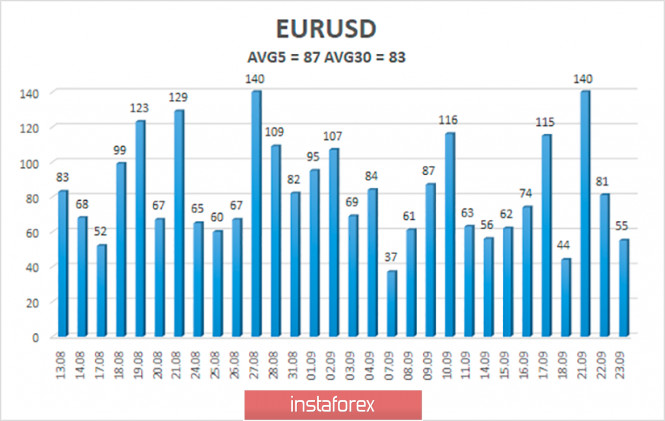 The volatility of the euro/dollar currency pair as of September 24 is 87 points and is characterized as "average". Thus, we expect the pair to move between the levels of 1.1601 and 1.1775 today. A reversal of the Heiken Ashi indicator back upward signals a round of upward correction.

The EUR/USD pair continues its downward movement and overcome the side channel. Thus, now you can continue to hold short positions with targets of 1.1658 and 1.1601 until the Heiken Ashi indicator turns upward. It is recommended to re-consider options for opening long positions if the pair is fixed above the moving average with the first targets of 1.1810 and 1.1841.

Interesting? Write a comment below.
 #Overview of the EUR/USD pair. September 24. The battle for the Supreme Court between Democrats and Republicans has begun.
Forward 
Backward 