Overview of the EUR/USD pair. September 28. A chess game between Donald Trump and Joseph Biden with the main prize – the 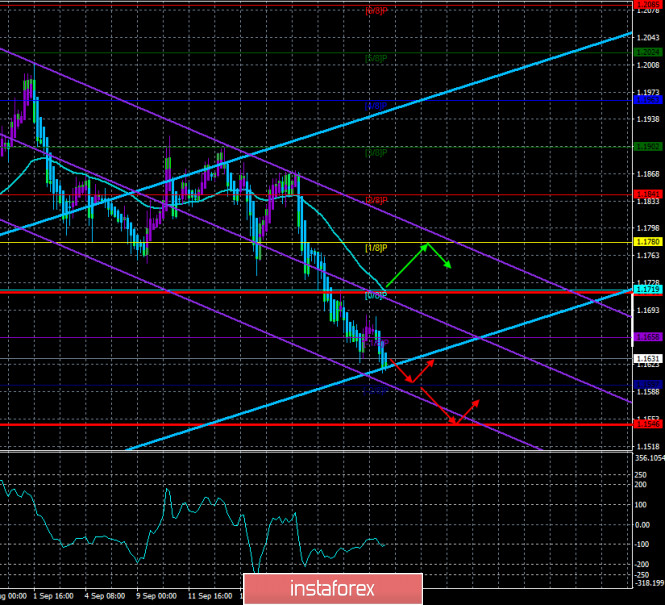 On the last trading day of last week, the EUR/USD pair continued to trade with a downward bias. Thus, the overall trend for the instrument does not change. The downward trend persists after a two-month movement in the 200-point side channel. However, as we have said many times, the prospects for the US dollar remain very vague, especially when paired with the European currency. With the pound sterling – everything is clear. This currency is an absolute outsider for the last four years. However, the European economy does not look problem-free, but rather stable. The only serious concern is inflation. In the United States, there are still many more problems in both economic, epidemiological, and political. We have already listed them several times. By and large, nothing changes in the fundamental background from overseas, thus, we continue to insist that the main reasons for the further fall in the pair's quotes can only be technical.

Most of the news from America continues to concern the topic of the election and Donald Trump personally. For example, the current US President in an interview last week said that he does not even expect any process of transferring power to Joe Biden, because, in his opinion, "he will win the election". "We will only lose the election if the Democrats cheat. We can't let them do this, because our country is at stake. These people will destroy our country, we can't let that happen. This is a scam, they know it, and the media knows what will happen," said Donald Trump. It is unclear how Trump and his team will be able to convict the Democrats of fraud. However, this is the most alarming moment. No one will forbid Trump to say something like "the Democrats rigged the election, they forged a lot of ballots, we have evidence, we will present it in a week" and file with the Supreme Court. Naturally, as in the case of the accusations against China, no evidence will be presented "in the near future". But at the time, both Mike Pompeo and Donald Trump have repeatedly stated that the evidence will be made public in the coming weeks. The same can happen with elections and accusations against Democrats. And most American journalists and experts have little doubt that this is exactly what will happen. Accusations are one of Trump's favorite weapons. Also, Trump has already begun to accuse the Democrats that all "his votes" will be counted within a day, but all those who will vote by mail (that is, for Biden) can be counted within weeks or even months. It is unknown why Trump believes that all of his voters will vote in person and all of Biden's voters will vote by mail. The current US President also believes that this is the calculation of the Democrats. The number of votes they received will be known in a day. Thus, the Democrats can fake all-new ballots.

Thus, the situation with the elections looks like this now. Biden and his entourage are afraid that against the background of the "coronavirus", Trump and the company may prevent voters from voting in many "Biden" states and cities. This is what mail-in voting was designed for so that every Biden voter could cast their vote for the Democrat without hindrance. Again, under the cover of the "coronavirus". Trump is afraid that Biden's people will simply cheat the necessary number of votes by using fake ballots. Thus, as we've said before, it's likely that the election results will be challenged in the US Supreme Court, no matter who wins them. And with this development, we are not ready to say that Trump is 70-80% likely to lose the election. The problem is that if the case is decided in the US Supreme Court, then Trump already has the support (according to various estimates) of 4-5 judges out of 9. In the near future, Trump wants to appoint another judge to replace the untimely Ruth Ginsburg. Most likely, he will be able to do this, because no legal grounds are prohibiting him from doing so. On the contrary, the law prescribes the appointment of judges if the situation so requires. A candidate has already been selected to replace the deceased Ginsburg, who did not support Trump's policies. Trump offers Amy Coney Barrett, who was previously appointed by him to the Chicago District Court of Appeals. It doesn't even matter who Trump chooses. Thus, it remains only to wait for the approval of the candidate by the US Senate, the majority of which are Republicans.

Thus, almost everything related to politics and power in America now passes through the prism of elections. Even the situation with the "coronavirus", Democrats and Republicans are trying to use against each other. For example, Joe Biden says that all the President's demagoguery is connected only with the desire to distract the attention of Americans from the real problems, from the epidemic that persists at high levels and from the high level of unemployment. Trump also says that the Democrats are trying to "delay" the process of creating a vaccine. Thus, we will witness another 5-week series called "elections".

Well, for the euro/dollar pair, this means only one thing. In the near future, the US dollar may start falling again. The reasons are extremely fundamental. Investors and traders are now afraid to deal with the US economy and the US currency because their future is uncertain. Thus, the euro now looks more stable currency. Perhaps, after the election results are known, the US currency will again be in demand, however, we do not want to get ahead of ourselves so far. No one knows what will happen after November 3. 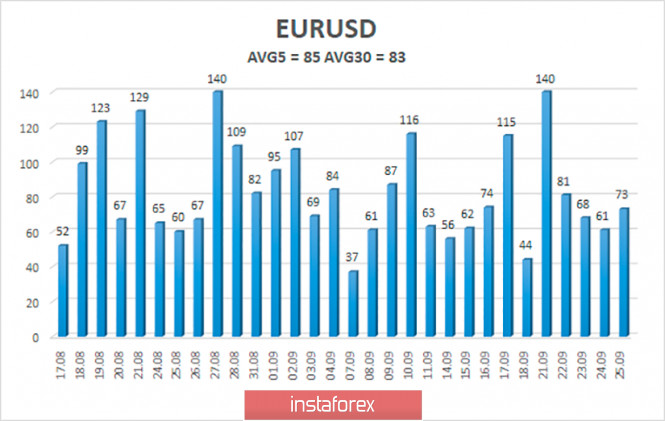 The volatility of the euro/dollar currency pair as of September 28 is 85 points and is characterized as "average". Thus, we expect the pair to move today between the levels of 1.1546 and 1.1716. A reversal of the Heiken Ashi indicator upward signals a new round of upward correction.

The EUR/USD pair continues its downward movement. Thus, now you can continue to hold open short positions with targets of 1.1597 and 1.1546 until the Heiken Ashi indicator turns up. It is recommended to re-consider options for opening long positions if the pair is fixed above the moving average with the first targets of 1.1780 and 1.1841.

Interesting? Write a comment below.
 #Overview of the EUR/USD pair. September 28. A chess game between Donald Trump and Joseph Biden with the main prize – the
Forward 
Backward 