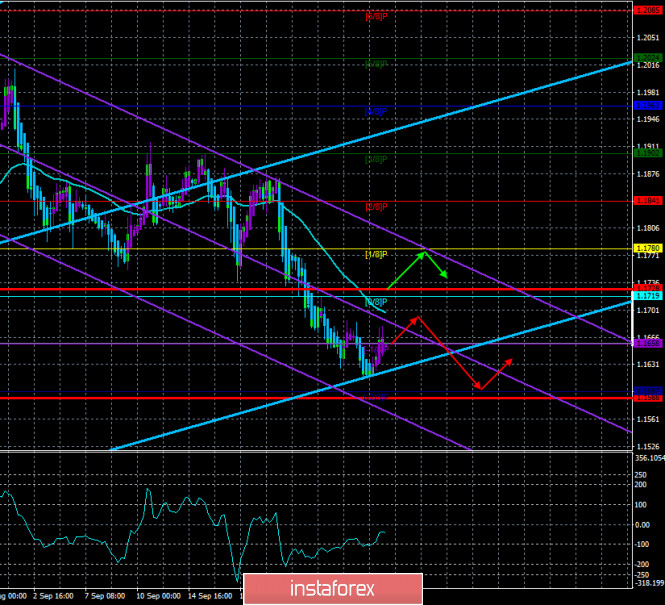 The European currency paired with the US dollar began to adjust on the first trading day of the week. The growth was quite confident, thus, we can even assume that the downward movement is complete. Recall that there were no fundamental reasons for the strengthening of the US currency. There are no improvements in the epidemiological situation, no easing of tension in the political sphere, and no fundamental improvements in the economy. In the economy, we can say that everything is going according to plan. The economy is recovering from the "coronavirus crisis", which cannot even be considered complete yet. The epidemic persists and, first of all, this applies to the States that retain the world's leadership in the number of deaths from this disease and the number of diseases themselves. Thus, we continue to insist that the only reason for the dollar's growth in recent weeks is technical. After the pair grew by 1300 points, traders had to correct it. Further, it took traders more than two months to do this. Thus, from our point of view, the US currency may well resume falling in the near future.

Unfortunately, there is still no positive or optimistic news from overseas. On Monday, it became known that Steven Mnuchin and Nancy Pelosi (both Democrats and Republicans) are willing to sit at the negotiating table to still agree with a package of economic assistance to the most affected sectors of the economy and segments of the US population. It seems to be optimistic news, however, Nancy Pelosi immediately announced that her party is preparing a new proposal for $ 2.4 trillion. What's the point if previous similar-sized proposals have already been rejected by Republicans as too costly? Nevertheless, both prominent politicians are preparing to discuss something again, although we believe that all this is no longer important. On the eve of the presidential election (5 weeks left), Democrats and Republicans will not cooperate. They need to put the opposing candidate in the most unsightly light. Therefore, the Democrats are unlikely to reduce the amount of aid offered (they need to make Trump look like a miser who does not understand the seriousness of the "coronavirus" and its consequences for the economy). Also, Trump and his party will not meet the Democrats halfway, since the initiative of a large aid package belongs to them, respectively, it is Biden's political ratings that can grow due to the approval of the economic stimulus package.

Also, interesting details from the life of each of the candidates for the post of President-2020 continue to emerge. For example, the New York Times found out that Donald Trump has not paid income tax for 10 years, after getting to his tax returns. It turned out that hundreds of companies that are united in one business empire, 10 of the 15 years before Trump became president, worked at a loss. The article reports that Trump paid $ 750 in income tax in 2016 and the same amount in 2017. At the same time, the publication reports that in 2018 alone, Trump received income of about $ 600 million for participating in a reality show, for permission to use his name, and through investments in two buildings. Thus, the US President had to pay about $ 100 million in taxes. "This equation is a key element of the alchemy of Trump's finances: using the proceeds of his fame to buy and support risky businesses, and then using their losses to avoid taxes," the authors note. Trump himself, of course, called the article "fake" and said that "he paid a lot of taxes to the state of New York". Donald also promised to submit his tax returns as soon as the audit of his accounting, which has been going on for several years, is over. Moreover, the US President has requested and received income tax refunds of $ 73 million since 2010.

Meanwhile, the entire country is frozen in anticipation of another reality show – the Trump-Biden debate. The first round will be held today (September 29) in Cleveland. It will be followed by two more rounds. The Commission on Presidential Debates announced that both candidates for the post will have to speak on six points:

2) the situation in the Supreme Court over the death of Ruth Ginsburg;

4) the economy and its recovery from the pandemic;

In total, the debate will last for an hour and a half. Many experts expect surprises in the air. It's no secret that Donald Trump is much more powerful in public speaking, and besides, he never reaches for a word in his pocket. However, it is also no secret that in most issues the electorate supports the views of Joe Biden. Thus, we are waiting for a very fun performance, which can be called almost the main event of the current week.

And until the debate began, Donald Trump did not forget to once again prick the Democrats. This time, Trump felt that the Democrats were slowing down the process of developing a vaccine against the "coronavirus". As usual, the President did not provide any evidence of his words. Over the past 4 years, everyone has become accustomed to the fact that the American President makes mostly unprovable statements, and often absurd.

The last thing I would like to note is that Trump very quickly found a replacement for the prematurely deceased Supreme Court Justice Ruth Ginsburg. Her successor should be 48-year-old, Amy Coney Barrett. Thus, in the near future, the Senate will vote for this candidate, in which the majority of voters are Republicans. Thus, there is no doubt that Amy Barrett will become the new Chief Justice, bringing the number of judges appointed by Republicans to 6 out of a possible 9. We are waiting for the fight between Trump and Biden in the Supreme Court.

As for the US dollar, it is likely to continue to remain under market pressure until the election. We still believe that traders and investors will not take risks and will simply wait for the election results before buying the dollar and investing in the US economy. Many fear that Trump will win and start a war with large US companies that have production in China and other countries with cheap labor. Thus, we do not expect strong growth of the US currency in the near future. Fixing the price above the moving average line may even trigger the resumption of the upward trend. 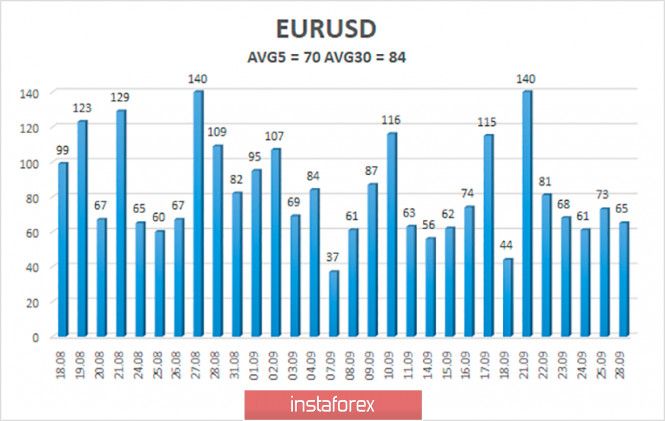 The volatility of the euro/dollar currency pair as of September 29 is 70 points and is characterized as "average". Thus, we expect the pair to move today between the levels of 1.1588 and 1.1728. The reversal of the Heiken Ashi indicator back down to signal the completion of the spiral upward correction.

The EUR/USD pair continues its downward movement. Thus, now you can continue to hold open short positions with targets of 1.1597 and 1.1546 until the Heiken Ashi indicator turns up. It is recommended to re-consider options for opening long positions if the pair is fixed above the moving average with the first targets of 1.1780 and 1.1841.