Overview of the EUR/USD pair. September 30. Donald Trump is losing the trade war with China and is going to start a war with 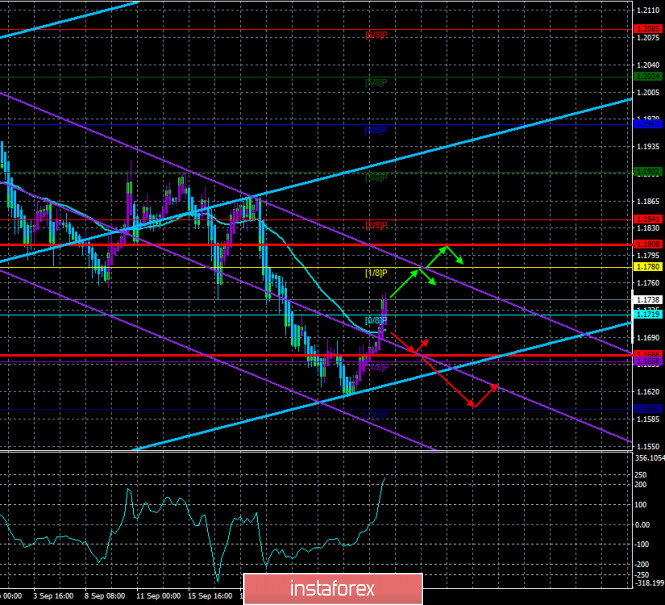 The US currency continued to fall in price against the euro on Tuesday, September 29. Thus, this is probably all that the bears were able to do in the current market conditions. The pair's quotes are already fixed above the moving average line, thus, the trend has already changed to an upward one. Thus, the upward trend can now resume. Further, from our point of view, this will be a logical development since the euro now looks really stronger than the dollar. In Europe, it is also "not without problems". They officially announced the beginning of the second "wave" of the COVID-2019 epidemic. The inflation rate remains below zero. Thus, the fundamental background remains on the side of the euro.

If you try to describe the entire policy of Trump in one word, the concept of "war" will not fit. Still, under Donald Trump, we should pay tribute because America did not get involved in new international military conflicts. Or at least not as actively as under other presidents. Moreover, Trump plans to return home many American soldiers who are now stationed in many hot spots on the planet. In general, under Trump, America's military actions were really not the most active. Therefore, the concept of "conflict" is much more appropriate. The American President got into conflicts with such pleasure that he seemed to get satisfaction from the very process of inciting them. Trump quarreled with the Democrats, with the press, with epidemiologists (when the pandemic began), with the Pentagon, with the Fed, personally with Jerome Powell, with China, with the European Union, and many others. Perhaps its biggest quarrel is the trade war with China. It began two years ago and was designed to offset the injustice of the Chinese towards the American people. After two years of this war, it is safe to say that the injustice was not leveled. First, the US trade balance continues to decline. More precisely, the trade deficit of the United States continues to grow. Therefore, based on this indicator alone, we can make a clear conclusion that the White House did not achieve what it wanted. Moreover, China's trade surplus has grown in recent years. Of course, both countries have a huge number of other countries as trading partners. Therefore, it is impossible to say unequivocally that Washington's actions led to the exact opposite result. Trump has repeatedly stated that from trade relations with China, America loses billions of dollars and gets nothing. However, in addition to this, Trump has repeatedly stated that America is winning the trade war. Although, according to many experts, this is absolutely not the case. First, as a result of this trade war, you can specify the claims of 3,500 American companies against the US government itself. In their opinion, the government had no right to impose duties on imports from China. Among those making claims are Tesla and Ford. Secondly, many Chinese goods as a result of duties have become much more expensive in America, which hits the pockets of the lower strata of the population, who also suffered in 2020 from the "coronavirus crisis". Third, China immediately found other markets for the part of the goods that stopped going to the States due to reduced demand. Fourthly, some authoritative publications claim that Beijing is not fully fulfilling its obligations under the "first phase" of the trade agreement. Fifth, China has started to increase its own high-tech production and export of industrial products. Thus, it is absolutely unclear who benefited from all these perturbations, however, one thing is clear: Washington did not get the desired result.

However, Trump is not going to stop there. If he is re-elected for a second term, he is going to start a war with American manufacturers who have located their factories in China and other countries with cheap labor. According to Trump, these companies should return their production to the United States and create jobs in the United States. Those companies that do not want to return to their home country may lose government orders and taxes may be significantly increased for them. It should be understood that any production in America is much more expensive than in China. Thus, on the one hand, Trump's intentions are good, the American President wants to create jobs for Americans, on the other hand, if we were talking about a difference in the cost of production of 15-20%, then with the help of taxes, companies could be forced to return to America. However, the difference in cost can be from 2 to 5 times. Accordingly, if American manufacturers return home, the demand for their products may decrease significantly. Most experts also note that Trump does not want to bring manufacturers home because he understands that this is impossible since he is a businessman. He wants manufacturers to leave China and stop strengthening the main competitor of the United States in the international arena. However, in almost any case, both the trade war with China and the likely war with American manufacturers will again affect both the economies of China and the United States.

All this uncertainty in the future makes traders and investors very cautious about buying the US currency. It is absolutely unclear how Trump's second cadence may end, however, the results of the first one are visible to the naked eye. And they can hardly please anyone. Nevertheless, Trump's ratings have grown slightly in recent months and now, according to many opinion polls, the gap between Biden and Trump is no more than 5-6%. Whether this is true or not is hard to say, since there are errors in any opinion poll. And in our case, the error of 2% is a lot. However, the first round of debates between a Republican and a Democrat will take place in America today, so we will soon get a huge amount of important and interesting information. 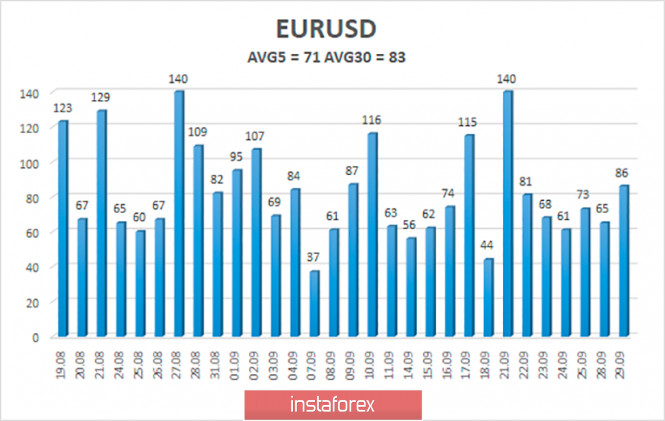 The volatility of the euro/dollar currency pair as of September 30 is 71 points and is characterized as "average". Thus, we expect the pair to move today between the levels of 1.1666 and 1.1808. A reversal of the Heiken Ashi indicator back down may signal the end of an upward correction.

The EUR/USD pair is fixed above the moving average line. Thus, it is now recommended to consider long positions with targets of 1.1780 and 1.1808 before the Heiken Ashi indicator turns down. It is recommended to consider sell orders again if the pair is fixed back below the moving average with the first targets of 1.1666 and 1.1597.

Interesting? Write a comment below.
 #Overview of the EUR/USD pair. September 30. Donald Trump is losing the trade war with China and is going to start a war with
Forward 
Backward 