Overview of the EUR/USD pair. September 8. The "coronavirus" epidemic is receding in the US. 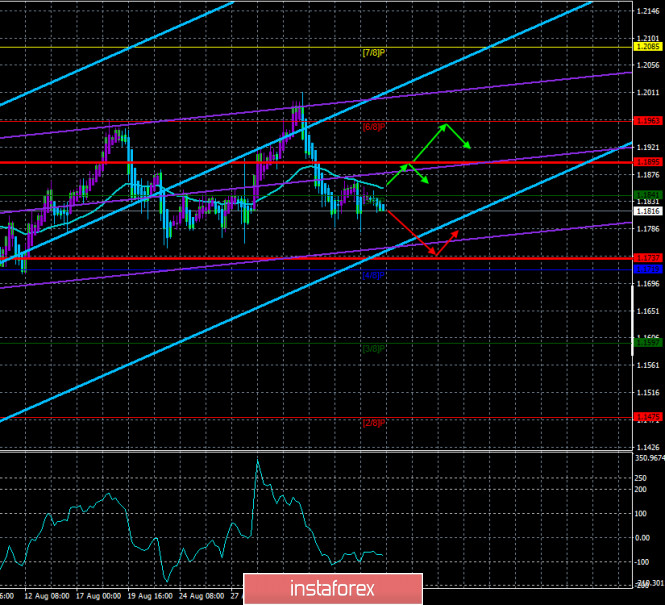 The EUR/USD pair spent the first trading day of the week in absolutely calm trading with minimal downward bias. The technical picture for the euro/dollar pair has not changed for several weeks. In general, the pair's quotes spent all this time between the levels of $ 1.17 and $ 1.19. There were two attempts to leave this channel and both failed. Thus, the situation remains as follows: the bulls continue to hold the market in their hands, however, they do not have any new reasons for making purchases of the euro currency; bears have the opportunity to sell the pair (that is, buy the dollar), however, there are few reasons for this. It turns out that both bulls and bears are simply waiting for a change in the general fundamental background, which remains quite unsightly for the US currency.

As a whole, everything that is happening now in the United States can be called in one word - "mess". Intentionally, we do not want to touch on the topic of mass riots in Belarus, as they have nothing to do with the euro/dollar pair. Nevertheless, Belarus could have been expected to be in such a mess. The fact that Alexander Lukashenko has been in power for three decades now only shows that the word "elections'' in this country has nothing to do with the word "democracy". In the third decade of Lukashenka's rule, people's nerves broke down, and they have been protesting for a month. However, in the United States, there has not been such a mess as this for a long time. Let's start with the most painful topic of "coronavirus". There is undoubtedly positive news here for Americans, Donald Trump, and the US dollar. The number of daily registered cases of the disease continues to decline and on September 6, it was already 32,000. This is still a lot, however, the values were fixed twice as high a month ago. Thus, it is safe to say that the epidemic has begun to recede, and now the situation in the country will become a little easier. This also applies to the workload of hospitals and pressure on the White House, and economic stress caused by the crisis. Nevertheless, many processes in the United States now continue to pass through the prism of future presidential elections. For example, Donald Trump continues to bet on the invention of a vaccine against "coronavirus" until November 3 and has even managed to appoint the "pre-election vaccination" on November 1. This term means that if the vaccine is invented before the end of October, the most vulnerable segments of the population (people over 65 years of age, health workers) will be vaccinated on November 1. However, many Americans fear that the population will be vaccinated with a drug that has not passed all the necessary clinical trials. And perhaps everyone knows that it can take from a year to several years to create a vaccine with all the necessary tests, since Anthony Fauci, other epidemiologists, and doctors have repeatedly voiced similar figures and forecasts. Thus, the situation in the States with the "coronavirus" is slightly improving, however, no one knows what will be the consequences of the invention of such a "pre-election vaccine"...

From other news, we can only state that Republicans and Democrats can not agree on a new package of financial assistance to the American economy, the topic of the US-China trade standoff is put on pause, and the situation with rallies and protests across America caused by racial scandals is softening a little. However, all this does not fundamentally change the fundamental background in favor of the US dollar. If America were currently in intensive care, its condition would be described as "stable severe". Yes, maybe it's not that bad. In the same Belarus, which does not have such economic power, everything is much worse now. However, we believe that it makes no sense to compare Belarus and the United States. It makes sense to compare the US with the US in the past.

Most importantly, most experts, analytical agencies, and publications believe that the key to solving all the problems will be the elections on November 3. The future of the country and the way it goes further will depend on the results of the elections. Naturally, two months before "Hour X", the fierce debate between Trump and Biden, as well as between their entourage, continues. Trump continues to use the tactics of pressure on the opponent and tries to play the few remaining trumps on his hands. For example, the US President has been challenging Joe Biden to debate for several months in a row. Trump is confident that he will win a crushing victory, and even people who are skeptical of Trump's personality are sure of this. Everyone knows that Trump can speak in front of the public, and does not go for a word in his pocket. The Democrats, who have so far refused to hold debates, also know this. For example, the Speaker of the House of Representatives Nancy Pelosi says that Trump will behave obscenely at the debate, "as in principle and every day", and we personally also have little doubt about this. Trump, who only called Nancy Pelosi "crazy" several times, is unlikely to behave with restraint and correctly concerning Biden. Especially understanding and realizing that the Democrat is ahead of him in political ratings and did not make as many mistakes as he did.

However, there is still no escape from the pre-election debates. They will be held in three stages between September 29 and October 22. In line with this, Biden will have a hard time. This is noted by all experts-political scientists. In their opinion, Biden does not have oratorical skills, often admits reservations, and does not have charisma. Thus, Trump is almost guaranteed to win the debate. But will the results of the debate affect political ratings? Most likely, yes. The ability to clearly express their position is what can convince some Americans to vote for the amorphous Biden, who has long been nicknamed "Sleepy Joe". Thus, Trump has a real opportunity to reduce the gap from his competitor by a few more percent. As a result, both candidates may approach the elections with almost equal political ratings. In general, in any case, despite all the opinion polls and social studies that predict a victory for Biden, everything will be decided on November 3. Or maybe for the next few weeks. 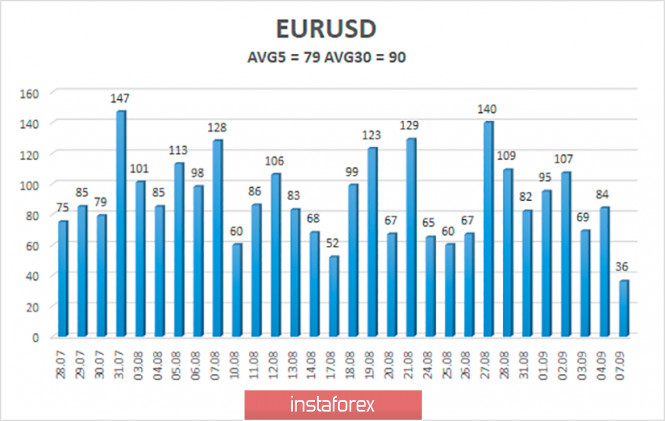 The volatility of the euro/dollar currency pair as of September 8 is 79 points and is characterized as "average". Thus, we expect the pair to move today between the levels of 1.1737 and 1.1895. A reversal of the Heiken Ashi indicator to the top will signal a possible new round of upward movement.

Interesting? Write a comment below.
 #Overview of the EUR/USD pair. September 8. The "coronavirus" epidemic is receding in the US.
Forward 
Backward 