Overview of the GBP/USD pair. October 1. London and Brussels simultaneously declared that they would not concede and started 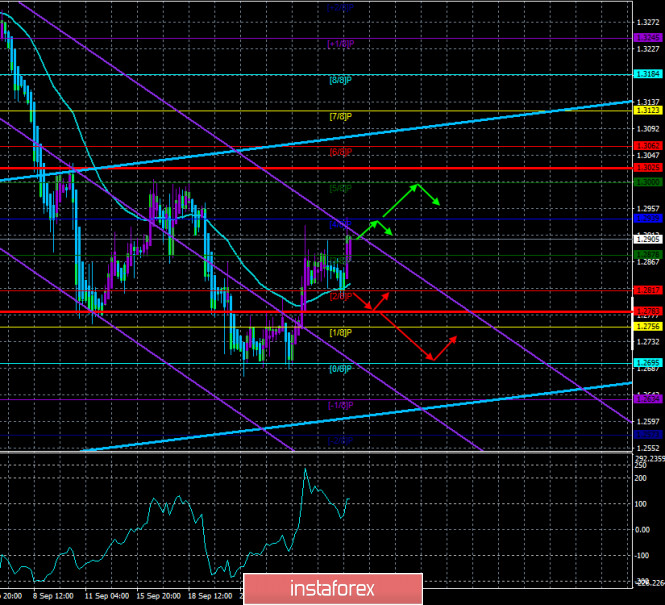 On Wednesday, September 30, the British pound paired with the US dollar also traded absolutely calmly. Throughout the trading day, there was also plenty of interesting information for the GBP/USD pair, starting from the same Trump-Biden debate, ending with the publication of GDP in the UK and the US for the second quarter of 2020. However, traders did not consider all the information at their disposal important. As a result, the quotes first corrected to the moving average line, after which they attempted to resume the upward movement they had started. The pound is now in an even more difficult fundamental situation than the euro. The growth of the European currency is stopped by the fears of traders associated with purchases of this currency near two-year highs. In addition, the ECB optically hinted that it considers the current euro exchange rate to be too high, so further appreciation may lead to currency interventions, which is also feared by traders. With the GBP/USD pair, the situation remains such that there is no reason to buy either the dollar or the pound itself. The fundamental background in the US and the UK is equally bad and weak.

What important news came from Albion yesterday? First, the British Parliament passed the "Johnson bill" in the second reading. Now it will be sent to the House of Lords for revision and amendment, after which the final vote will take place. Most experts still believe that this bill is nothing more than a way to put pressure on the European Union and force it to make concessions. After all, the final round of negotiations between Brussels and London on an agreement on future relations also began on Tuesday. However, Vice-President of the European Commission Maros Sefcovic said that the European Union is not going to make concessions to the UK, which is going to adopt the controversial bill "on the internal market" and thus violate the agreement on the Northern Irish border with the EU. A little later, a similar statement was made by the chief negotiator from Britain, David Frost, who said that London wants to get full independence from the European Union, and not remain tied to it in many areas. Thus, it is not clear why this final stage of negotiations is needed at all. The parties can basically just have tea and talk about football. No one believes in the conclusion of an agreement anyway. Meanwhile, a member of the British government, Michael Gove, repeated the words of British Prime Minister Johnson that the approved law is insurance in case there is no deal with the European Union. Gove did not comment on the fact that the adoption and implementation of this law would lead to a gross violation of international law.

Thus, it is difficult for the pound to count on a "bright future" with Boris Johnson. And the US dollar – with Donald Trump. If the situation for the US currency can be resolved in a little over a month, then the British Prime Minister can still lead the Kingdom for a very long time.

Meanwhile, the situation with the "coronavirus" around the world continues to worsen. In the States, approximately 40,000 new diseases are still recorded every day. In Britain, the anti-record of three days ago was updated yesterday – plus 7,156 cases of COVID-2019. Thus, in both countries that are interesting in the GBP/USD pair, there is no improvement in the epidemiological situation. Britain, in addition to all the problems that it has already faced, may run into new, unscheduled, and unaccounted for economic problems. The fact is that if the second "wave" of the pandemic is stronger than the first (and the number of daily recorded cases of infection is already higher than in the spring), this will potentially be another strong blow to the economy. In addition to the first wave of the pandemic and the crisis, in addition to Brexit, in addition to the lack of trade deals with the US and the European Union. But London signed a $ 15 billion agreement with Japan. Naturally, this is sarcasm.

As for macroeconomic statistics, the British Gross Domestic Product, although revised upwards, still amounted to a record minus 19.8% in quarterly terms, and minus 21.5% in annual terms. Thus, it was extremely difficult for the British currency to count on support with such figures. In the States, however, the numbers were not much better. GDP for the second quarter in America was -31.4% q/q. Only the ADP report on changes in the number of employees in the private sector showed a larger increase than market participants expected (749 thousand against 650 thousand). However, the US dollar did not gain 10 points on this report, once again proving that macroeconomic statistics now have almost no meaning for traders. What can we say about the index of personal consumption expenditures for the second quarter and the price index of personal consumption expenditures? They didn't matter at all.

From a technical point of view, the pair has bounced off from the moving average line, so the upward movement may resume. At the same time, as long as the price does not overcome the previous local maximum (1.3000), it is pointless to think about the high prospects of the pound. Buyers need to prove their strength and desire to push the pound up again. And, as we have already said, there are very few fundamental reasons for this. And below the moving average line, bears will return to the market. 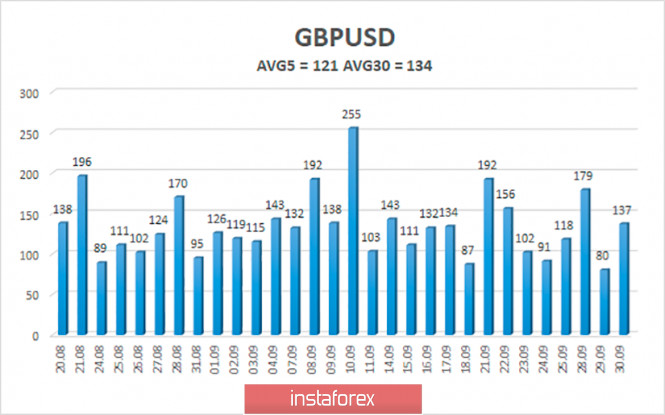 The average volatility of the GBP/USD pair is currently 121 points per day. For the pound/dollar pair, this value is "high". On Thursday, October 1, therefore, we expect movement inside the channel, limited by the levels of 1.2783 and 1.3025. A new reversal of the Heiken Ashi indicator down may signal about a possible resumption of the downward movement.

The GBP/USD pair resumed its upward movement on the 4-hour timeframe, rebounding from the moving average line. Thus, today it is recommended to stay in the longs with the goals of 1.2939 and 1.3000 as long as the Heiken Ashi indicator is directed upwards. It is recommended to trade the pair down with targets of 1.2783 and 1.2695 if the price returns to the area below the moving average line.

Interesting? Write a comment below.
 #Overview of the GBP/USD pair. October 1. London and Brussels simultaneously declared that they would not concede and started
Forward 
Backward 