Overview of the GBP/USD pair on September 4. Brussels and London announced a new failure in negotiations on the deal. 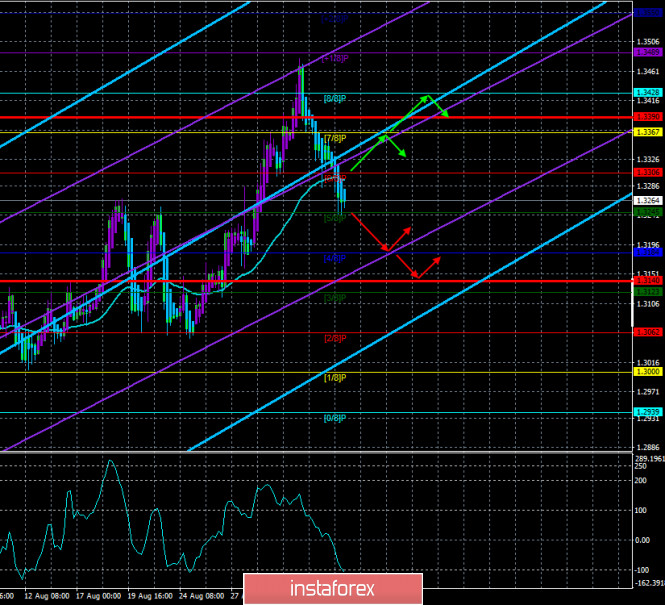 In recent weeks, the British pound has been trading identical to the euro/dollar pair. The upward movement of the pound was slightly stronger. At the moment, the quotes of the pound/dollar pair are fixed below the moving average line, which predicts a change in the trend. However, the picture for this pair is the same as for EUR/USD: each subsequent minimum and maximum price is higher than the previous one. Thus, the upward trend continues although the pair is fixed below the moving average line. Moreover, if traders have been actively buying the British currency and selling the dollar over the past few months based on the fundamental background from America, nothing has changed in recent weeks. Consequently, the British pound can continue to grow, as the fundamental background in America has not changed at all, and the entire British background is ignored by traders recently. We have already talked about the problems of the British economy that it has already faced. For example, the loss of 20% of GDP in the second quarter, which is not so much different from the 32% loss of GDP in the US. Moreover, the British economy will face new challenges from January 1, 2021. This will be an additional blow to the economy. Also, it is completely unknown what will happen to the coronavirus epidemic in the Foggy Albion with the arrival of the cold season. If the epidemic continues to rage in the United States at this time (and this factor has also been worked out by the market with a vengeance), then a second "wave" may begin in Britain with the arrival of autumn. This is not only an epidemiological problem but also a new economic one. And let's not forget that the Kingdom may face its own "ScExit" (from Scotland Exit) in the coming years. Scotland has been hinting to London for more than a year that it does not want to remain part of the Kingdom and wants to return to the EU. London does not give the go-ahead for a new independence referendum, however, this does not mean that the desire of Scots to remain in the European Union has disappeared. In general, the problems in Britain are no less than in America, however, it is the British pound that has grown steadily in recent months. Even if this is true, since before that there was a collapse in the British currency quotes at the very beginning of the "coronavirus" epidemic, now the quotes have fully recovered and we need a banal pullback down. Therefore, no matter how you look at the situation for the pound/dollar pair, a significant downward correction is necessary.

Meanwhile, London and Brussels have managed to hold another round of negotiations on a future agreement that no one believes in anymore. Angela Merkel, for example, has already openly stated that her country does not want to participate in the negotiations and "waste time". Michel Barnier said on September 2 that he returned from London and saw no change in the UK's position. "I am disappointed and concerned," the chief negotiator said. At the same time, British negotiator David Frost said that "the parties have maintained serious differences", but at the same time called the talks "useful". "We remain in close contact with the EU and look forward to the next round of talks next week in London," said David Frost. Thus, the negotiations continue to proceed formally. London is taking its time, showing full readiness to remain without an agreement, and there is less of the time left. There is no progress on key issues. Thus, it is highly likely that the parties will not sign any agreement in 2020.

Also this week, the head of the Bank of England, Andrew Bailey, made a statement. He said that in the near future, the British regulator is not going to resort to the introduction of negative interest rates, however, he did not say anything about a possible new expansion of the quantitative stimulus program. According to traders' expectations, by the end of the year, the Bank of England will once again expand the QE program by 50-100 billion pounds. Also, Andrew Bailey stated that "the risks due to a new outbreak of the coronavirus epidemic are higher than the risks of Brexit". Thus, it is also impossible to interpret Bailey's speech as positive.

As for macroeconomic statistics, at the beginning of the new week, it was also few in the UK. Business activity indices for manufacturing and services declined slightly. American statistics were more important, however, market participants cheerfully ignored them. Thus, it turns out that the pound/dollar pair depends on everything on technical factors and the banal desire or unwillingness of traders to buy the pound or sell the dollar.

As a result, we have a change in the downward trend, however, there are no special prospects for strengthening the US currency. The whole country continues to be in limbo and the main issue that concerns everyone - who will win the election? Because a lot will depend on this: the future domestic and foreign policy of the country, health care in the country, as well as its relations with China. Thus, now the situation indicates an upward trend where the technique speaks in favor of sales in the short term and both channels of linear regression (medium and long-term perspective). The fact that the price does not manage to overcome the last local minimum also suggests that the bears are extremely weak and are not ready to form a downward trend. In general, the situation is extremely confusing, and there are a huge number of factors that need to be taken into account now in medium and long-term trade. Therefore, we recommend paying more attention to intraday trading. 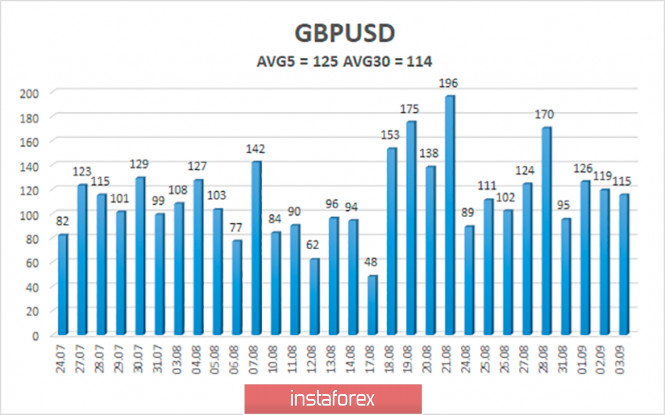 The average volatility of the GBP/USD pair is currently 125 points per day. For the pound/dollar pair, this value is "high". On Friday, September 4, therefore, we expect movement within the channel, limited by the levels of 1.3140 and 1.3390. A reversal of the Heiken Ashi indicator to the top will indicate a possible resumption of the upward trend or a round of upward correction.

The GBP/USD pair started a downward movement on the 4-hour timeframe. Thus, today it is recommended to continue trading lower with the goals of 1.3184 and 1.3140 until the Heiken ASHI indicator turns upward, which will indicate a round of correction. It is recommended to trade the pair for an increase with the goals of 1.3367 and 1.3390 if the price returns to the area above the moving average line.

Interesting? Write a comment below.
 #Overview of the GBP/USD pair on September 4. Brussels and London announced a new failure in negotiations on the deal.
Forward 
Backward 