Overview of the GBP/USD pair. September 10. London risks ruining relations with the European Union and America. 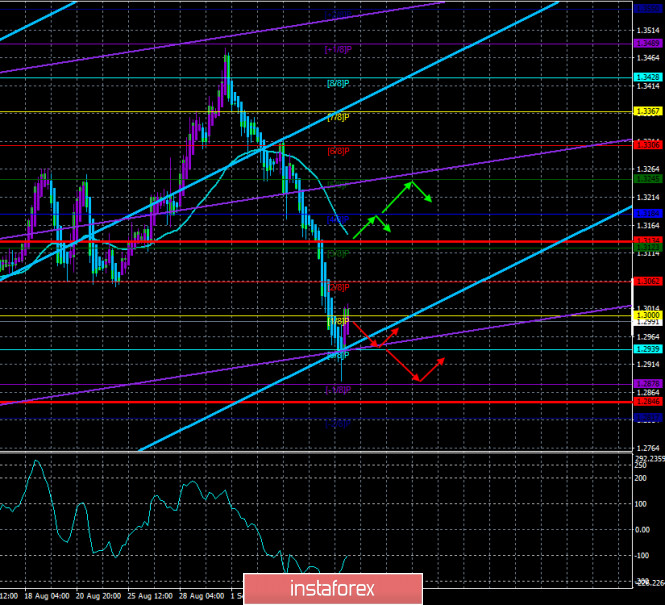 During the last trading day, the British pound fell to the level of 1.2884. Thus, in seven working days, the pound fell against the dollar by almost 6 cents. The reason for this collapse was mainly news from the UK. First, it became known that the next stage of negotiations failed, then Boris Johnson said that the negotiations should be completed by October 15, and the UK is ready to leave the EU without a deal. In the end, the media received information from the British government circles that London is going to abandon certain provisions in the agreements with the EU that determine the functioning of the border between Ireland and Northern Ireland. All these events and news not only reduced the probability of signing at least some agreement between Brussels and London to almost zero but also significantly increased the likelihood that relations between the bloc and the Kingdom will be extremely difficult in the future. Some analysts even suggested that in 2021, the countries may start their own trade war, since if London goes to a direct violation of previously reached agreements, Brussels may apply sanctions against the UK.

The "UK internal market bill" is the name of the document that is due to be published today, and members of the British Parliament will vote for it next week. This document deals with the protocol for Northern Ireland and the procedure for customs checks at the border between British Ireland and European Ireland. Northern Ireland Secretary Brandon Lewis said the new regulations were designed to "guarantee businesses and individuals unfettered access to the UK market". According to Lewis, this law will "specifically and restrictively" contradict the agreement between the EU and Britain, which was reached last year.

Representatives of the European Union have already strongly criticized London's actions. EU chief negotiator Michel Barnier said that London will have to adhere to all the agreements that were reached earlier. European Parliament President David Sassoli said any attempt to change the agreement unilaterally would have serious consequences. Also condemned the unlawful actions of the London and ECB chief Christine Lagarde. However, in principle, something like this could be expected from the government of Boris Johnson. His main task really was to complete the Brexit procedure and it seems that the British Prime Minister did not play quite fair. At least, this conclusion suggests itself, based on recent events. The issue of the border between Ireland and Northern Ireland was one of the most acute, since the Belfast Agreement of 1998, which ended 30 years of war on the island of Ireland, just implied the absence of a border between the two states. However, with the UK's withdrawal from the EU, the border between these states was bound to appear. Thus, Boris Johnson, most likely, promised the EU leaders everything so that the Brexit procedure does not stall once again, and now will try to circumvent or violate some of the provisions of that agreement in order to prevent a new civil war on the island.

The most interesting thing is that London's actions are not approved only in the European Union. Wales and Scotland said the new bill threatens the unity of the United Kingdom and takes away powers from them. Authorities in Wales and Scotland fear the new law will limit their power. Currently, the parliaments and governments of Scotland, Northern Ireland, and Wales are semi-autonomous. This is the status that the above-mentioned countries are afraid of losing.

In addition, representatives of the US Democratic Party warned London that if Joe Biden becomes US president, the violation of the Brexit agreement on Northern Ireland will significantly complicate the process of agreeing and signing a free trade agreement between the States and the UK. Joe Biden is a native of Ireland and honors the Belfast Agreement between Britain and Northern Ireland, which is guaranteed by America. Thus, London's actions can not only spoil relations with the European Union but also with America, especially if Joe Biden wins the election, which is what everything is going for. However, let's not get ahead of ourselves. First, you need to wait for the official publication of the new bill and assess how much it violates previous agreements with the EU. Next, you will need to wait for the vote and see if it will be accepted at all. And after that, we will have to wait for a response from the United States and the European Union. It is noteworthy that more recently, Boris Johnson actively criticized China, which violates the agreement with the UK regarding the status of Hong Kong, which until 2047 was supposed to remain completely autonomous from the Chinese government unit. However, as we can see, London itself can easily violate the principles of international law, if it is profitable for it. Boris Johnson himself has not yet commented on the new bill.

As for the pound and its prospects, we believe that the general fundamental background from the UK may continue to contribute to the fall of its quotes. However, do not forget that the situation in America is much worse now. For example, against the euro, the US dollar is not growing at all. Thus, the fall of the British currency may be limited. In fact, until there are new messages from the European Union, from which it becomes clear what awaits the UK if it violates the previously reached agreement, the British currency should no longer become cheaper. At this time, even an upward pullback has begun, and both linear regression channels continue to be directed upwards. Thus, although the fall was strong and rapid, it does not mean that it will continue. Although the general situation in the UK contributes to this. 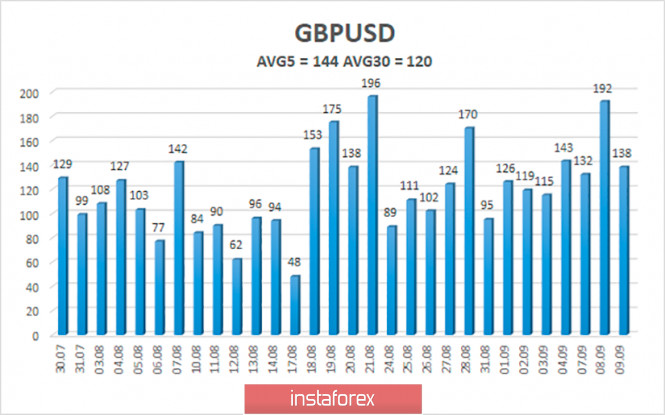 The average volatility of the GBP/USD pair is currently 144 points per day. For the pound/dollar pair, this value is "high". On Thursday, September 10, therefore, we expect movement inside the channel, limited by the levels of 1.2846 and 1.3134. A downward reversal of the Heiken Ashi indicator will indicate the end of the upward correction within the downward trend.

The GBP/USD pair started a round of corrective movement on the 4-hour timeframe. Thus, today it is recommended to resume trading on the downside with the targets of 1.2939 and 1.2878 when the Heiken Ashi indicator turns downward. It is recommended to trade the pair for an increase with the first target of 1.3245 if the price returns to the area above the moving average line, which is not expected in the near future.