Overview of the GBP/USD pair. September 11. In the UK, the second "wave" of the pandemic begins. 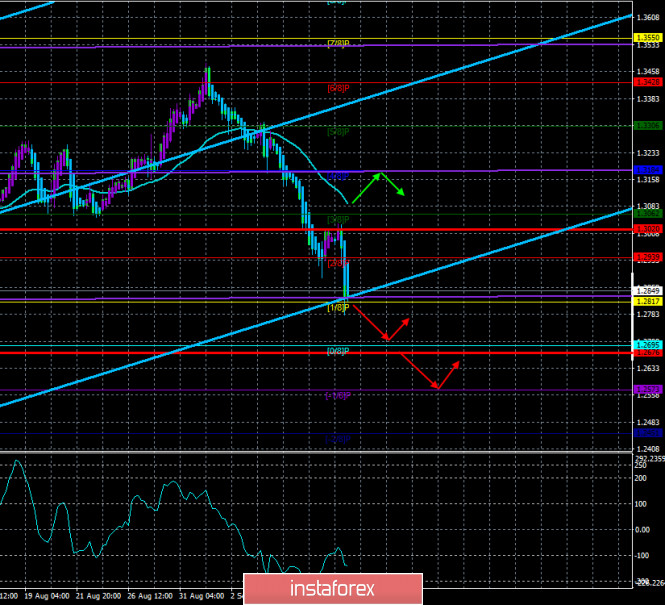 The British pound, after a slight correction, resumed its downward movement within the downward trend that began a week and a half ago. The bears, who until September could not start a downward movement on the pound/dollar pair, finally cheered up and began to attack. Of course, the news from the UK helped them in this. Over the past week, all the publications have been writing about another failure of negotiations between London and Brussels, as well as about possible illegal actions of London in relation to the European Union, with which there is an agreement on the Northern Ireland border. In general, the pound is very sensitive to everything that is happening now in the UK and even "forgot" about the problems of the United States, which have not gone away. However, we have repeatedly written that traders have forgotten about the problems of Britain, so now, from our point of view, everything is logical. The British pound began to fall, which was suggested for a long time, since there were no special reasons for the growth of this currency in recent months.

Meanwhile, Prime Minister Boris Johnson finally made an official statement and tried to explain what the new law is and what goals it pursues, putting it to a vote in parliament. Johnson stated: "My task is not only to preserve the integrity of the United Kingdom, but also to protect the peace on the island of Ireland and the Belfast Agreement. And to do this, we need an insurance tool — to protect our country from a radical or reckless reading of the protocol, which could lead to a border in the Irish sea and harm the interests of the Belfast Agreement." Thus, Johnson explained only what interested many political scientists and other experts from the very beginning of the "divorce" with the European Union. How will the border between Northern Ireland and Ireland be secured if the former leaves the EU with the Kingdom? Now the answer to this question has arrived: Boris Johnson and, perhaps, the entire British Parliament will simply violate previously reached agreements with Brussels and abandon some of the points of the agreement that most strictly regulate trade and customs on the border of the island of Ireland. Interestingly, Scotland, Northern Ireland and Wales immediately criticized this bill, saying that it violates the rule of law. It violates international law. Boris Johnson and his friends put themselves above the law. "I am extremely concerned about the British government's statements about plans to violate the EU withdrawal agreement. This would violate international law and undermine trust," Ursula von der Leyen, head of the European Commission, said in a statement. The US also criticized the bill, saying that it would be difficult for Britain and America to reach a free trade agreement if London so easily and simply violates international law and treaties with other countries (although it was in the context of the US Democratic Party, Joe Biden is a native of Belfast and honors the Belfast Agreement and peace on the island of Ireland). In general, thanks to the efforts of Boris Johnson and his followers, the UK can be severely damaged reputationally. And this is at a time when the country needs to negotiate with other countries on free trade. At a time when the country's economy has already suffered several serious blows. At a time when the country is experiencing some signs of the beginning of the second "wave" of the "coronavirus" epidemic. It is also important to note that some members of the Conservative Party also do not support such actions in London. "Britain may lose the moral superiority of a country that defends international law," said Tobias Ellwood, a Government Minister at the Ministry of Defence. "Our entire economy is built on the idea of Britain as a country that adheres to the rule of law," said Tom Tugendhat, Chairman of the Parliamentary Foreign Affairs Committee.

However, many experts believe that the opposition of the British Parliament will not go under any circumstances to approve this law. Thus, the question will be only in the conservatives themselves. Last year, Boris Johnson was actively expelled from the party and was forced to withdraw those politicians who refused to blindly obey his word. Now is the time to find out how many conservatives are ready to support a completely absurd bill that will only show that no agreements need to be signed with the UK? Some conservatives are already speaking out against this bill, so it may remain a bill. There is also an option in which everything that happens is just another bluff from Boris Johnson. During the year of his rule, we have become accustomed to the fact that Johnson is a smaller copy of Donald Trump, who tries to act without obeying the rules. Trump does not always succeed, and even more so for Johnson. Last year, we wrote about Johnson's "five significant defeats as Prime Minister". So since then, no new victory has been achieved, however, the British government's liability can also be recorded in the fight against the "coronavirus", which was lost outright. Thus, it is absolutely possible that the bill will not be adopted, and all London's actions are aimed at showing Brussels its "character". Perhaps Johnson is trying to achieve additional concessions in negotiations with Michel Barnier in such a bizarre way. It is not yet clear. It will be known for sure next week when the vote on this bill will take place.

Meanwhile, the second wave of the "coronavirus" epidemic seems to be beginning in the Foggy Albion. In recent weeks, the number of new cases has tripled, from about one thousand a day to three. This time, Johnson did not wait for the epidemic to cover the entire country and immediately imposed quarantine restrictions. It is expected that there will be a ban on gatherings of more than 6 people, and the work of public catering establishments will be prohibited from 22 hours to 5 am. There will also be new awareness-raising activities about the use of soap and masks by the population and new fines for non-compliance with certain regulations. "We must act immediately to stop the spread of the virus. Therefore, we simplify and strengthen the rules of social contacts, making them more understandable and accessible to the police," the British Prime Minister said.

Well, the pound reacts extremely painfully to all this news, which is not surprising. The only question now is, how long will the sell-off of the pound continue by market participants? It is difficult to call the movement of the last 7-8 working days anything other than a landslide. 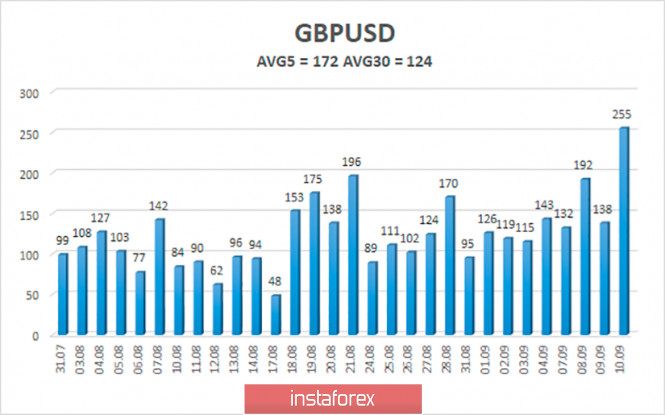 The average volatility of the GBP/USD pair is currently 172 points per day. For the pound/dollar pair, this value is "high". On Friday, September 11, therefore, we expect movement inside the channel, limited by the levels of 1.2676 and 1.3020. A reversal of the Heiken Ashi indicator to the top signals a new round of upward correction within the downward trend.

The GBP/USD pair continues its downward slide on the 4-hour timeframe. Thus, today it is recommended to continue to stay in shorts with targets of 1.2695 and 1.2573 until the Heiken Ashi indicator turns upward. It is recommended to trade the pair for an increase with the first target of 1.3184 if the price returns to the area above the moving average line, which is not expected in the near future.

Interesting? Write a comment below.
 #Overview of the GBP/USD pair. September 11. In the UK, the second "wave" of the pandemic begins.
Forward 
Backward 