Overview of the GBP/USD pair. September 16. The UK signs the first free trade agreement. The UK Parliament approved the "Johnson 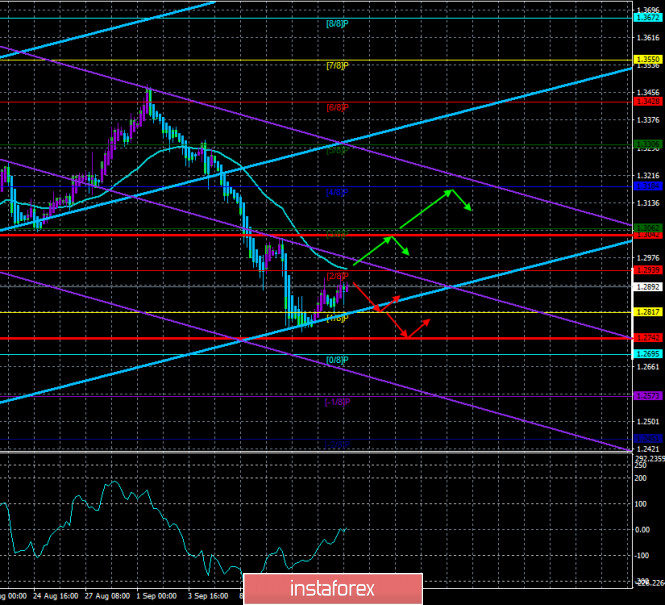 The British pound continued to adjust during the second trading day against the US currency. Despite the fact that the European currency began to fall against the dollar in the afternoon on Tuesday, the pound sterling continued to adjust. Thus, there is no correlation between the main two currency pairs and the pound continues to have a downward trend and it still depends entirely on the fundamental background from the UK. We cannot say at this time that traders refused to continue selling the British pound, but at the same time, sales stopped, and purchases of the British currency did not begin. Although the situation with the new bill of Boris Johnson has almost completely cleared up. The situation with Brexit and the future trade agreement between the UK and the European Union is clear as day. Thus, we can assume that at this time the markets have calmed down a little, and trading may return to its usual course.

Meanwhile, for the first time in a long time, positive news appeared in the UK. Just recently, it became known that negotiations on a free trade agreement with Japan ended successfully and the countries signed a deal for 15.2 billion pounds. In a statement, Britain's Foreign Trade Ministry said the agreement was the first major one as an independent country. The UK government expects that this agreement will create new jobs, and British companies that export to Japan will gain a competitive advantage over companies from other countries. The Ministry of Foreign Trade expects that the agreement will bring about 2 billion pounds to the Kingdom's economy.

However, unfortunately for the British pound, this news did not provide it with strong support. Perhaps simply because an additional 2 billion pounds for the British economy is now very small. Recall that the British economy is losing $ 70 billion annually, starting in 2016, just because of the fact of Brexit. The UK's total GDP is $ 2.855 trillion. Therefore, an additional 2 billion is certainly nice, but it does not play a special role in the economy, which lost 20% only in the second quarter of 2020.

However, negative news from the Foggy Albion continues to arrive. Last night, the UK Parliament approved the "Johnson bill" in the second reading. It is reported that the document will now be sent for revision, however, it has already been approved. As we assumed in previous articles, the conservative votes were enough to pass the controversial bill on their own. However, some other details became known. For example, the fact that Boris Johnson fears that the European Union will go to the literal implementation of the protocol on Northern Ireland and may arrange a "food blockade". It is expected that the UK government will not violate the agreement with the European Union on Brexit if there is no threat to the integrity of the UK and the normal functioning of the British market. In other words, the new law is a kind of safety net, at least according to Boris Johnson. Also, many experts believe that by passing this law, Johnson creates additional pressure on Brussels, wanting to force it to be more accommodating in the negotiations on a free trade agreement. However, we personally believe that this is a "child's bluff and provocation". It is unlikely that such a huge and strong organization as the European Union will follow the lead of 10 Downing Street and does not understand the true intentions of the British Prime Minister.

But the European Union may well file a lawsuit against the actions of the British government if Boris Johnson really violates any of the points on the Brexit agreement. Thus, the Alliance and the Kingdom are now on the verge of a very serious conflict. The whole situation looks like this: The EU and Britain do not agree on free trade, then London is highly likely to violate the agreement on Northern Ireland. This will further reduce the likelihood of a free trade deal between the Bloc and the Kingdom in the future, and also significantly increase the likelihood of a conflict that could end in a trade war or the introduction of a bunch of sanctions and duties on both sides. Thus, given that the seventh and eighth rounds of negotiations between the David Frost and Michel Barnier groups failed as well as the previous six, it is likely that London and Brussels will now follow in the footsteps of the United States and China. By the way, the United States has already warned London that the future free trade agreement between them may also be at risk of failure if London violates the agreement with the EU. However, this warning was made by representatives of the US Democratic Party and with the caveat that Joe Biden will win the election on November 3. Nevertheless, it is Biden who is now leading in American sympathies, so the probability that he will become the next president is still very high.

Thus, for the British pound at this time, there is such a situation that the negative frankly outweighs the total positive. Moreover, until September 1, the growth of the pound for several months is not particularly logical and justified. Yes, in America in 2020, there are all sorts of crises, and the economy has fallen by record values in the last 100 years. But we have repeatedly reminded traders that the situation in the UK is not much better. And thanks to the efforts of Boris Johnson, to whom the British themselves have given all power in their hands, things can get much worse. Both economically, politically, and geopolitically. We can only watch the situation unfold. From a technical point of view, the British currency may continue to fall, since the lower linear regression channel is already directed down, and the moving average is also directed down. 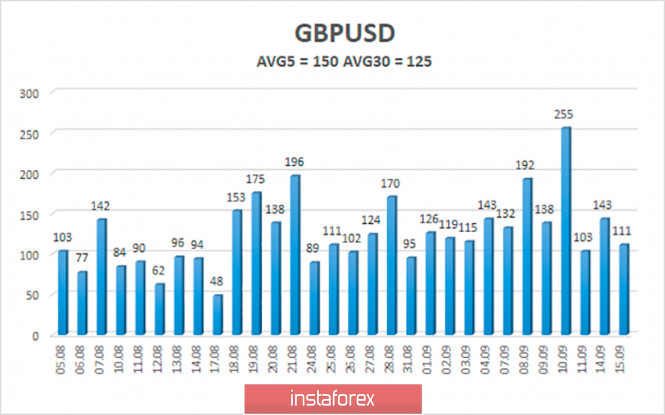 The average volatility of the GBP/USD pair is currently 150 points per day. For the pound/dollar pair, this value is "high". On Wednesday, September 16, therefore, we expect movement inside the channel, limited by the levels of 1.2742 and 1.3042. The reversal of the Heiken Ashi indicator downwards signals the end of the round of upward correction within the downward trend.

The GBP/USD pair has started a correction on the 4-hour timeframe, which may be very weak. Thus, today it is recommended to open short positions with targets of 1.2817 and 1.2742 as soon as the Heiken Ashi indicator turns downward. It is recommended to trade the pair for an increase with targets of 1.3062 and 1.3184 if the price returns to the area above the moving average line.