Overview of the GBP/USD pair. September 17. Britain, led by Boris Johnson, is in direct conflict with the European Union. 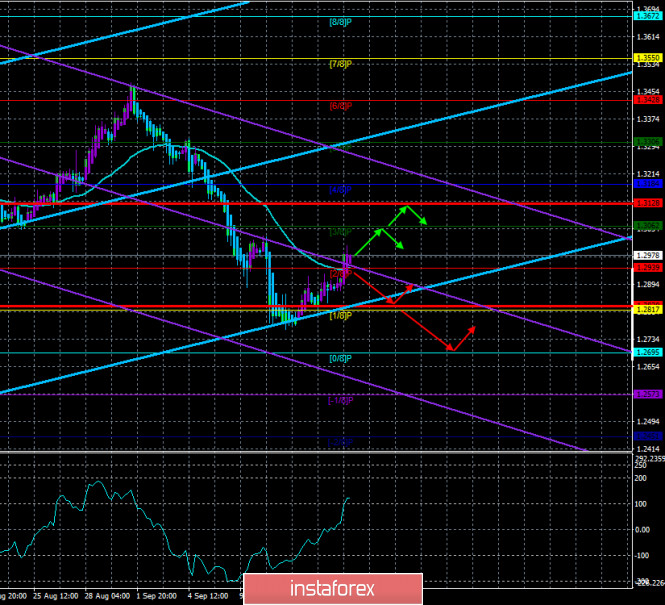 The British pound continued to adjust during the third trading day against the US currency. Thus, from our point of view, everything is logical for the pound. The pound/dollar pair fell on reports of further failures in negotiations between London and Brussels and that London intends to violate the agreement concluded with the European Union regarding the situation on the border between European Ireland and British Northern Ireland. Thanks to this news, the pair lost about 700 points. Therefore, it is not surprising that when the flow of disappointing news stopped, the pair began to correct and have already won back about 200 points. However, it is the fundamental background that continues to be the main driver of the pound/dollar currency pair. New information may be received from the British Parliament or the European Union regarding the brewing conflict between the parties, and the British currency may again be under serious market pressure.

In recent months, when the British pound has been growing quite steadily in price, we have repeatedly questioned the validity of such a rise in price. The problem was that both the euro and the pound were growing solely because of the falling demand for the US currency. That is, it is not the euro and the pound that grew, but the dollar became cheaper. However, this process could not continue forever. And the first to fail was the buyers of the pound/dollar pair. The pound collapsed quite rightly, since the US economy had problems in 2020, and the British economy has been experiencing them since 2016 and may continue in 2021 and 2022. Recently, the topic of a trade agreement between Britain and the EU has become rather boring. It seems that it has already been worked out by traders several dozen times. Nevertheless, this is the main topic for London. After all, the problem is that if there is no agreement, there is a new contraction of the British economy. Thus, from 2021, the UK economy may begin to contract again or slow down in its recovery. Naturally, this situation does not suit investors who do not want to invest in British companies, and in the British economy, it is completely unclear on what terms London and Brussels will trade from 2021. And now, when the threat looms over the peaceful coexistence of the European Union and Britain, those who want to buy the pound are even more diminished. Therefore, if it were not for the "four types of crisis" in the US, which we have already talked about more than once, then the pound would now be hanging around the $ 1.10 mark, or even lower.

Meanwhile, top EU officials continue to say that the chances of signing an agreement with Britain are melting away. This time, Ursula von der Leyen, head of the European Commission, spoke in a similar vein. Michel Barnier also says this, but these statements are not news, since it was clear in March that the probability of an agreement is minimal. And there were several reasons for this, the main ones being:

1) Boris Johnson from the very beginning was not going to conclude any agreements with the European Union but was going to implement a "hard" Brexit.

2) The EU wanted to conclude a comprehensive agreement and bind the UK as much as possible to European norms and legislation. London agreed to sign a new trade agreement.

As a result, if earlier we thought that an agreement between the EU and the UK was unlikely to be achievable, meaning an agreement in 2020, now we do not believe that a trade deal is possible between the Alliance and the Kingdom at all. If the "Johnson law" comes into force, then the European Union will go to international courts, impose sanctions and duties on the UK, or even arrange a border somewhere in Ireland. This will be very difficult to do technically because Ireland and Northern Ireland were at war for about 30 years and only the Belfast Agreement of 1998, which implies the absence of a hard border between these States, put an end to the bloodshed and conflict. Therefore, the EU, if Britain refuses to impose strict customs controls and checks on the border between Northern Ireland and the rest of the UK, it will be very difficult in principle to place a border separating Northern Ireland from the bloc. However, it is unlikely that Brussels will simply give in to London on this issue. Most likely, the parties will enter into a conflict, which in the first place may negatively affect the British economy.

Well, the main culprit of the celebration, Boris Johnson, meanwhile, was accused of intending to spoil the country's reputation. "When Her Majesty's Minister gives the floor, it must be unbreakable," said Geoffrey Cox, a former British Crown lawyer. The same view is supported by all the opposition forces in the UK, as well as some conservatives. However, we can only say that the British people can only blame themselves for all the potential ills. It was the British people who in December last year put all power in the hands of the conservatives, who are ready for the most part to almost blindly obey Boris Johnson. Thus, it is Johnson who now has full power in the country and can pass almost any laws without fear of opposition. Accordingly, he can do whatever he wants, but the British people, whose standard of living may fall, will have to deal with it, as usual.

Thus, it is the long-term prospects of the pound that remain very vague at this time. In the States, everything can be decided in early November. If Joe Biden becomes the new president, there is no doubt that the markets will cheer up, and buyers of the dollar will be overflowing with optimism. Of course, Biden can also make bad decisions, but no one knows about it yet. But the future of the UK in the next couple of years is in impenetrable clouds. Therefore, in the long term, we believe that it is the pound that will continue to fall. 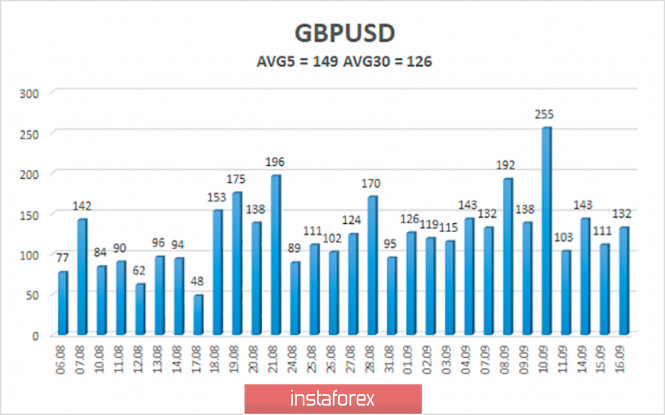 The average volatility of the GBP/USD pair is currently 149 points per day. For the pound/dollar pair, this value is "high". On Thursday, September 17, therefore, we expect movement inside the channel, limited by the levels of 1.2830 and 1.3128. The reversal of the Heiken Ashi indicator downward may signal about a possible resumption of the downward movement.

The GBP/USD pair continues to correct on the 4-hour timeframe and the price has already been fixed above the moving average line. Thus, today it is recommended to consider options for opening long positions with targets of 1.3062 and 1.3128 as long as the Heiken Ashi indicator is directed upwards. It is recommended to trade the pair down with targets of 1.2817 and 1.2695 if the price returns to the area below the moving average line.

Interesting? Write a comment below.
 #Overview of the GBP/USD pair. September 17. Britain, is in direct conflict with the European Union., led by Boris Johnson
Forward 
Backward 