Overview of the GBP/USD pair. September 18. The second "wave" of the COVID-2019 epidemic in the UK. 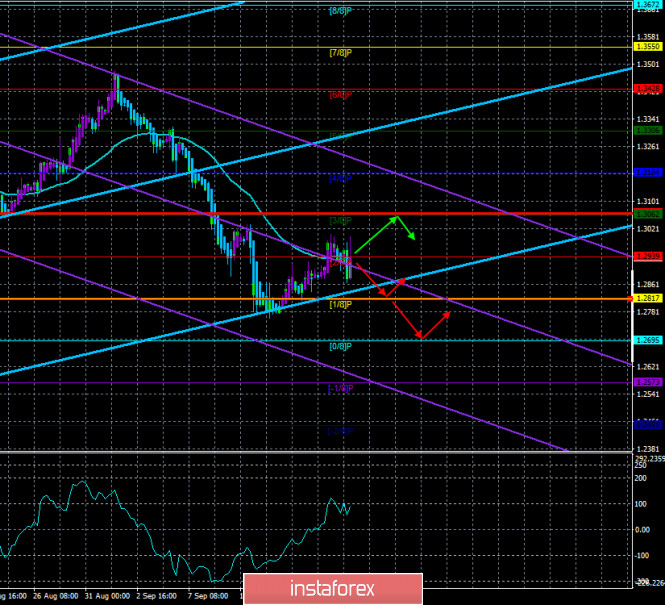 Now, what about the British pound, which has recently been hit by new misfortunes thanks to Boris Johnson and London's position in negotiations with the European Union? The British currency has completely repeated the movements of the euro/dollar pair over the past two days. After the Fed meeting ended and the markets became aware of all the necessary information, the US dollar rose by 100 points, after which it also rushed in the opposite direction, as if showing that it rose for no reason. Over the past day, all losses of the British currency were leveled. Thus, in general, the pound/dollar pair just continued to correct in the last two days after the 700-point drop that began on September 1. In total, the pound managed to win back more than 220 points. The pound has risen in price in recent days with great difficulty, which indirectly indicates that the fall may resume with a new force at almost any moment. However, there is one "but".

This "but" is the meeting of the Bank of England that took place yesterday, which almost went unnoticed. In the article on the euro/dollar, we focused the traders' attention on two theses of Jerome Powell. The first is "the outlook for the economy remains uncertain". We fully agreed with this. Thus, the Bank of England in its final communique used the same wording for the prospects of the UK economy. "Absolutely indeterminate." Naturally, for the same reasons – the "coronavirus" epidemic. "The recent increase in COVID-19 cases in some parts of the world, including the United Kingdom, may have an additional impact on economic activity, although probably on a smaller scale than seen earlier this year," BA said in a statement. It should be noted that in the UK, there has been a recent increase in cases of "coronavirus", which can be called the "second wave". The maximum daily levels of the disease at the peak of the previous wave were 4-5 thousand per day. In recent weeks, 3-4 thousand people have been infected every day in Britain. Thus, just like this, Britain has reached almost maximum levels of morbidity. And this creates the risks of a new quarantine, a new "lockdown" (whatever Boris Johnson says), as well as increased risks for the economy, which is still in a state of shock after Brexit and is preparing for a new "knockout" in the form of a new trade deal with the EU. As for the second thesis – about the pace of economic recovery – the Bank of England refrained from assessing, saying only that the economy grew by 6% in July.

The main parameters of monetary policy remained unchanged. The rate is 0.1%. The program of quantitative stimulation – in the amount of 745 billion pounds. However, there is one more thing that should be noted – the British Regulator again started talking about negative rates. This time in the context that it is openly considering the possible use of this tool. BA also emphasizes that not only the second "wave" of the "coronavirus" creates high risks for the economy. Leaving the European Union without a deal (which is almost guaranteed to the Kingdom) will also leave its mark on the "face" of the British economy. Thus, it is likely that BA refrained from enthusiastic assessments of the economic recovery for good reason. Most likely, before the end of 2020, the British Regulator will still resort to another expansion of the quantitative stimulus program. Well, what will happen in 2021 is anyone's guess. As for inflation and the timing of the key rate increase, the Bank of England also considers the 2% level as a target and reports that it is not going to raise rates until inflation returns to this value, which it does not expect for the next two years. Meanwhile, many British experts believe that the unemployment rate in the UK will continue to grow and reach its maximum value in the fourth quarter of 2020. The regulator may have to introduce negative rates. All this is a bearish factor for the British pound.

Meanwhile, Boris Johnson said that the UK government is doing everything in its power to avoid a new wave of the pandemic and prevent another nationwide "lockdown". However, even if the number of new cases increases significantly, a new "lockdown" is unlikely to be introduced. Boris Johnson, like his colleague Donald Trump, is an ardent opponent of "total quarantine" and believes that the consequences of the "lockdown" will be even more serious than from the epidemic. Therefore, Johnson is already stating that " Britain cannot afford a second lockdown, as its financial consequences will be disastrous". According to Johnson, "Britain must cope with the methods and tools at its disposal now, namely mass testing, social distancing, the rule of six, and the mandatory wearing of masks in public places".

Based on all of the above, we conclude that the pound and the dollar now remain absolute outsiders of the currency market. If you look at the euro/dollar pair, you can see that the US dollar is not strengthening. It only strengthens against a currency that is as weak at the moment as it is, against the pound. The outlook for both the dollar and pound issuing economies remains extremely uncertain. At the same time, much more uncertain than the prospects for the European economy or any other. In the United States, elections are approaching. Also, a constitutional crisis is planned in the United States if Trump loses the election and refuses to leave the post of president. This is also possible, and the American media regularly write about it. Britain has its own "Santa Barbara" called "Brexit, negotiations with the European Union", which recently also risks being continued in the form of a new series "violation of the Northern Ireland Protocol by Boris Johnson". Overall, the outlook for the pound is even bleaker. Thus, none of the currencies has a pronounced advantage now. Anyone can fall. It is best to make decisions now based on technical analysis and only taking into account the general fundamental background. For example, if there are new reports of disagreements between London and Brussels, then a new round of downward movement of the pair may immediately begin. 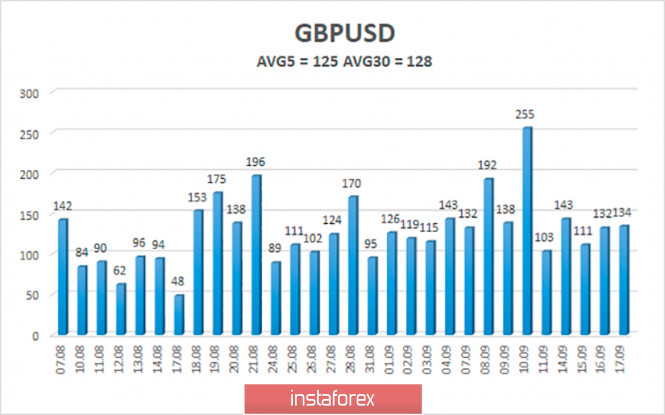 The average volatility of the GBP/USD pair is currently 125 points per day. For the pound/dollar pair, this value is "high". On Friday, September 18, thus, we expect movement inside the channel, limited by the levels of 1.2818 and 1.3064. The reversal of the Heiken Ashi indicator downward may signal about a possible resumption of the downward movement.

Interesting? Write a comment below.
 #Overview of the GBP/USD pair. September 18. The second "wave" of the COVID-2019 epidemic in the UK.
Forward 
Backward 