Overview of the GBP/USD pair. September 2. Negotiations on the relationship between Britain and the European Union can begin 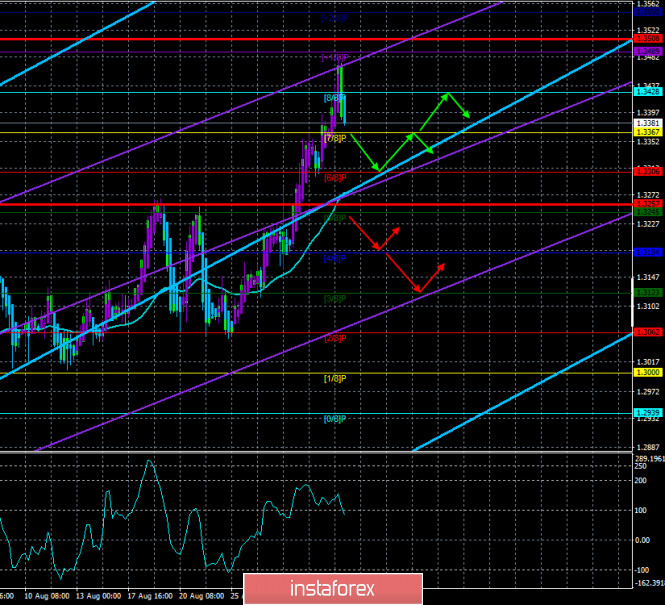 The British pound resumed the upward trend and continues to break all growth records. At the moment, this currency is close to two-year highs against the dollar and does not stop there for a second. There was no normal correction within the trend that started on June 29. We have repeatedly said that the British currency is too overvalued at this time (from our point of view), and the American currency is undervalued. Despite the huge number of problems in America, both economic and non-economic, we should not forget that the UK economy also contracted quite seriously in the second quarter. In addition, everything is heading towards "hard Brexit". This was the original idea of Boris Johnson, and he continues to stick to his plan now. The most interesting thing is that the European Union seems to have initially expected to conclude an agreement with London. However, seven rounds of negotiations, which ended in nothing, dispelled all myths and hopes about this issue. The latest comments from all those involved reflect utter demoralization. Michel Barnier has repeatedly accused London of not wanting to give in, and in his last comment, he said that "the negotiations are moving in the opposite direction". The French Foreign Ministry officially accused London of delaying the talks. Germany refused to hold new talks at the highest diplomatic level. Thus, it seems that the Kingdom and the Alliance will not just complete the "divorce" on December 31, 2020, but will also remain in a very difficult relationship. It is no secret that it is the UK that is less profitable to "divorce" without an agreement. The EU has a stronger economy and will more easily take the blow of diverging from Britain in different directions. Boris Johnson seems to have understood this from the very beginning. The British Prime Minister seemed to think that if you negotiate from a weak position, you will not be able to get any favorable agreement. So Johnson went the way of the bluff. He pretended that Britain is ready to terminate all agreements existing between the country and the bloc. And let the British economy suffer the most. On the one hand, his bluff was played, since now everyone believes that the UK will leave the EU without any agreement. On the other hand, the EU is also not making concessions, probably understanding what London is trying to achieve. Thus, in this situation, we believe that the parties will start new negotiations next year, when the "divorce" will be officially completed and everything can be started from scratch.

Meanwhile, the States are preparing to approve the first American vaccine against the "coronavirus", without waiting for the completion of all the necessary tests. The head of the FDA in the United States, Stephen Hahn, said that the request for approval of a particular drug should come from the developer. "If the developer makes a similar request to us before the third stage of testing (large-scale human testing) is completed, we can approve the drug," Khan said. And in the same interview, Stephen Khan said that the approval of the new vaccine can not get under pressure from US President Donald Trump, who previously promised the vaccine to Americans until November 3. "This will not be a political decision," Khan said. However, we believe that this will be a "political decision". Trump, who just criticized the Russian vaccine a few weeks ago, which also did not pass all the necessary tests, can now praise and promote the American vaccine, similar to the Russian one. One of the main challenges in developing any vaccine is time. For example, large-scale human testing involves not only testing itself, but also identifying side effects and finding an answer to the question: is the vaccine suitable for all categories of people? It can take up to a year to collect this type of information, as many side effects can occur in a few months. Thus, a truly safe and effective vaccine should not be expected before 2021. Trump's haste is clear even to a child. The American President feels that he is losing the election, so he decided to focus on an issue that could turn the attitude of American voters on its head. We have little doubt that the coronavirus vaccine in America will be approved before November 3.

As for the political ratings of Donald Trump, they remain very low, as for a candidate for a second term of the presidency. For example, a little more than two months before the election, the American magazine The Economist gives an 87% chance of winning Joe Biden and a 98% chance of winning the general vote. According to the magazine's analysts, Biden can get 340 votes, while 270 will be enough to win. Other forecasts of American publications also predict Biden's victory, although not so devastating. On average, Biden continues to outperform Trump in the ratings by 10-12%.

From all of the above, it follows that the situation in the United States remains tense and does not improve, and does not change. However, things are not getting any more optimistic in Britain either. So we are very surprised to see how much the British pound is growing. However, the case is the euro currency. In the European Union, everything is relatively calm, GDP losses in the second quarter are relatively small (relative to American losses), and the "coronavirus" was still suppressed. But the British economy leaves many more questions unanswered. However, it is the US currency that continues to fall in price, and very much so. Thus, in the current situation, we continue to recommend traders to trade on the trend. The fundamental background does not speak clearly in favor of the pound, however, market participants continue to buy this currency. This is especially true for large market participants and non-commercial traders. Most likely, the new COT report will show a strong increase in the net position of the "Non-commercial" category. From a technical point of view, both linear regression channels continue to be directed upwards. 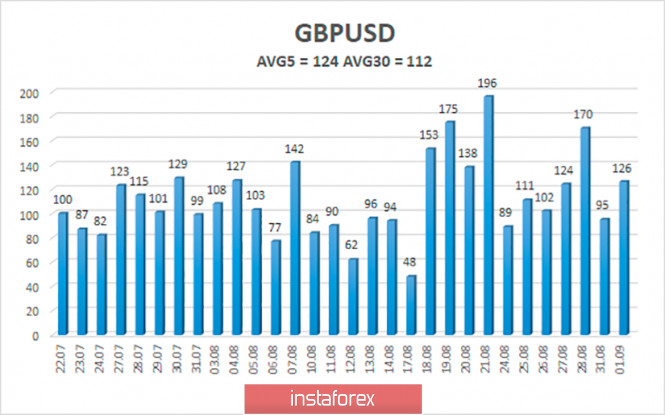 The average volatility of the GBP/USD pair is currently 124 points per day. For the pound/dollar pair, this value is "high". On Wednesday, September 2, therefore, we expect movement within the channel, limited by the levels of 1.3257 and 1.3508. A reversal of the Heiken Ashi indicator to the top will indicate a possible resumption of the upward trend.

The GBP/USD pair started a round of correction movement on the 4-hour timeframe. Thus, today it is recommended to wait for the completion of this correction and open new long positions with the goals of 1.3367 and 1.3428 after the reversal of the Heiken Ashi indicator upward. It is recommended to trade the pair down with the targets of 1.3184 and 1.3123 if the price returns to the area below the moving average line.

Interesting? Write a comment below.
 #Overview of the GBP/USD pair. September 2. Negotiations on the relationship between Britain and the European Union can begin
Forward 
Backward 