Overview of the GBP/USD pair. September 21. The UK will lose much more from the lack of a Brexit deal than from the "coronavirus 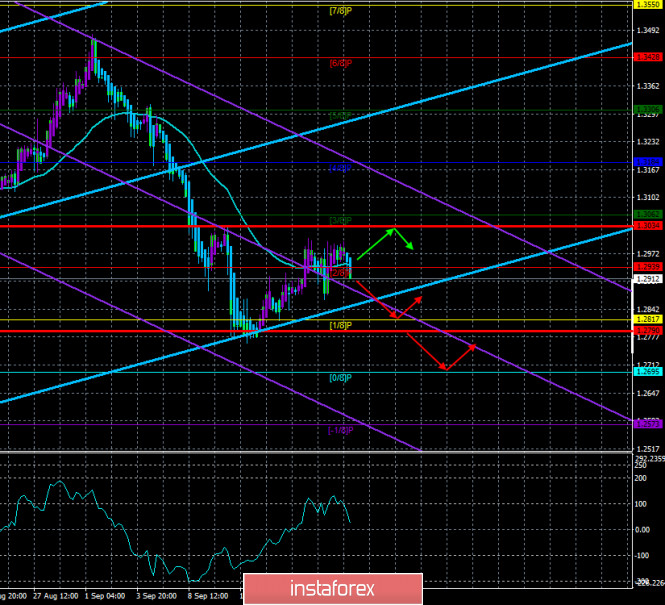 After the British currency collapsed by 700 points down, a correction began, which continues to this day. Quotes of the pound/dollar pair broke the moving average line, but could not go far up. Thus, the downward trend may resume in the near future. However, there are questions here. The first round of the downward movement was frankly provoked by the fundamental background from the UK. Thus, for the same strong and powerful fall of the British pound in the second round, new fundamental reasons are needed, which are not yet observed. Thus, further downward movement may be quite weak, since all the problems of the US have not gone away, which means that demand for the dollar may begin to fall in the near future. As for the bill "on the internal market of Great Britain", which "started all this mess", the markets realized that so far London has not violated any international agreements, and Boris Johnson can use this law as blackmail or bluff in negotiations with the European Union. Thus, it is absolutely not necessary that London will go to conflict with the European Union at all. Boris Johnson cannot fail to understand all the consequences of this step.

Meanwhile, expert agencies and economists continue to calculate the possible damage from the UK's exit from the EU without a deal. It turned out that the damage from the lack of a trade agreement will be much higher than the damage from the "coronavirus crisis". Recall that Britain suffered a record contraction in the economy, falling by 20% in the second quarter. Now it turns out that the losses from a "hard" divorce from the EU will be even worse. In fact, this is what we have been talking about in recent years. The British economy is suffering huge losses just because the Brexit process is launched. After the UK leaves the EU and officially loses access to the free market, the economy will lose billions of dollars more. The trade turnover with the European Union will be reduced, and the British government is still unable to offer new markets to British businessmen. Only a couple of weeks ago, it became known about the conclusion of a free trade agreement with Japan, which is only 15 billion dollars. This is the first agreement signed by an independent London. Experts from the investment bank Goldman Sachs conducted research and found that the long-term consequences of not having a deal with the EU are two or three times greater than the damage caused by the "coronavirus crisis". Thus, the prospects for the British economy remain vague, and with the arrival of 2021, the British economy may experience another shock. At the same time, do not forget that just a couple of days ago, Boris Johnson announced that the second "wave" of the COVID-2019 epidemic has begun in the country. Thus, it is absolutely possible that even before the onset of 2021, the UK economy will begin to slow down. In general, if we look at the long term, we would make a forecast that it is the British currency that will remain prone to falling.

There are no major macroeconomic events scheduled for the first trading day of the new week in the UK. Thus, the entire fundamental background of the day will be reduced to the performance of Jerome Powell. 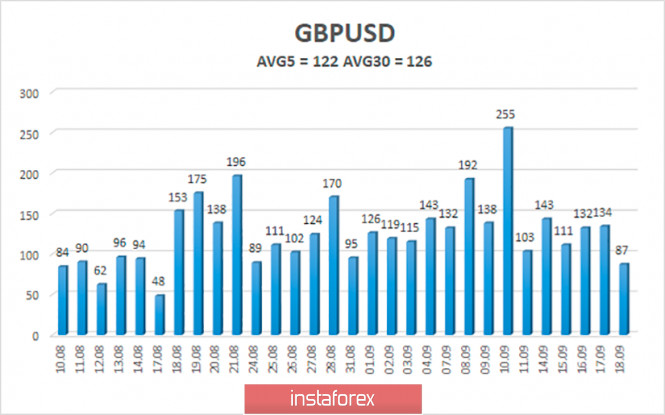 The average volatility of the GBP/USD pair is currently 122 points per day. For the pound/dollar pair, this value is "high". On Monday, September 21, therefore, we expect movement inside the channel, limited by the levels of 1.2790 and 1.3034. The reversal of the Heiken Ashi indicator downward may signal about a possible resumption of the downward movement.

Interesting? Write a comment below.
 #Overview of the GBP/USD pair. September 21. The UK will lose much more from the lack of a Brexit deal than from the "coronavirus
Forward 
Backward 