Overview of the GBP/USD pair. September 22. America is preparing for lengthy legal proceedings at the end of the 2020 presidential 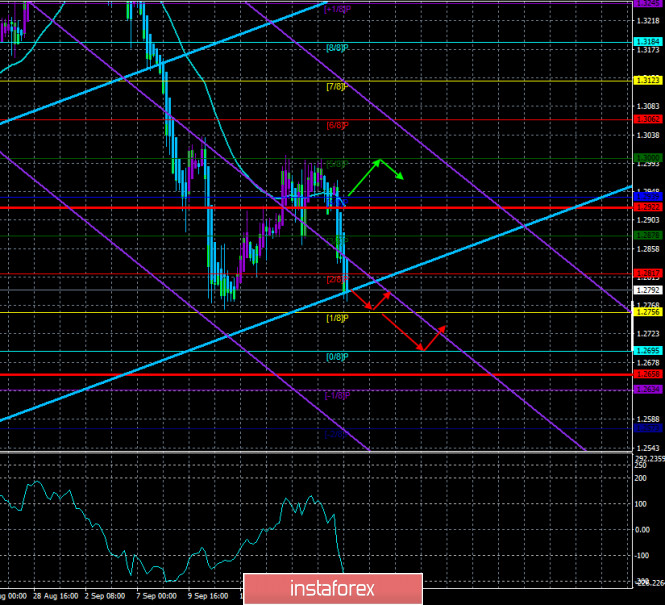 The British pound also spent the second trading day of the week in a downward movement. Thus, at the beginning of the new trading week, demand for the US currency increased significantly. With the British currency, everything is clear. In September 2020, this currency is only getting cheaper mainly due to the actions of the British government and Boris Johnson personally. However, we have already talked about this many times. The reasons for the fall in the British currency yesterday was quite difficult to find. In the States today, there were no important publications, no important speeches, and even the news flow from the White House was quite sparse. Well, the markets could not react so violently to another statement by Donald Trump about "the imminent creation of a vaccine against coronavirus". However, the US dollar has grown and we need to accept this. Sometimes there are situations when there are no visible reasons for the growth of a particular currency, however, the growth itself is there. We remind market participants that in addition to private small traders, there are a large number of major traders on the market (COT reports are just for them). It is these major traders who "rule the ball". Further private small traders can only join the trend that is formed by major players. That's why they always say that you need to trade according to the trend. Thus, it is possible that at the beginning of the new week, major traders began to buy the US currency. This led to its strong strengthening. We also remind you that both the pound and the euro grew for a long time against the dollar and were quite overbought. In the case of the euro, the growth was just very long and strong. In the case of the pound, it was almost groundless, since the economic situation in the UK is not much better than the American one. Thus, in both cases, the strengthening of the US dollar could be expected.

Meanwhile, the number one topic in the United States remains the 2020 presidential election. The issue of elections has taken a very interesting turn in recent days. The fact is that one of the nine Supreme Court Justices of the United States, Ruth Ginsburg, died recently. As usual in America, various speculations immediately began around a rather mournful event. The fact is that in the United States, almost no one believes that the elections will be held quietly and calmly, and most importantly - honestly. Most experts and political scientists believe that none of the candidates will accept defeat and are almost guaranteed to accuse the opposite side of fraud. Recall that the Democrats have won the right to vote by mail. At the same time, the Trump electorate is expected to vote in reality. Consequently, a sharp increase in Trump's position is expected first, after which "postal votes" will be counted for at least a few days. Trump accuses Democrats of simply printing the number of ballots they need to win. Thus, there is a high probability that the case of the presidential election will end up in court that lost one of its nine judges the other day. With the election still 6 weeks away, Donald Trump is already pushing to appoint a new judge to replace Ms. Ginsburg. Further, Joe Biden and the Democratic Party oppose such a decision, because they believe that elections should be held first. And as soon as we see a clash of interests, we can immediately assume a "behind-the-scenes game". Since the 2020 election is highly likely to end in court, every presidential candidate needs to have support in this very court. As we remember, there are only nine judges, and four of them are Democrats and five are Republicans. Although Donald Trump has the advantage here, Chief Justice Roberts has recently voted against any decisions of the current president. It turns out that Joe Biden has a margin of one vote at this time - 5:4. However, with the death of Judge Ginsburg, who was a Democrat, the opportunity opened up for Trump to appoint "his" judge to the vacant position, as loyal as possible to him. Thus, it is clear why Trump now wants to quickly appoint a new judge, and the Democrats are opposed. Some experts still recall the "gentleman's rules" that once operated in high political circles. However, all as one note that now there is a full-scale war for power in America, where there is no place for any concessions and displays of honor. Thus, the intrigue of the coming weeks shifts to the US Supreme Court and the decision of Congress to appoint a new judge. We just note once again that the topic of elections in America is the most important at this time. All traders can see for themselves what a battle is raging around the president's chair. Any methods are used, and each side tries to use any event to its advantage.

So far, the US dollar has not reacted to events related to the elections. However, it should be understood that this is a "long-playing" topic. We have repeatedly said that the international policy of this country over the next four years depends on who becomes the new president of the United States. And as Donald Trump showed us, in four years you can have time to accelerate the economy to unthinkable values and lose all progress, sliding into the worst recession in the last hundred years. That is why China, for example, actively supports Joe Biden, because it believes that it will be much easier to negotiate with him, while Trump has already announced the continuation of the war against Beijing. Also, the American economy depends on who will become the next president of the country, for which it is now extremely important to do without new government mistakes. Further, the country's economy directly depends on the "coronavirus" epidemic, the fight against which Donald Trump lost outright (still rating the actions of his administration at "5+"). So this is an extremely important question. 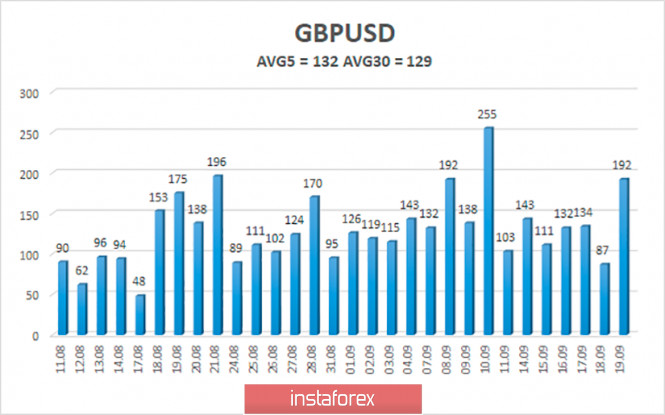 The average volatility of the GBP/USD pair is currently 132 points per day. For the pound/dollar pair, this value is "high". On Tuesday, September 22, thus, we expect movement inside the channel, limited by the levels of 1.2658 and 1.2922. A reversal of the Heiken Ashi indicator to the top signals the beginning of an upward correction.

The GBP/USD pair resumed a strong downward movement on the 4-hour timeframe. Thus, today, it is recommended to keep open short positions with targets of 1.2756 and 1.2695 as long as the price is below the moving average and the Heiken Ashi is directed downward. It is recommended to trade the pair for an increase with targets of 1.3000 and 1.3062 if the price returns to the area above the moving average line.

Interesting? Write a comment below.
 #Overview of the GBP/USD pair. September 22. America is preparing for lengthy legal proceedings at the end of the 2020 presidential
Forward 
Backward 