Overview of the GBP/USD pair. September 23. The speeches of Jerome Powell and Andrew Bailey did not add clarity to the markets. On the third trading day, the British pound traded in a downward movement again, although it made a significant upward leap during the day. Such versatile trading and sharp changes in the direction of the pair's movement during the day were caused by two speeches by the heads of central banks (America and the UK). Recall that last week, with a difference of one day, meetings of the Bank of England and the Fed were held, during which all the parameters of both monetary policies remained unchanged. But if Jerome Powell was optimistic enough in his statements, Andrew Bailey was not. However, neither the first nor the second event had a special impact on the movement of the pound/dollar pair. For the British currency, the topic of the lack of a free trade agreement with the European Union, as well as the resonant bill of Boris Johnson, which can finally divide Brussels and London, remains much more important. Thus, we can make almost one hundred percent conclusion that the British pound resumed falling based on this fundamental background, although there have been no new reports on the two above-mentioned topics in recent days. We also remind you that the euro/dollar remains flat for two months, which is not observed for the pound/dollar pair.

Jerome Powell's speech to the US Congress was expected by traders, as well as any of his other speeches. However, we have warned in our recent articles that it is unlikely that Jerome will report anything fundamentally important and new, since just recently the Fed meeting took place, after which he could report everything that was required. According to Powell, the risks to the US economy remain extremely high. Financial assistance ($4 trillion approved by the US Congress in March) has had a mitigating effect on the consequences of the "coronavirus epidemic". However, the future of the US economy depends entirely on how well the fight against the epidemic is conducted in the future. Powell stressed that the pandemic has not gone anywhere, and there was no end to the "wave". States continue to be in a permanent state of development of the epidemic. The head of the Fed also noted that recently there has been an improvement in macroeconomic indicators, which, however, should not be misleading, since the "lockdown" is over, and the economy would have revived after that in any case. Powell is very concerned about the country's unemployment rate, which remains well above pre-crisis levels. The head of the Federal Reserve has also stated several times that before the complete victory over the "coronavirus", it makes no sense to expect a full recovery in business and economic activity. In other words, the US economy will not be able to return to pre-crisis levels until there is a complete victory over the pandemic. Powell also called on the US Congress to consider and approve a new package of assistance to the US economy, which will go to support those industries that have suffered the most from the pandemic.

In principle, Powell's speech fairly accurately reflects our own opinion. We have repeatedly stated that the most important thing for America is the confrontation with the "coronavirus". Donald Trump failed to fight the epidemic, perhaps Biden will be able to cope with it. In any case, the approach needs to be changed, as 40-45 thousand new cases of the disease continue to be recorded daily in the United States.

Jerome Powell's colleague Andrew Bailey also made an interesting statement. The head of the Bank of England said that in the near future, the regulator is not going to resort to the introduction of negative rates, although this topic has been discussed by traders and economists for several months. Recall that many market participants believe that sooner or later the Bank of England will have to resort to this step since the economy fell by a record 20% in the second quarter, and the risks of the UK leaving the EU without a "deal" are growing every day. Moreover, thanks to Boris Johnson and his new bill "on the national market of Great Britain", the chances of a quarrel with the alliance are also growing, which will undoubtedly affect the British economy. Thus, many traders are waiting for new stimulating steps from the BA. They are equally waiting for a reduction in the key rate and an expansion of the quantitative stimulus program. Thus, Andrew Bailey refuted traders' expectations for the rate in the near future. "It would be a mortal sin to say that we have a tool that we can't put into practice," the BA chief said. Bailey also added that the regulator's statement following the September meeting was only intended to make sure that banks are ready to switch to negative rates.

Meanwhile, the most famous American publication the Washington Post reports that during the reign of Donald Trump, the "prestige" of the United States fell. Although the President regularly declares in his interviews that he has returned America to its "former greatness", practice shows that the opposite is more likely the case. A study conducted this summer shows that the attitude of countries such as France, Canada, Japan, Australia, France and other "first players" of our world has fallen to the lowest level in the last 20 years. The approval rating, therefore, is 34%, although in 2016 it was less than 52%. 86% of respondents said that America has completely lost the fight against the epidemic. Further, the biggest reason for the unpopularity of the United States is called Donald Trump. It should also be noted that all the leaders of the "Big Eight" scored more approval ratings than Trump.

As for the near-term outlook for the pound/dollar pair, it is likely to remain downward. Too many negative things are happening in the Foggy Albion right now. In the United States, as we have repeatedly noted, there are also enough problems, however, the UK managed to "surpass" America. At the same time, almost all the problems in Britain are "short-playing" in nature. In other words, they may start to have an impact (or they already do) on the economy in the very near future. Thus, the outlook for the pound remains even bleaker than for the US dollar. However, both of these currencies are still absolute outsiders in 2020. From a technical point of view, the downward trend resumed after a minimal upward correction. Bulls finally left the market as the pound has been rising since March 20. Further, we have repeatedly said that its growth cannot be called fully justified. 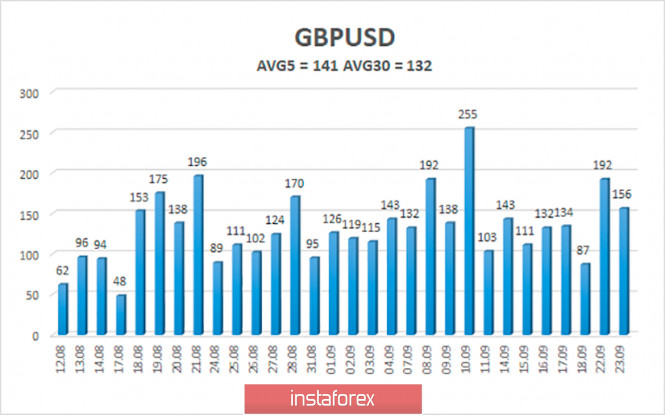 The average volatility of the GBP/USD pair is currently 141 points per day. For the pound/dollar pair, this value is "high". On Wednesday, September 23, thus, we expect movement inside the channel, limited by the levels of 1.2593 and 1.2876. A reversal of the Heiken Ashi indicator to the top signals the beginning of an upward correction.

The GBP/USD pair resumed a strong downward movement on the 4-hour timeframe. Thus, today it is recommended to keep open short positions with targets of 1.2695 and 1.2634 as long as the Heiken Ashi indicator is directed downward. It is recommended to trade the pair for an increase with targets of 1.2939 and 1.3000 if the price returns to the area above the moving average line.

Interesting? Write a comment below.
 #Overview of the GBP/USD pair. September 23. The speeches of Jerome Powell and Andrew Bailey did not add clarity to the markets.
Forward 
Backward 