Overview of the GBP/USD pair. September 24. The main outsiders of 2020: the US dollar and the pound 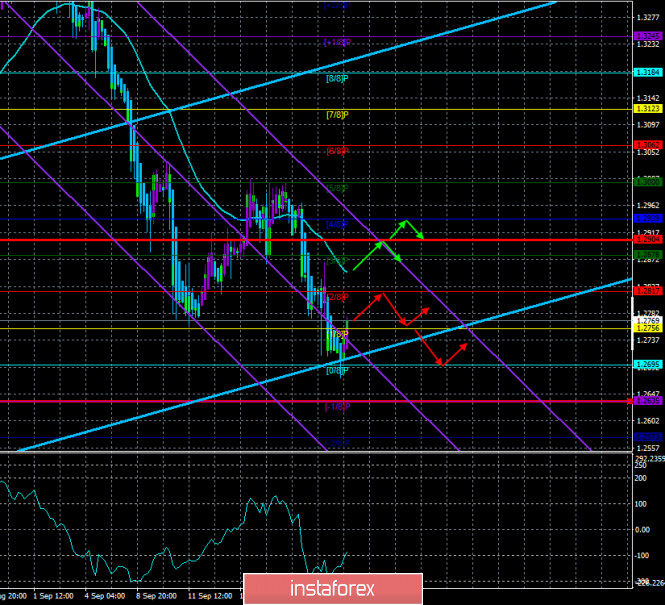 The British pound spent the third trading day of the week in a slightly weakened downward movement. The pair's quotes fell to 1.2700 and could not continue moving down. Thus, the US currency retains an advantage over the pound, but now it does not look as convincing as a couple of weeks ago. How can we not remember and compare it with the movement of the euro/dollar pair? The European currency has lost at most 250 points if you count from the last high of the price. That is, it is only the pound sterling that has fallen in price against the currently weak US dollar. We have already repeatedly discussed the reasons for this. And now, it seems that the markets have completely worked out all the negative from the UK and are now thinking about what to do next? Just at this moment, the information "arrived" that the final vote on "Johnson's bill" will be held no earlier than December-month. This was stated yesterday by the British newspaper The Times, whose opinion can be trusted. The publisher reports that in this way London will try to ease the tension that has arisen in the negotiations with Brussels. We have our point of view.

We believe that Boris Johnson is simply trying to put pressure on Brussels with a new bill that allows a violation of the current agreement on the Northern Ireland border. Now it has become clear and obvious. First, Johnson announced this high-profile law, and now it will be "finalized" by the Parliament until the EU summit in mid-October, as well as before the deadline for negotiations with Brussels, which was set by Johnson himself. Thus, when the deadline expires and the EU summit is passed, it will already be known for sure whether a deal will take place between the UK and the EU. And if not, Johnson will be able to push his bill through Parliament. Now it seems to give the European Union an opportunity and a chance to "come to its senses" and be more accommodating in the remaining weeks of negotiations as if showing that London is not afraid to go into open conflict with the European Union and violate the principles of international law. From our point of view, such a strategy is a failure. It is suitable for beginners in chess or poker, but not for the Prime Minister of Great Britain. The essence of any bluff is that the opponents do not understand that it is a bluff. In the case of Boris Johnson, the opposite is true. His "hidden" actions are obvious to everyone. The whole world understands that Johnson can go to such a violation of the current agreement, however, this will harm first of all himself and his country. Further, Brussels will not follow the lead of 10 Downing Street. Because in this case, Boris Johnson will start "twisting the ropes" from the European Union, each time coming up with new threats and opportunities for pressure and blackmail. In doing so, it harms the whole of the UK, which is simply losing its international reputation and credibility. But the country still has to conclude trade agreements with many countries of the world after the final break with the EU. What will these negotiations be like if everyone in the world understands that at any moment London can violate any agreement? It also harms itself and its reputation. Johnson's political ratings are already declining, as the British are not happy with the way the government conducted the fight against the "coronavirus", the fact that the second "wave" has now begun in the country, which means that new strict restrictions will be introduced and many fines for non-compliance with quarantine measures will already be increased. Moreover, already in mid-September, the incidence rates in the UK almost reached the maximum values of the spring. What will happen next? This is a matter of life and health for the British nation. People in the UK can't help but understand this, and most likely, the stronger the second "wave" is, the more displeasure there will be with Boris Johnson's rule.

According to the Prime Minister himself, "it is time for everyone to show discipline, determination, and a spirit of unity to get through this". A beautiful pathos speech, in the best traditions of Johnson's "big brother" Donald Trump. The American President also knows how to talk beautifully and forget that it is the States that are in the first place in the world in terms of morbidity and mortality from COVID-2019. Boris Johnson also promised not to introduce a "hard" quarantine or a full "lockdown", however, in our humble opinion, if the wave is strong, he will have to do it. Thus, a new page of hard tests begins for the British economy, as well as for the British Prime Minister, who still has very few victories in office.

Thus, in the near future, the pound may remain under market pressure, solely due to the growing new wave of the pandemic. The more cases of the disease are recorded every day, the more likely it is that the British currency will fall further. As for other factors, there is no new data yet. Both the British pound and the US dollar remain in limbo. Traders in both currencies fear an uncertain future, which is expressed in the UK by the unknown scale of the second "wave" of the pandemic and, accordingly, the unknown timing of monetary policy easing by the Bank of England. Also, it is unclear what the real economic consequences of a British exit from the EU with no free trade agreement, and what are the consequences of the implementation of the law "on the domestic UK market". In the situation with the US dollar, there are even more unanswered questions. It is unclear how the election will end. It is unknown when the first "wave" of the "coronavirus epidemic" will end. It is unknown whether Republicans and Democrats will agree on a new package of assistance to the American economy. In general, in the next two or three months, until the new year 2021, both the pound and the US dollar may significantly fall in price. Everything will depend on the current fundamental background.

From a technical point of view, a round of upward correction to the moving average line may now begin, but we do not see why the British currency can continue to strengthen above the moving average. Accordingly, we expect the resumption of the downward trend, which is already signaled by the lower channel of linear regression directed downwards. 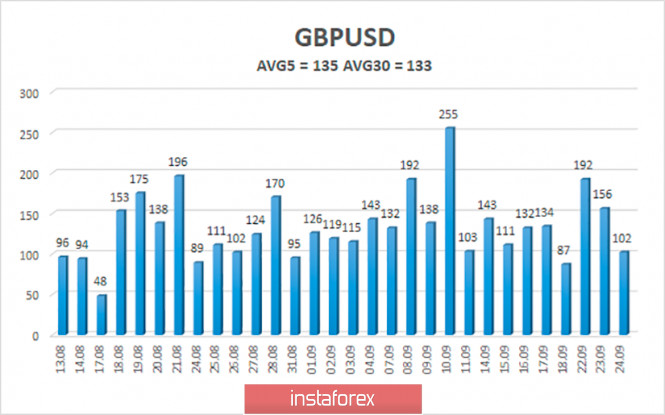 The average volatility of the GBP/USD pair is currently 135 points per day. For the pound/dollar pair, this value is "high". On Thursday, September 24, thus, we expect movement inside the channel, limited by the levels of 1.2634 and 1.2904. The reversal of the Heiken Ashi indicator back down to signal the completion of the spiral upward correction.

Interesting? Write a comment below.
 #Overview of the GBP/USD pair. September 24. The main outsiders of 2020: the US dollar and the pound
Forward 
Backward 