Overview of the GBP/USD pair. September 28. The pound has more bad long-term prospects than the US currency. 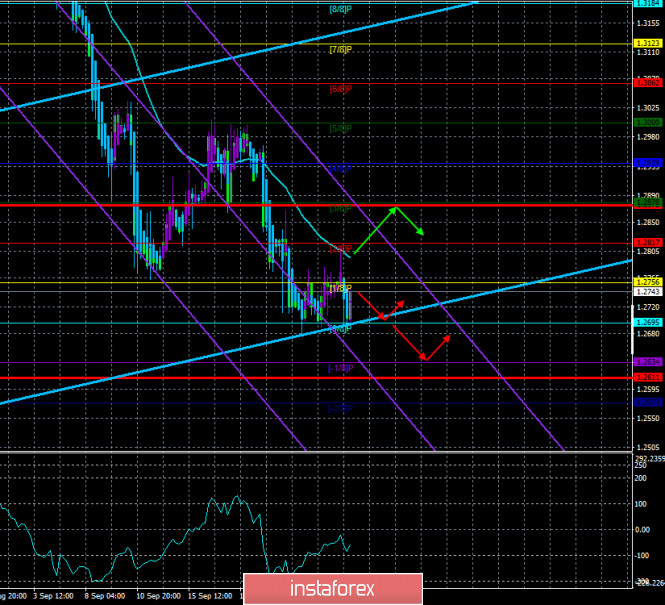 For the last three trading days of last week, the British pound was trading quite calmly in a narrow price range. In fact, all trades were held between the Murray levels of "0/8" - 1.2695 and "1/8" - 1.2756. The pair broke out to the moving average line once, bounced off it, and resumed a semi-sideways movement. Thus, the fall of the British pound temporarily stopped. We remind you that it is the US dollar and the British pound that remain the main "losers" of 2020. At least, judging by the events of the last 6 months in the UK and the US. However, the pound/dollar pair cannot standstill. For a while, there may be a flat, however, it is not constant. Thus, with an absolutely negative background from the UK and the same background from the US, the pair should still move in one direction. It remains only to determine which one.

The simplest way to do this is technical analysis. For example, when the pair's quotes are below the moving average line, you should trade lower. The mood of traders, both large and small, can change at any time. There is no way to predict this. However, traders still react sluggishly to macroeconomic statistics. Thus, we can only track the overall fundamental background and only try to predict how it may affect the overall mood of market participants.

Unfortunately, things are just as bad in Britain and the US right now. This applies to almost all aspects of the country's life. Starting from the "coronavirus" epidemic, ending with political crises. Of course, the situation is still different. For example, in the US, the first "wave" of the pandemic, which began in March, is still ongoing, and in the UK, the second "wave" began a couple of weeks ago. In Britain, the number of diseases is increasing daily. On September 25, a new anti-record was set - almost 7,000 cases per day. In the States, everything is a little better – "only" 40,000 diseases per day. "Better" – because a few weeks ago, 60,000 were recorded. As for political crises, of course, in fact, they are not. In general, the concept of "political crisis" is very vague and each author or analyst puts his own meaning in it. However, we believe that if the government does not show high results of its work, and approval ratings fall to 30% (and this applies to both Trump and Johnson), then there is a political crisis in the country. We can even say that the States were more fortunate. Trump may leave as early as January 20, and Joe Biden will take his place. Thus, the question is only in the Americans themselves. If they vote for Biden in the majority, then no courts, no proceedings will be able to influence the results later. If Biden wins by a margin of 100-120 votes (recall that the electoral system in the United States is special, "electoral votes" are considered to be distributed in unequal proportions among all States), then no court will recognize that the vote was dishonest. Thus, the fate of the future of the United States is literally in the hands of the American people. The same cannot be said for the British, who managed to put all power in the hands of Boris Johnson over the past year. The British Prime Minister was appointed to his post only last year, which means that he can lead the country for several more years (provided that the Conservative Party fully supports him). Thus, it is in Britain that it is unlikely that anything will change dramatically in the near future.

Well, 2021 for the States can really be a year of growth (in our opinion, if Biden wins the election), however, it can be a year of a new fall for the UK since there was no free trade agreement with the European Union or the States. It is impossible to predict when and how the COVID-2019 epidemic will end, and how many more victims it will have in the Foggy Albion. Well, Boris Johnson's actions are even harder to predict than answering the question: "When will the pandemic end?" Recall that this year, Johnson may not just "go in different directions" with the European Union, but completely fall out with it. Thus, it will be extremely difficult for him to sign an agreement with Brussels in the future. However, from our point of view, if this happens, it may also be the first step for Britain on the road to liberation from Boris Johnson. To do this, Johnson must lose the internal support of his party. In principle, his bill "on the free market" was not supported by anyone except his own party members, and even then not all of them. Thus, we believe that with this bill, Johnson first of all cast a shadow on himself. He simply showed that he could easily violate the principles of international law. Who would want to negotiate anything with such a leader? Such is the sad news from London. 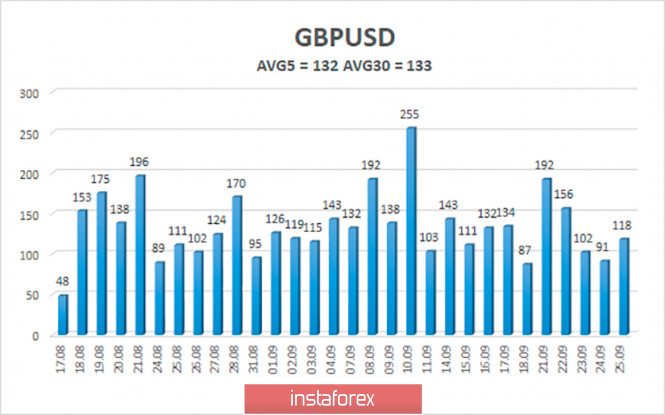 The average volatility of the GBP/USD pair is currently 132 points per day. For the pound/dollar pair, this value is "high". On Monday, September 28, thus, we expect movement inside the channel, limited by the levels of 1.2611 and 1.2875. The reversal of the Heiken Ashi indicator back down may signal about a possible resumption of the downward movement.

The GBP/USD pair continues to adjust on the 4-hour timeframe, mostly sideways. Thus, today it is recommended to open new short positions with targets of 1.2695 and 1.2634 as soon as the Heiken Ashi indicator turns back down or the price bounces off the moving average line. It is recommended to trade the pair for an increase with targets of 1.2875 and 1.2939 if the price returns to the area above the moving average line.

Interesting? Write a comment below.
 #Overview of the GBP/USD pair. September 28. The pound has more bad long-term prospects than the US currency.
Forward 
Backward 