Overview of the GBP/USD pair. September 29. Confidence in Boris Johnson continues to fall. 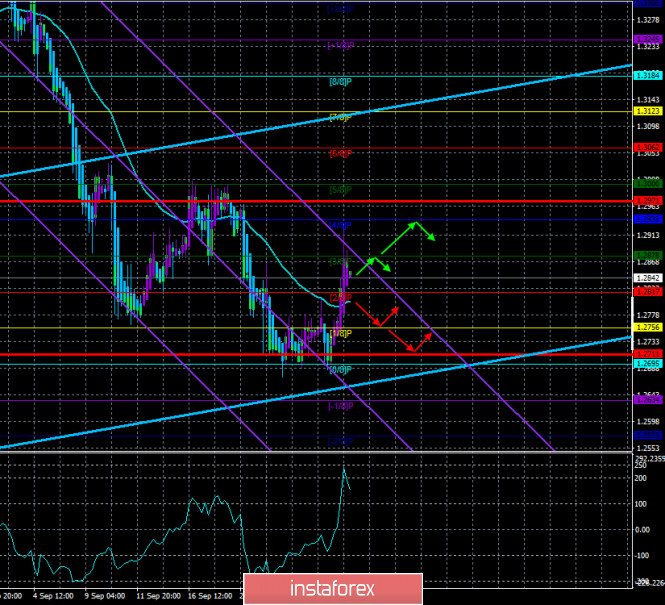 On Monday, September 28, the GBP/USD pair was in a fairly strong upward movement. The pair's quotes at the end of the previous week stood firmly in one place and failed to gain a foothold below the Murray level of "0/8" - 1.2695. Thus, we can even assume at the moment that the downward movement is complete. However, if the US dollar looks frankly weaker when paired with the euro currency, then the big question is which currency is less in demand in the market when paired with the pound sterling. Recall that the latest COT reports on the pound showed a sharp reduction in both long and short positions, which means that major players get rid of any contracts for the pound, simply not having the desire to deal with it. Further, this behavior of professional market participants is not at all surprising. We have repeatedly spoken about the uncertainty surrounding the future of America. Thus, the uncertainty surrounding the future of the UK is even "more uncertain". Thus, it is even difficult to give preference to one of the currencies in the pound/dollar pair, so we recommend that traders pay special attention to the technical picture.

As for the fundamental background, it does not change for the British currency. From our point of view, the most interesting process in the UK now is the systematic decline in the political ratings of Boris Johnson and the government as a whole. The British are dissatisfied with the way the government handled the first "wave" of the epidemic. Now Boris Johnson has announced a second "wave", tightened quarantine measures, increased fines for non-compliance with these measures, and recorded an increase in the number of cases of "coronavirus" every day in the Foggy Albion. On September 25, an absolute anti-record was set – almost 7,000 cases. We have repeatedly tried to understand the question of what victories the British Prime Minister has won in more than a year of his rule. And they could only remember and come up with "the end of Brexit". Boris Johnson did not distinguish himself in anything else special. However, he collected a huge collection of defeats. We will not list them again. It seems that the British are also beginning to understand that Boris Johnson is exclusively a "Brexit option". Yes, Johnson did what Theresa May did not. However, the price that Britain will now pay seems to be better if Parliament agreed to Theresa May's proposals. Recent opinion polls show that Britons would not vote in such numbers for the conservatives if the parliamentary elections happened now. The conservatives would get 39% of the vote, while labor would get 42%. Of course, every poll has a margin of error. However, the general mood of the British is clear. They are dissatisfied with the "conservative government". Thus, many experts are already speculating about the likelihood of Boris Johnson resigning early. However, this task is not easy. Only his party members can dismiss Johnson. There is a certain discord and split in opinion among the conservatives, however, it has not yet reached its peak. The question is, will it reach?

Meanwhile, Boris Johnson himself called on the whole world to participate in the investigation of the causes of the "coronavirus". The British Prime Minister recalled that the entire world has suffered serious economic damage, and 1 million people have already died from the pandemic. Johnson also believes that "answering questions" is not necessary to "punish the perpetrators", but to "prevent this from happening again in the future." Johnson noted that over the past 8 years, there have been eight outbreaks of various diseases on Earth that could well become pandemics.

At the same time, the saga of the Brexit negotiations continues. According to British media, the final rounds of negotiations between Brussels and London will take place this week, attended by Michael Gove, a member of the UK Cabinet. Gove will negotiate directly with the Vice-President of the European Commission Maros Sefcovic. Thus, the groups of David Frost and Michel Barnier have pushed aside. Of course, it is reported that both sides will again try to agree on a deal, however, there are very few chances for a successful outcome of the negotiations. Boris Johnson refuses to make concessions and compromises on issues of fishing, the judicial system, European norms and standards, and others. Moreover, as we have repeatedly noted, London does not show a particularly strong desire to conclude any deal with the EU. The most interesting thing is that at the same time, the "Johnson bill" is under consideration in the House of Commons of the British Parliament. There will be no new vote in the near future, however, the situation with this bill is "hanging in the air", and at the same time "suspends" any negotiations with the European Union. Brussels has already stated that if this bill is passed, further negotiations with London will automatically become impossible, and the consideration of all disputed issues will flow from the offices of Brussels to the Court. Thus, this is another factor that practically puts an end to the success of negotiations on the conditions for the future coexistence of the UK and the European Union after 2021.

As we have already said, both the British pound and the US dollar look quite weak right now. The fact that the GBP/USD pair is still fixed above the moving average line gives a good chance of growth for the pound. However, to be honest, it is difficult for us to imagine that the markets are actively buying the pound. However, on Monday alone, the pound rose by about 200 points, which is a lot even for the pound. One way or another, you need to be ready for a strong movement in any direction. For the pound, the market is now very "thin", so volatility can grow, and the reaction to almost any important event can be very strong and sharp. 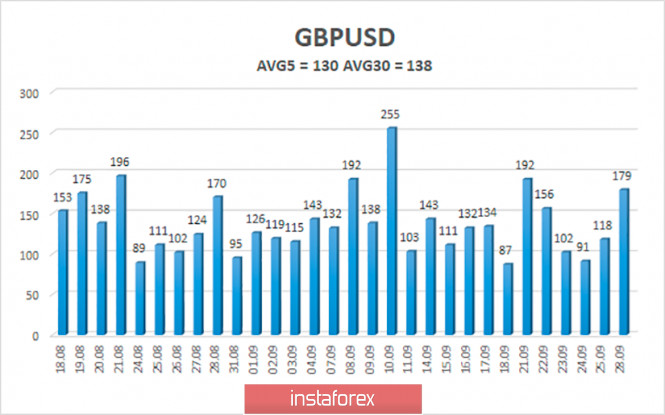 The average volatility of the GBP/USD pair is currently 132 points per day. For the pound/dollar pair, this value is "high". On Tuesday, September 29, thus, we expect movement inside the channel, limited by the levels of 1.2711 and 1.2971. A reversal of the Heiken Ashi indicator back down signals a possible resumption of the downward movement or a turn of the already downward correction.